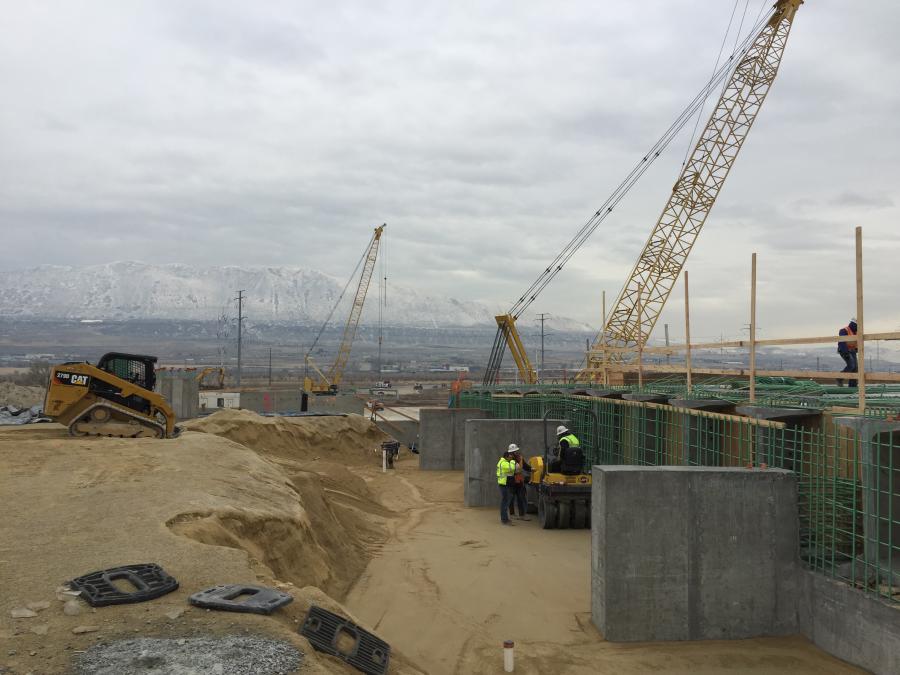 A new grade-separated interchange on Bangerter Highway in Utah's south Salt Lake Valley will tie into local roads on the north and south sides of the highway while improving traffic flow.

The $48 million Bangerter, 600 West Interchange Project kicked off last May and will continue through summer of 2017. The entire project is within the city of Draper.

Bangerter Highway runs east and west in the area and connects with heavily used Interstate 15. The highway was last upgraded in 1998.

The project, overseen by the Utah Department of Transportation (UDOT), will allow free east-west movements and improve safety and regional mobility.

When finished, Bangerter Highway will have three general purpose lanes in each direction plus auxiliary lanes.

The project also eliminates traffic signals from the intersection at 200 West, and only right turns at the 200 West and Bangerter Highway intersection will be allowed.

Traffic signals will be used at the bottom of the ramps of the new interchange.

“For years the 200 West intersection has caused congestion and backing onto I-15,” said Agustin Avalos spokesman of Utah Department of Transportation, Region 2. “UDOT is installing a new grade-separated interchange at 600 West that will address this issue. The new interchange will move heavy traffic movements a half mile away from the 200 West intersection. The 600 West interchange is one in a series of projects UDOT is investing in aimed at reducing travel times, connecting communities and improving overall safety on Bangerter.”

The project is being financed through state-allocated funding.

About 30 workers will be on the job each day.

Bangerter Highway moves an average of 58,000 vehicles per day. With continued growth on the west side of the Salt Lake Valley, that number is expected to double by 2040 and without major improvements, delays would increase by four times over the next 25 years.

The Utah Department of Transportation has begun making major improvements at various intersections along Bangerter Highway to reduce travel times and congestion, connect communities and improve overall safety along the corridor.

UDOT has 18 projects planned for Bangerter Highway. So far, two projects have been completed, five are funded and 11 are unfunded.

UDOT hopes to begin construction in 2017 on other projects totaling $208 million at similar interchanges on Bangerter at 5400 South, 7000 South, 9000 South and 11400 South. Construction at the four sites is scheduled for completion in 2018.

The work took place on eastbound Bangerter Highway at 600 West.

They have begun raising Bangerter Highway at the interchange to cross over 600 West. That includes installation of bridge structures and box culverts, new concrete pavement and drainage.

“With growth comes challenge,” Avalos said. “Rapid growth and development in the area mean existing conditions are always changing. The project team, owner and contractor have worked together.”

Avalos added, “Some of these changes have resulted in additional time and costs to the project. These obstacles are being handled through constant communication between all the parties affected.”

“New commercial and residential development is going in all along the corridor,” Avalos said. “The Utah State Prison is located just south of the project area and is expected to be moved to north Salt Lake Valley by 2020. This will make room for additional development south of the new interchange.”

Work is scheduled in a way that minimizes impacts to the traveling public.

Some lane changes on the highway will be necessary during construction. However, all lanes will be open during peak travel times from 6 a.m. to 9 a.m.

Monday through Friday eastbound; from 4 p.m. to 7 p.m. Monday to Friday westbound; and from 12 p.m. to 4 p.m. Saturday eastbound and westbound.

Lanes will be reduced by one to two lanes in each direction during off-peak travel times.

During construction, access to surrounding businesses will be impacted. The project team will be contacting businesses in the area to keep them informed.—CEG