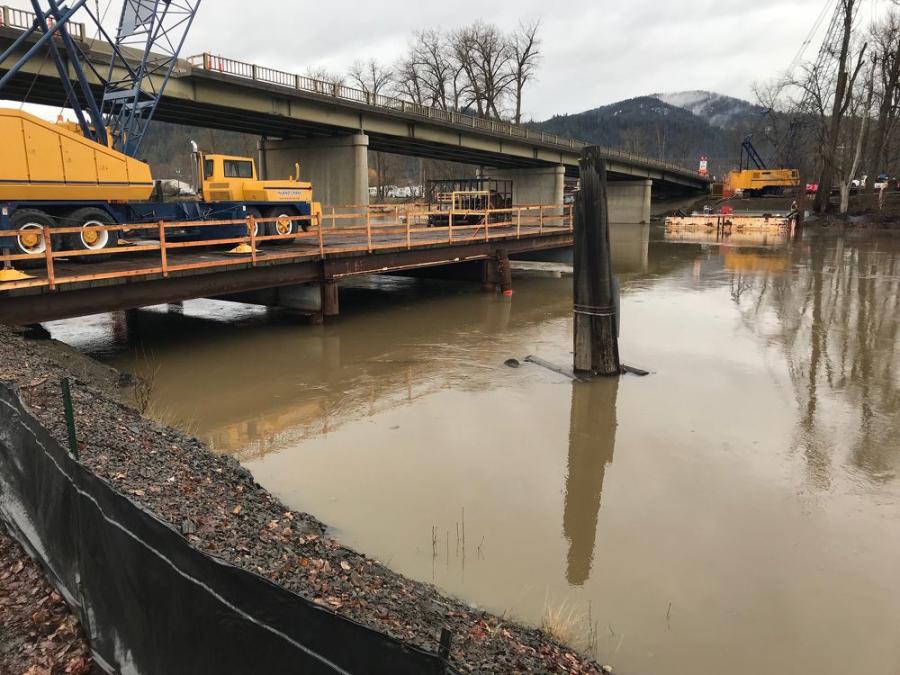 In addition to updating the aging structures, the new bridges will be able to support the heavier legal loads carried by modern trucks and provide a smoother driving surface, said Tanner Jared, a project supervisor of RSCI.

Construction crews are finishing work on two bridges in a design-build project in Northern Idaho. The project aims to replace the original structures on Idaho Highway 3 (ID-3) over the St. Maries Railroad and the St. Joe River that have outlived their 50-year design/service life.

The $17.3 million project was designed and is being constructed in a partnership with Record Steel Construction Inc. (RSCI) and J-U-B Engineers under a design-build contract administered by the Idaho Transportation Department. Both new bridges, one 437 ft. long and the other 115 ft. long, will feature two travel lanes, sidewalks and shoulders with additional improvements including reconstruction of the approaches to Railroad Avenue, East Meadowhurst Drive, as well as resurfacing signage improvements and guardrail and drainage improvements along Idaho Highway 3 near the bridge approaches. 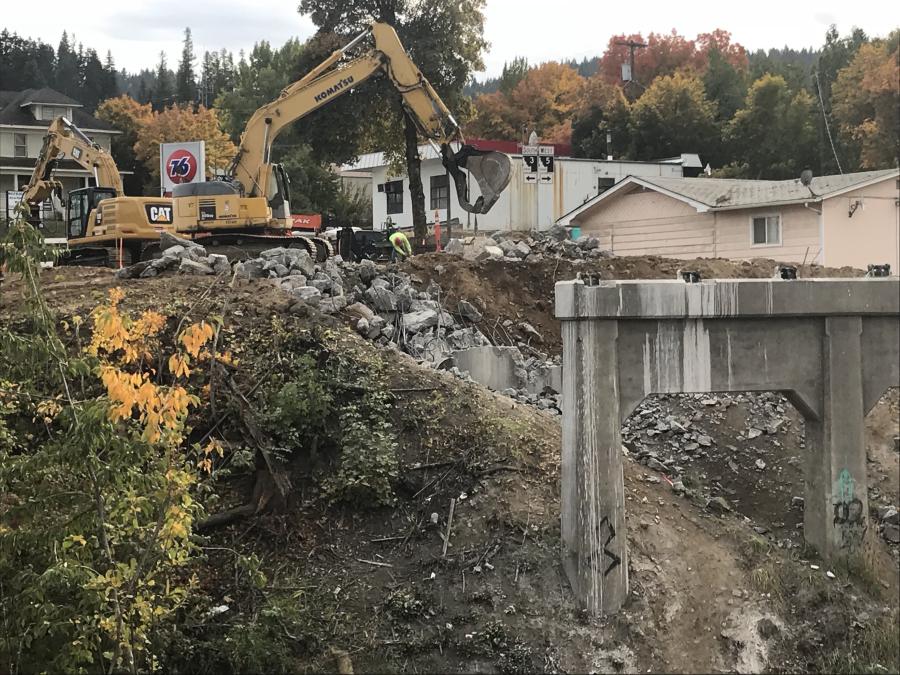 In addition to updating the aging structures, the new bridges will be able to support the heavier legal loads carried by modern trucks and provide a smoother driving surface, said Tanner Jared, a project supervisor of RSCI.

"We have two-thirds of the river bridge built," said Jared. "The plan was to come in and tackle half the river bridge opening so we had enough width that two cars could pass on it. Then open the railroad bridge. The initial plan has evolved. What we did was we worked on the river bridge, a steel girder bridge, and ended up having to use the future shoulder as a travel lane, but were able to get two lanes of travel. We tackled that, then detoured traffic so we could tackle the entire railroad bridge. We've got it to where we can put traffic on it, but there are still some construction components remaining to complete. They are essentially preparing for the final placement of the deck on river bridge. But we are just with a small crew right now. We're maintaining a project presence, but we don't want to pour the deck in cold temperatures and risk the cold shocking the concrete."

It is not always possible to build bridge foundations in bedrock. That was the case on this project because the bedrock was too deep. The design-build contractor bought a new Soilmec SC-120 specifically for the job in order to install drilled shaft foundations in soil. Drilled shafts were proposed by the design-build firm because they eliminated the need to install cofferdams, and minimized impacts to fish such as the Bull Trout, which are listed as an endangered species. 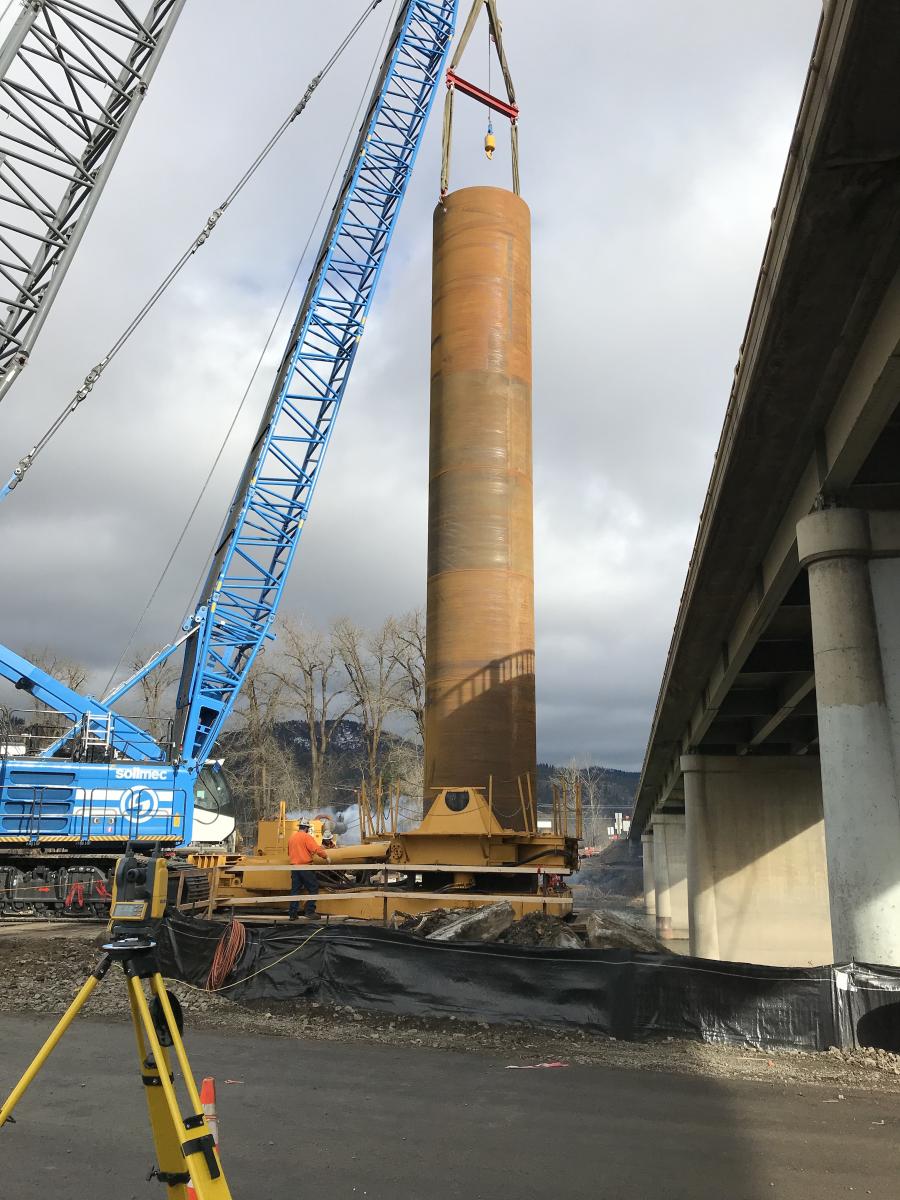 "These foundations are designed to bear in the soil using skin friction and end bearing," Jared said. "During excavation, the crane was equipped with a casing oscillator and a clamshell. The oscillator is an independent piece of equipment that is attached to the front of the crane and is used to guide the steel casing while applying massive amounts of downward pressure. The oscillator surrounds the outside of the casing, grabbing the circumference and twisting back and forth while continuing to provide downward force. After the casing is sufficiently deep into the earth, the crane's boom is equipped with a clamshell. The crane is then used to extract material from the inside of the casing. This process of driving then digging cycles until the casing has reached the required depth. After the target depth is achieved, the engineer of record (EOR) reviews the bottom of the shaft to ensure there is acceptable material to support the bridge structure. Once approval is received, the rebar cage is set and the shaft poured with concrete."

ITD chose to fast-track improvements to limit the duration and impacts of replacing these bridges in the heart of St. Maries. These two bridges are the sole route inter-connecting St. Maries across the railroad and river on the state highway system. To mitigate impacts as much as possible, the department outlined the need for the design-build firm to develop and engage a maintenance of traffic (MOT) working group made of a collection of stakeholders including law enforcement, first-responders, regulatory agencies, as well as local citizens and business owners. The MOT group was regularly updated on current and upcoming construction activities, and was invited to provide input and real-time feedback on traffic impacts and other concerns.

Through the innovative contracting that was allowed as part of this design-build, as well as the MOT working group, the project team remains more invested in the progress and results of construction, and engagement and communication with those directly impacted is ensured, and is more successful.

The project is expected to be finished early this summer.