One person’s trash is Zahlene Enterprises’ treasure. The Miami-based civil contractor,started by a Cuban immigrant, has developed a reputation for innovative approaches to aggregate recycling. 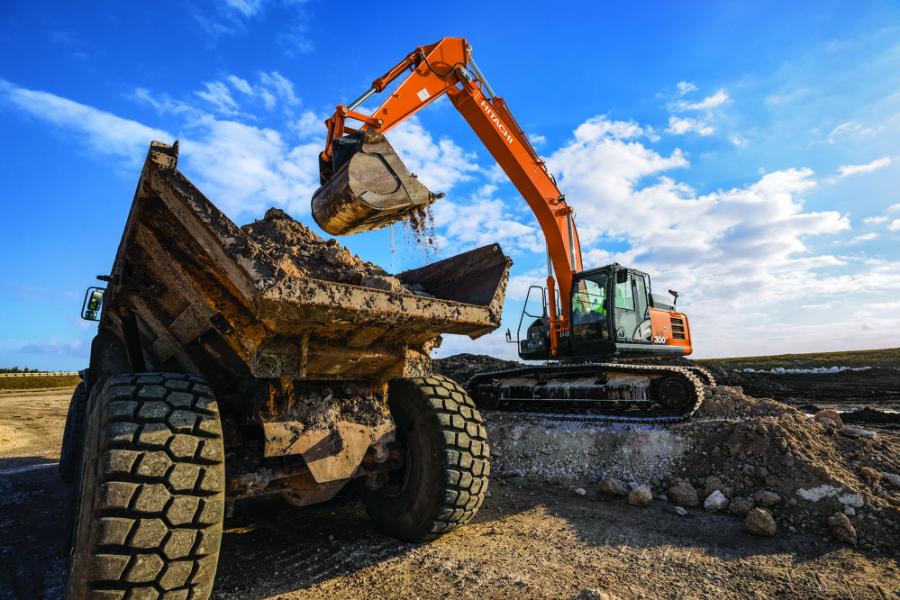 “Every load of material that I remediate and reuse is one load of virgin lime rock that can be used for cement or anything else,” Jordan Zahlene says.

At 27, Jordan Zahlene, vice president of Miami-based Zahlene Enterprises, has more certifications and credentials to his name than many of his peers who are twice his age.

Zahlene attributes much of that professional drive to his parents, Beatriz and Miguel. The Cuban couple immigrated to the United States in 1982 with hopes for a better life for their growing family. 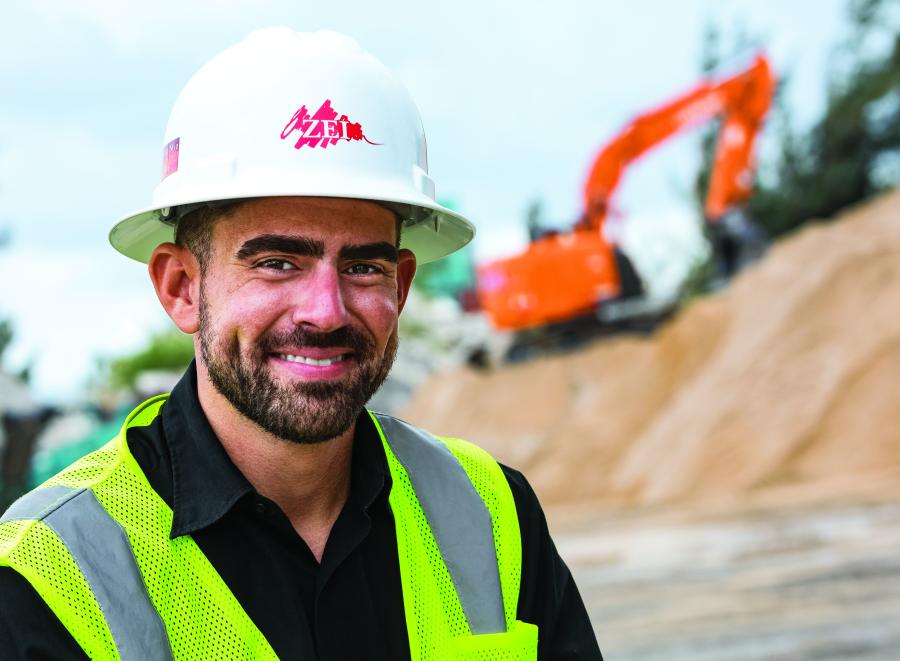 Those dreams were realized. Today Zahlene Enterprises Inc. (ZEI) has a fleet of roughly 52 pieces of equipment — 16 of which are Hitachi machines — and the company is one of the major civil contractors in Miami, known for its creative and innovative approaches to recycling aggregates.

"I'm the product of the American dream. We live in the only country in the world where you can achieve whatever you want and make a difference in the world and your community," Zahlene said.

But this success has not come without its challenges and heartbreaks along the way.

In 2006, Zahlene was a high school student at Miami Lakes Educational Center when he learned that his father, who had battled cancer, passed away in a tragic jobsite accident. Zahlene decided to attend college locally at Florida International University to take the helm of the family business.

"It was pretty scary," Zahlene said. "I was basically handed over a piece of property, four dump trucks, a makeshift screener and two very old loaders. It was also right when the market crashed. But we kept going and never gave up. At first it was just about keeping the aggregate hauling company afloat, but then I started getting a little creative."

Zahlene started buying the bigger rocks and pieces of concrete from beach excavations — material that typically would have been discarded — crushing and screening it and then reselling that material to other contractors. That led to his first excavator purchase.

One of the big challenges Zahlene faced at this time was his age. Many of the people he was doing business with were twice as old as he was and had children his age.

"It can be tough when you're signing a contract with someone who you feel could be your son," he said. "It boiled down to just sticking to my word. If I said I was going to do something, I was going to do it."

Zahlene's mother, Beatriz, was influential in her support throughout this period. As the president of the company, she supported him and stepped in when her son had to focus on college.

"My mom is more than just my mom. She's my business partner. She's the backbone. Without her, none of this would have been possible," Zahlene said.

Aggregate recycling is a primary focus at ZEI. The company recently entered into a unique relationship with Titan Florida — a unit of Titan America LLC — to excavate and process a large volume of scrap and byproduct material at its Pennsuco Quarry near Miami.

"We're essentially recycling nonusable limestone material inside their quarry," Zahlene said. "In its current state, this material is unsuitable for further processing into finished aggregates or for direct sale to the market, so it has been dormant for many years. With our expertise in handling this type of material, we're able to purchase the material as is and then process it at our own cost into a product that's suitable for use on our large-site work projects.

"Our relationship creates value for both Titan and ZEI, and it gives me an opportunity to compete on large-scale projects that I probably couldn't even bid on without Titan's support. Titan has been an excellent partner to work with. I've learned so much from them in the past year on so many issues, like safety and operations. They've given me a chance to grow and succeed, and the best way I can repay them is by striving to become their largest customer year after year." 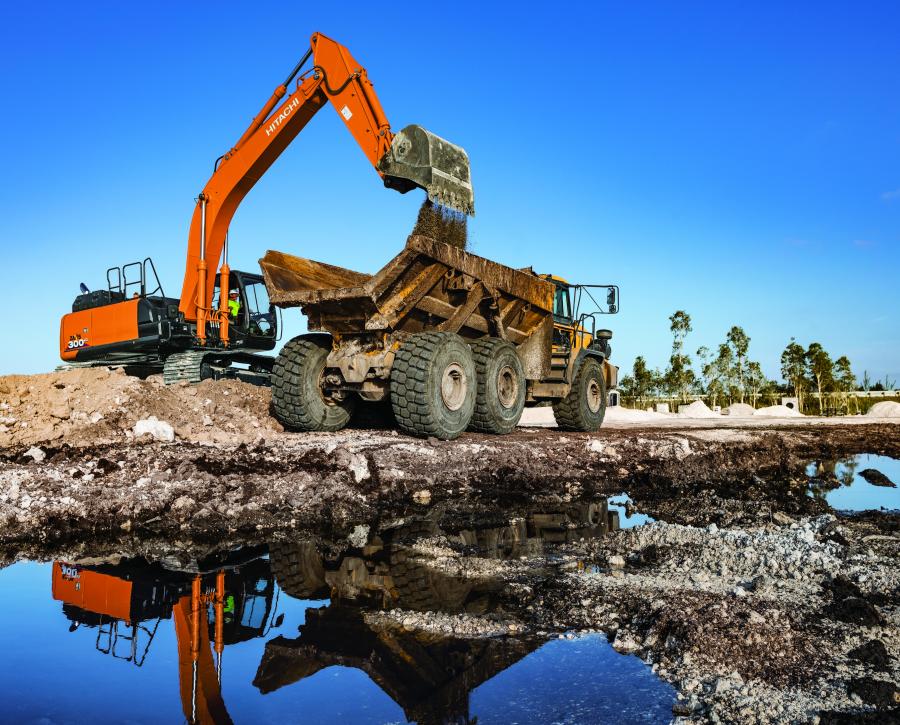 Working together with his Hitachi dealer, Dobbs Equipment, Zahlene purchased a new ZX470LC-6 to tackle the project.

"There was really no other option. The fuel economy in its class is amazing. It's the only machine that met the production levels at the budget that I had set for the project," Zahlene said.

Much of the material processed at the quarry is transported to a 15-acre site between the Miami Turnpike and I-75 that will serve as a park-and-ride lot for a megamall that is being built. The company has excavated roughly 175,000 cu. yds. of muck and is replacing it with more than 250,000 tons of processed material from the Titan quarry to backfill it.

A brand-new ZX300LC-6 is helping with that process.

When Zahlene thinks about his future, aggregate recycling will continue to play a big role. He plans to open the first soil remediation facility in southern Florida.

"That is where my true passion lies," he said. "There are only a finite amount of resources, so every load of material that I remediate and reuse is one load of virgin lime rock that can be used for cement or anything else."

Hitachi machines will continue to play a prominent role at ZEI.

"I've been able to prove myself because I have stuck to my word and have a strong vision for the future," Zahlene said. "Continuing to purchase Hitachi machines boils down to the same. You know you're buying five years of guaranteed work and performance, because it's not just the performance, it's also the reliability and dealer support that comes with it."