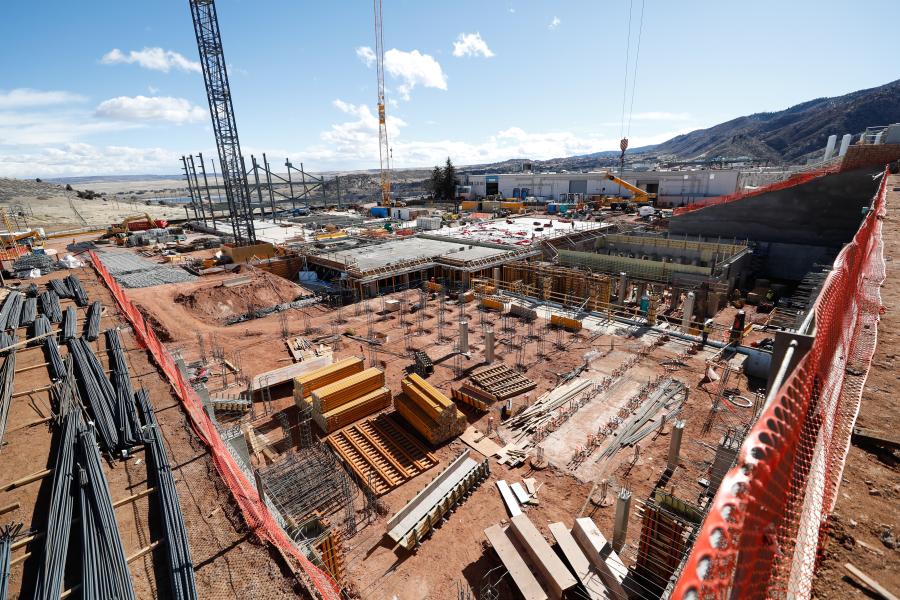 Highly-efficient satellite production is the focus of a $350 million 266,000-sq.-ft. Lockheed Martin facility under construction near Denver. (Lockheed Martin photo)

Highly-efficient satellite production is the focus of a $350 million 266,000-sq.-ft. Lockheed Martin facility under construction near Denver.

Known as the Gateway Center, it is being built on the company's Waterton Canyon campus.

Preliminary construction on the building started in early August 2017. The plant should be completed in 2020.

The facility is designed to build the next generation of satellites including satellites for defense. As the nation's top defense contractor, Lockheed Martin wants to speed up production of military satellites and in doing so, lower the cost of production.

In addition, the facility will include a high bay clean room capable of simultaneously building a spectrum of satellites in sizes from micro to macro.

The small satellite market is segmented based on type as nano satellite, micro satellite, and mini satellite. The term “microsatellite” or “microsat” is usually applied to the name of an artificial satellite with a wet mass between 10 and 100 kg or between 22 and 220 lbs.

National security, scientific and commercial satellites will be assembled and tested in the facility. Sheer size and versatility of the building will make it possible to produce as many as seven micro and macro satellites in one building. That will help to save time and reduce costs.

In addition, Lockheed Martin will be able to produce five of its flagship A2100 satellites simultaneously in the new facility.

Because assembly and testing will be performed under the same roof, workers will roll a satellite down the hall rather than moving it between buildings for testing. By reducing the amount of time it originally took to pack, move and unpack a satellite, the company expects to reduce testing time from about two days to less than an hour.

A Factory of the Future

“This is our factory of the future: agile, efficient and packed with innovations. We'll be able to build satellites that communicate with front-line troops, explore other planets, and support unique missions,” said Rick Ambrose, executive vice president of Lockheed Martin Space Systems. “You could fit the space shuttle in the high bay with room to spare. That kind of size and versatility means we'll be able to maximize economies of scale, and with all of our test chambers under one roof, we can streamline and speed production.” 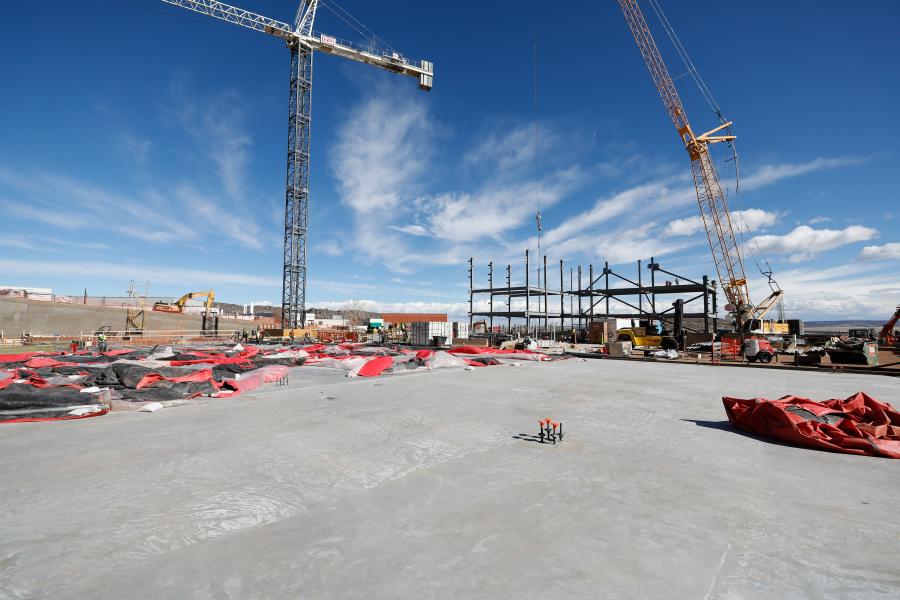 Lockheed Martin expects the construction effort to employ a total of 1,500 contractors during the three-year construction phase. The company has added more than 750 jobs to its Colorado workforce since 2014, and currently has about 350 job openings in the Denver area alone. The new building will accommodate that recent growth and new future projects.

Lockheed reports that state and local officials in Colorado have helped strengthen the aerospace industry and foster an environment that helps aerospace companies thrive and grow.

“Aerospace is an engine of innovation and growth for America, and we're investing in infrastructure and technology to help strengthen the nation's leadership in military and commercial space and scientific exploration,” added Ambrose. “We're transforming every aspect of our operations to help our customers stay ahead of a rapidly-changing landscape. The Gateway Center, coupled with advancements in 3D printing, virtual reality design and smart payloads, will deliver game-changing innovations while saving our customers time and money.”

Lockheed Martin's Waterton Canyon campus has been a hub of space innovation since the 1950s, with more than 4,000 employees and a wide range of industry-leading design, manufacturing and test facilities on site. Spacecraft currently in production at the site include the Air Force's GPS III satellites, NASA's InSight Mars lander, NOAA's GOES-R Series weather satellites, and commercial communications satellites.

Hensel Phelps takes pride in constructing modern energy-efficient buildings that are environmentally friendly. The company believes that it has a corporate responsibility to minimize its carbon footprint and impact on the environment. Since 1990, it has maintained a recycling program at all locations and provides waste material sorting areas on projects.

Many of the workspaces where its employees conduct business are platinum- gold- or silver-certified by U.S. Green Building Council. Hensel Phelps provides hybrid passenger vehicles to the company fleet. It also has charging stations at various company offices and locations.

The company's energy-efficient beliefs go into the design and construction of new buildings. 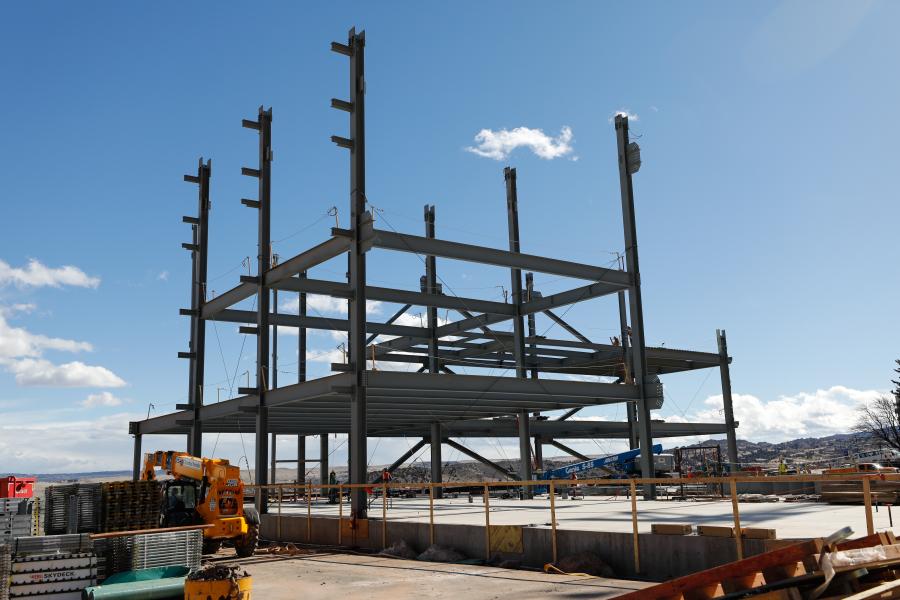 The foundation for Lockheed Martin's satellite production “factory of the future” has been completed. Company officials report the Gateway Center construction is making rapid progress and is on track for its completion in 2020.

The project recently reached a significant milestone when the construction team began installing vertical structural steel. Girders are now going up now on the facility.

Matt Kramer, Lockheed Martin director of external communications reports that 16,000 cu. yds. of concrete in total will be placed over the duration of the project. That equates to 2,000 concrete trucks parked from end to end extending more than a mile long.

Half of the concrete has already been placed in the foundations.

Kramer said 3,500 tons of structural steel will be used in the construction of the building.

“The Statue of Liberty weighs 225 tons. That means that structural steel used in the Gateway Center building would equate to 15.5 Lady Liberties,” he said.

The facility will house an ISO Class 8 high bay cleanroom, an anechoic chamber, and a large thermal vacuum chamber to conduct dynamic endurance tests on the satellites.

“The transformation of this site in just a few short months has been remarkable,” said Bill Breeden, vice president of Assembly, Test, Launch and Operations at Lockheed Martin Space in a release.

“The basement level has been excavated, the concrete foundation is laid, and we're already raising the steel beams that make up the backbone of the structure. We're well on our way to a 2020 grand opening, when this new facility will be primed and ready to manufacture a wide range of state-of-the-art satellites with agility, precision and efficiency.” 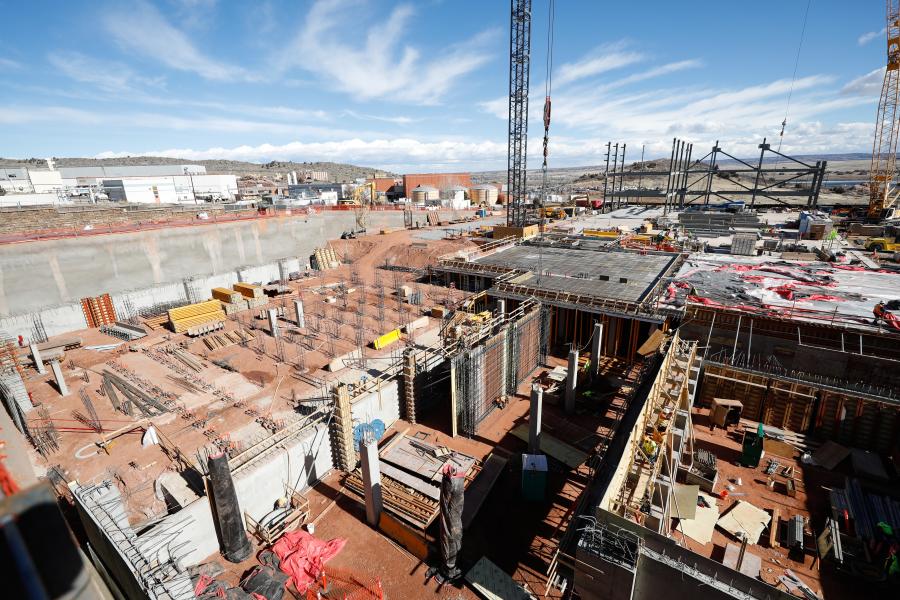 In the months since the groundbreaking, more than 100,000 cu. yds. of soil have been moved to make way for the project. That is enough dirt to cover a football field to a depth of 60 ft. To prepare for the foundation construction, more than 500 caissons and support beams have been drilled and installed in holes up to 30 ft. deep.

Upon completion, the Gateway Center project will have used hundreds of structural steel beams weighing nearly 2,200 tons each.