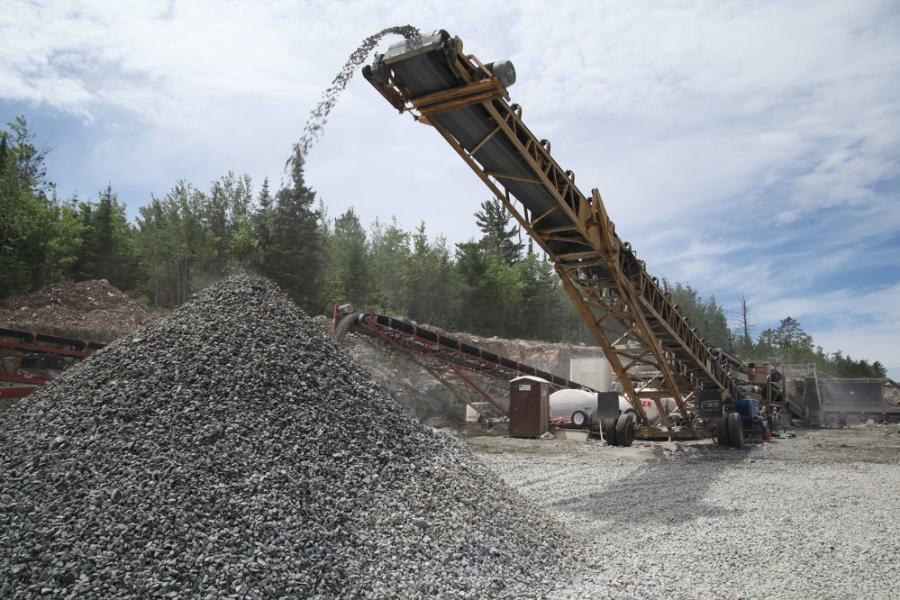 Newly cut aggregate going back into the project spews out from the belt leading out from the rock crusher in the background.

Perseverance and patience paid off for a grass roots effort to bring a new and safer alignment to a busy, far northern Minnesota highway filled with a higher percentage of crashes than other, similar roads in the state highway system.

After 18 years, when a group of dedicated residents and business owners first raised their safety concerns to Minnesota Department of Transportation (MnDOT) officials, they are seeing the results of their efforts.

This coming July, a new and much straighter highway along a 5.7 mi. stretch of TH 169 between the small tourist destinations of Tower and Ely, Minn., is scheduled to be completed.

Dubbed the eagles nest project by MnDOT, Hoffman Construction based in Black River Falls, Wis., took on the $16 million contract.

The company is a 100 year old contractor in its fifth generation of family ownership. It manages 30 to 50 highway and site development projects each year and owns a variety of dozers, scrapers, off-road trucks, backhoes and dump trucks.

With this project, MnDOT in conjunction with the Associated General Contractors of Minnesota, recognized Hoffman Construction with the “Best in Class for Outstanding Performance in Grading” award.

The old, narrow highway snaking through a series of lakes and filled with twists, dips, steep hillsides and shaded sections that caused dangerous ice conditions in the winter, will be replaced with 12 ft. lanes, 8 ft. shoulders and a straighter and flatter alignment.

The existing highway “had a lot of curves, narrow shoulders, deep, roadside drop offs in many places, a lot of trees and vegetation close to the road. All of that combined resulted in higher than average crash rates for this type of highway,” said Beth Petrowske, MnDOT public information officer.

One of the most pressing safety problems centered on lane departure crashes including head on collisions, vehicles running off the road and sideswipe collisions which represented 84 percent of the crashes. Statewide, the percentage is 33 percent for this category of crashes, according to MnDOT documents.

The rugged geographic and geological conditions challenged designers and Hoffman crews and its team of sub-contractors for every dip, twist and steep hillside they eliminated.

It's an area filled with lakes, lake shore properties and lake resorts. It is a heavily used commuter route. During the summer vacation season, traffic volume increases. All this combined generated a lot of interest and strong focus from all parties driving the highway to bring a safer road to this section of TH 169.

The road in this part of northern Minnesota runs through iron mining country covered by forest above ground and hard rock below the surface. The highway ends at Ely, Minn., and is the stepping off point to the Boundary Waters Canoe Area (BWCA) for thousands of canoeists camping in the park each summer.

The residents and business owners that eventually brought this project to design and construction, formed the TH 169 Task Force in 1999. They met with former U.S. House Rep. Jim Oberstar representing northeastern Minnesota. With his help, funding was set aside for the project in 2005, said Petrowske.

Though the funding was in place, it was just the beginning of an uphill itinerary of plan development, public meetings and environmental studies.

In what can be best described as a “leave no stone unturned” analysis and review, MnDOT teamed up with an enthusiastic public participation to sift through the many concerns, possible environmental, economic and traffic impacts.

Finally, in 2015, after funding for the project was set aside 10 years earlier, MnDOT and the TH 169 Task Force agreed on a final plan.

Specifically, the 3.5 mi. segment on the east end follows the existing alignment and was rebuilt and completed late last fall under traffic conditions.

The section of highway along the western 2 mi. of the project runs south of the existing alignment through acres of virgin land. It was here that crews eliminated many of the short sightlines caused by the hills and curves to make the new highway straighter and flatter.

Since construction started late last winter, “the Eagles Nest project has progressed nicely from the start,” said Dan Squires, P.E., MnDOT project engineer. “Hoffman Construction staff were able to continually adjust their schedule for the work that needed to be completed.

“They hit the project with enough equipment and forces to complete the work last year on schedule and with no penalties. The working relationship between MnDOT and Hoffman was one of, if not the best, I have known in my 31 years.

Beyond the detailed and lengthy planning that went into moving this project to construction, it was a project of firsts and new challenges for MnDOT and Hoffman crews.

“The foremost challenge was the presence of known sulfide bearing rock and a first for MnDOT and Hoffman Construction and the road construction industry in Minnesota,” said Squires. “Special testing requirements, rock separation, addition of lime products to neutralize the sulfide bearing rock, geomembranes and geotextiles were all rolled into the rock excavation and placement requirements of this project.

The storm water treatment areas built for this project were also a first for MnDOT.

“Due to the large amount of rock and wetlands located along this project, storm water treatment options were limited and required thinking 'outside the box.' The solution was to construct a series of benches along the slopes in all of our large embankment areas to capture the runoff as it rolled off the pavement and down the slope,” Squires said.

As they faced these first time construction challenges, “Hoffman crews were very willing to work with the agency to come up with construction methods and equipment choices to complete these tasks,” Squires added.

The short work season last year combined with an accelerated schedule left no room for lengthy adjustments or delays. And, the narrow staging and grading areas through the rebuild section of the highway added to the new challenges, said Tom Dobberthein, Hoffman construction superintendent. 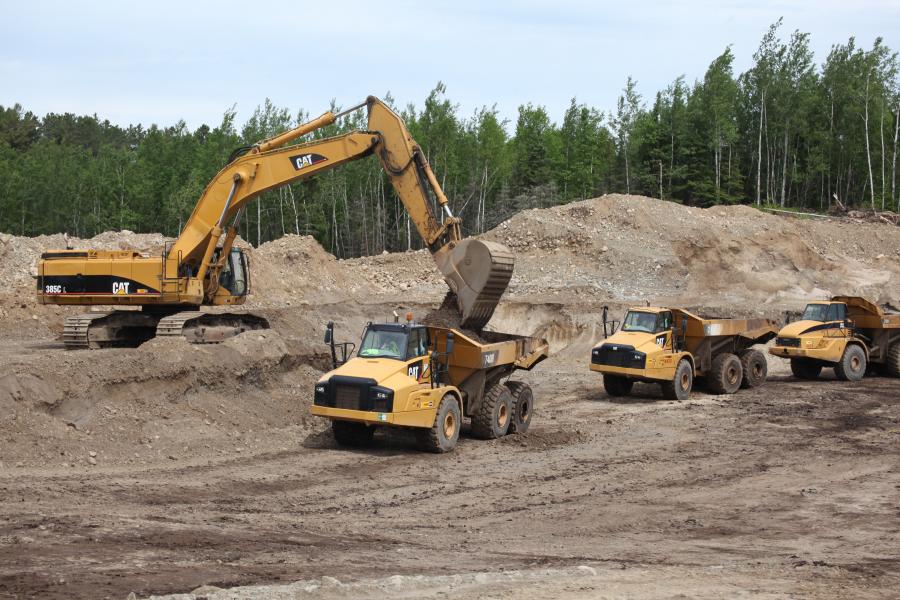 It was a project Dobberthein classified as a “borrow” job because 1 million cu. yds. of fill was required to fill in the low areas. He said about half of that fill was dug from the construction site while the other half was trucked in from nearby private properties.

Primary subcontractors on site included Intex Corporation, based out of Albertville, Minn., for crushing operations; Nar Landscaping, based out of Kelliher, Minn.; Hardrives Incorporated for paving and SX Blasting, Menomonie, Wis., to loosen and remove rock.

Work through the existing alignment was split into six stages to keep traffic flowing during construction.

Through the first three stages, crews placed asphalt to temporarily widen the existing road to keep two lanes of traffic flowing while the first of the new traffic lanes was built. Cross drain pipes were installed during these stages.

During the fourth and fifth stages, crews switched traffic to the newly constructed highway lane and built the other half. Crews opened the new highway to traffic and removed the temporary asphalt to complete stage six.

Utility relocations did not pose a problem. Except for a few minor power pole adjustments, utility crews relocated most of their underground lines before paving removals and construction began. Only one utility was on site to bury 3,000 ft. of fiber optic cable during construction.

Along the stretch of construction running through virgin land, the underground rock presented the biggest obstacle for road crews. Two thirds of the blasting occurred in this area and involved the largest rock cuts.

Over most of the construction season last year, SX blasting crews set charges and shattered approximately 180,000 cu. yds. of rock through the length of the project. Of this amount, an estimated 65,000 cu. yds. of rock was considered to be “possibly acid generating” (PAG) rock.

To fulfill the requirements of the sulfide mitigation plan, crews treated the PAG rock with a combination of limestone and ag-lime before dumping it as fill material into two designated depositories on the project, Dobberthein said.

This work was a project on its own.

The fills were constructed with geomembrane liners, geogrid and geotextile fabric. Crews mixed the PAG rock with limestone and ag-lime during placement to prevent the oxidation of iron sulfide resulting in the possibility of acid leaching into the ground.

“The construction of the PAG fill depositories were new to the industry and unique to build utilizing the geomembrane, geogrid and geotextile shingle layers and top cover,” Dobberthein said. “Hoffman and MnDOT staff worked together to create three methods for mixing the limestone and ag-lime into the PAG rock during fill placement based on the dosing rate calculated from the test samples taken at the time of drilling the rock.

“The highest dosing rate required adding limestone and ag-lime to every load before dumping on the fill area,” Dobberthein said. “This allowed the fill dozer to mix the material well during the compacting and placing effort. The two lower dosing rates were accomplished by placing the limestone and ag-lime on the rock fill to blend into the rock fill.”

To ensure these areas remain free of contamination, environmental crews will monitor the ground water in the area for five years following the end of construction to verify the mitigation plan is succeeding.

Blasting operations throughout the construction zone took out anywhere from 500 cu. yds. of rock on the smallest cut to 80,000 cu. yds. at the biggest cut.

SX crews brought in four Terex 345 Reedrill rigs to blast multiple locations to maintain the tight work schedule. They drilled down to the new roadway depth with drill patterns ranging from 6 ft. by 6 ft. to 12 ft. by 12 ft. depending on the depth of the rock.

“We had no complaints, no issues with the blasting. SX blasting crews kept everything under the vibration limits, no wells were damaged,” said Dobberthein. “They performed pre-blasting and post blasting surveys which showed there was no effect from the blasting work.” 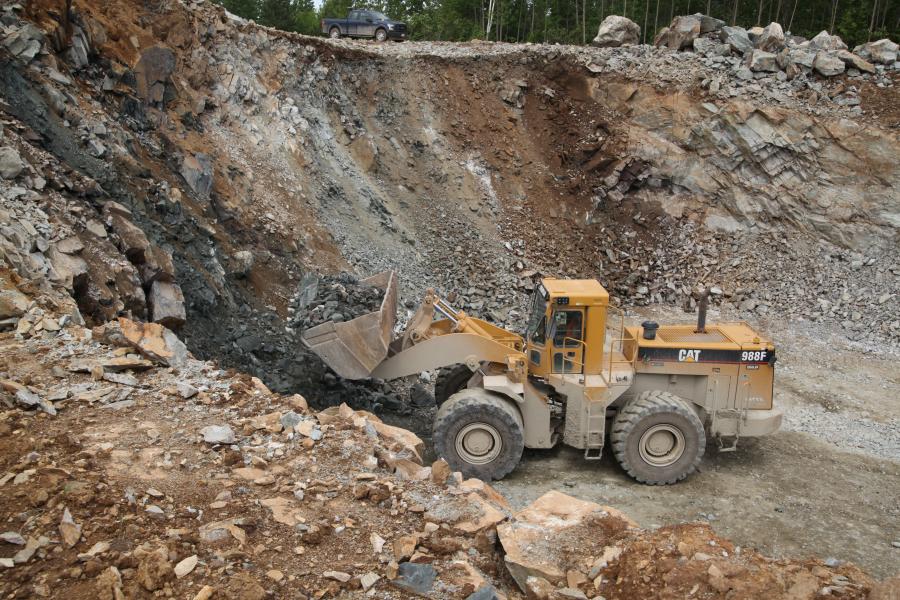 At the location of the largest rock cut, crews blasted down as far as 38 ft. deep and 96 ft. wide, which left very little spare space to maneuver the large Cat loader and crushing spread while maintaining a haul route past the crushing operation, Dobberthein said.

Crews crushed approximately 100,000 tons of rock on site to recycle back as aggregate base for the new road.

As work ramps up this spring to complete the grading and paving push through the new alignment, MnDOT public information officer Beth Petrowske expressed her appreciation to all the parties involved in the lengthy and detailed design process and review.

“It was 12 years after funding was set aside for the project before we were able to start construction.

“It's really important to us [MnDOT] that we had interested people working with us on the project. It was an amazing group, they put in a lot of hours of their own time because they were so committed to see this project happen. We were really amazed by this group,” Petrowske said.