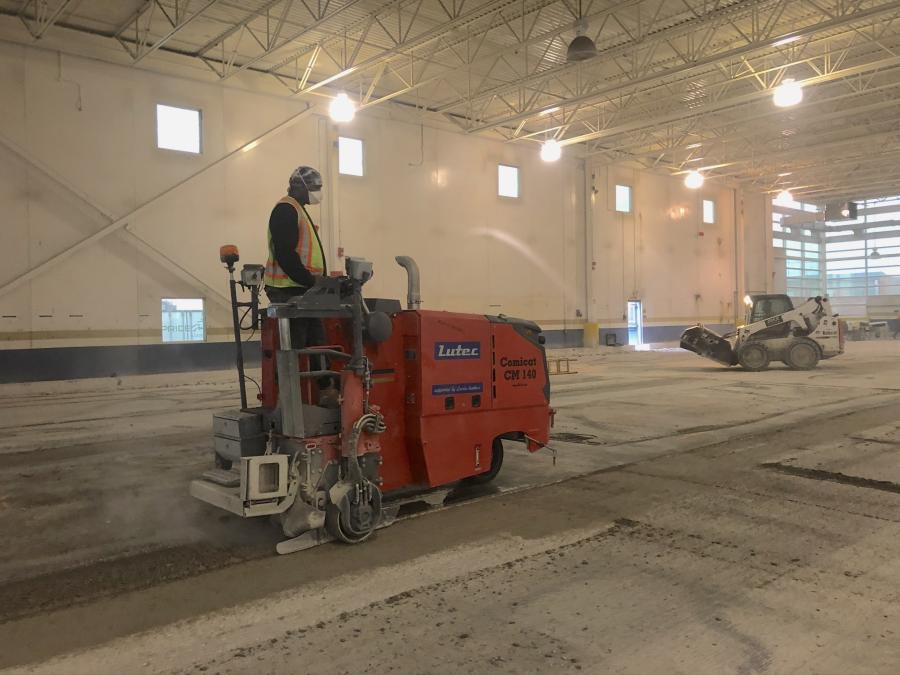 Using the Lutec Comicat CM 140 instead of using jackhammers decreased the number of people on site from more than 10 to just two.

Molson Coors needed to repurpose the concrete floor at its Toronto brewing facility. Besides the floor being 20 years old, the company wanted to convert the property from a production facility complete with bottle washer, filler and pasteurizer that drain onto sloped floors into a warehouse.

Approximately 35,000 sq. ft. of concrete flooring needed to be removed from the 60,000-sq.-ft. facility and the sloped floors needed to be milled to prepare for new concrete to be placed back at a level grade.

Site Manager Wayne Nyhuis considered redoing the floor in the same manner when he replaced a similar floor 15 years ago. At the time, they used a grinder.

"It was messy," said Nyhuis.

Ott informed Thompson of the benefits of using a Lutec Comicat CM 140 milling machine, including its ability to cleanly, cost-effectively and quickly mill concrete to specification.

"The Comicat 140 is an efficient and productive machine for grinding concrete, asphalt and terrazzo," said Ott. "The German-engineered machine provides the best possible solution to get the surface prepared correctly for final overlayment and is used regularly to prepare floors in retail centers, industrial buildings, hospitals and parking garages, as well as prepare bridge, concrete road and asphalt road surfaces for resurfacing. Also, the machine is equipped with a dust-suppressant system that includes a Hepa filter, the machine is ideal for work indoors."

Then, Nyhuis contacted Thompson about removing the concrete floor from the Molson Coors facility. Thompson told Nyhuis that he would like to use the Lutec Comicat CM 140. Intrigued, Nyhuis scheduled follow-up conversations with Ott before allowing Ross and Anglin to use the Comicat CM 140 to mill the 35,000 sq. ft. of flooring and Ross and Anglin subcontracted Lutec North America to perform the work.

Lutec North America is not only responsible for all North American sales of the Lutec Comicat CM140, the company also provides concrete milling services within Southern Ontario.

Due to its compact size, the Comicat CM 140 could move unhindered around the facility. Its use also allowed normal operations to proceed at most of the site.

Nyhuis also had one time used a milling attachment on a skid steer loader. He said it didn't work as well as the Comicat CM 140. It was less efficient and accurate. It also created a lot more dust.

Besides its size, the machine's cleanliness makes it well-suited for working indoors. The machine produces so little diesel emissions and dust that it's considered safe for indoor operation even when other people are on site.

"When our floors were milled with the Comicat CM 140, there was minimal dust and only a little mist. The machine comes with a vacuum, and we used it at first, but eventually decided to stop using it. The machine produced so little dust that using the vacuum made only a small difference."

The milled surface also was safe for pedestrian use so people could walk across the floor before the new floor was laid. 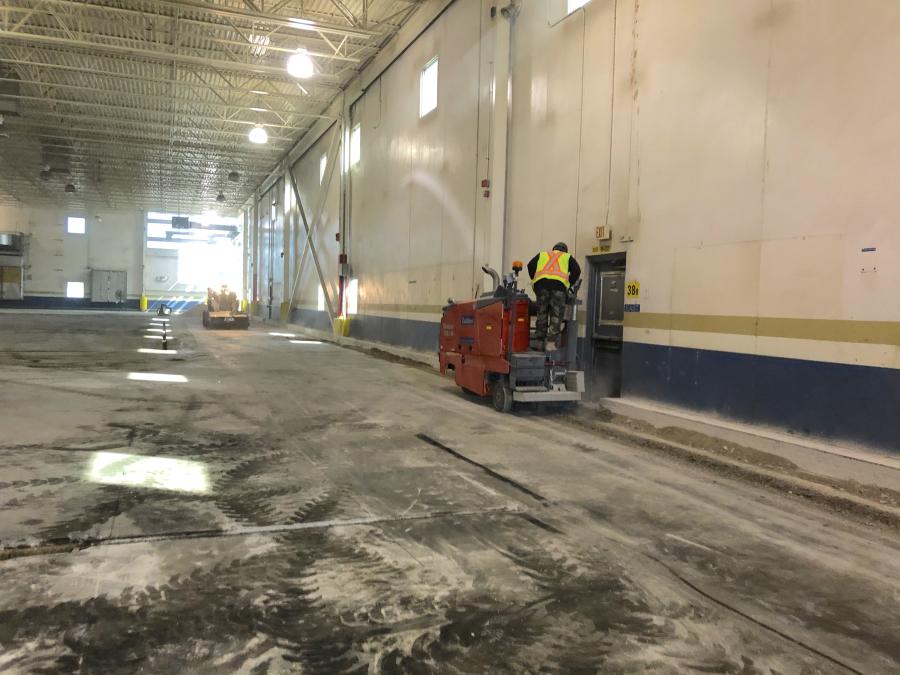 The use of the Lutec Comicat CM 140 proved to be the right tool now when Molson Coors needed to replace a floor at the its Toronto facility.

The use of the Comicat CM 140 can significantly decrease the number of people on the job site, which aids in decreasing risk of COVID-19 transmission.

The Comicat CM 140 removes up to 3 in. of concrete, asphalt or terrazzo by milling it with 31 rotating teeth, leaving a path of debris in its wake. A skid steer loader follows the Comicat CM 140 to clean the debris. So, only two people — one in each machine — need to be present. Little manual work is necessary.

On the other hand, in order to remove the 35,000 sq. ft. of flooring at the Molson Coors facility, it would take 10 people with jackhammers to accomplish the same task in the same amount of time.

During the project, Nyhuis decided the facility would benefit if another section of the floor (approximately 10,000 sq. ft.) were milled. Lutec North America completed the additional milling by the deadline quoted for the original 35,000 sq. ft..

"I was really impressed with how quickly Lutec was able to mill the floors using the Comicat CM 140," said Nyhuis. "We even lost a day of work due to a COVID-related shutdown."

But, the Comicat CM 140 doesn't just do the same job as other methods, but faster — it does them better, according to the manufacturer.

Milling slopes to a consistent grade is a difficult task regardless of the method. The Molson Coors project required milling slopes up to 3 in. in height. However, the Comicat CM 140 was able to mill the slopes to the point they were consistent with the rest of the floor.

"I was both surprised and impressed with the machine's ability to mill slopes so well and so easily," said Nyhuis.

And, since the Comicat CM 140 can accurately mill down concrete to one-eighth of an inch, it doesn't remove more concrete than is necessary, which often happens with other methods. According to Nyhuis, this saved the company a lot of money when it came to pouring new concrete.

"It has been months since we laid the new floor and there still isn't a single crack in it," said Nyhuis. "Engineers predicted that it would have cracked by now. I attribute the absence of cracks to the excellent bonding qualities of the milled surface." 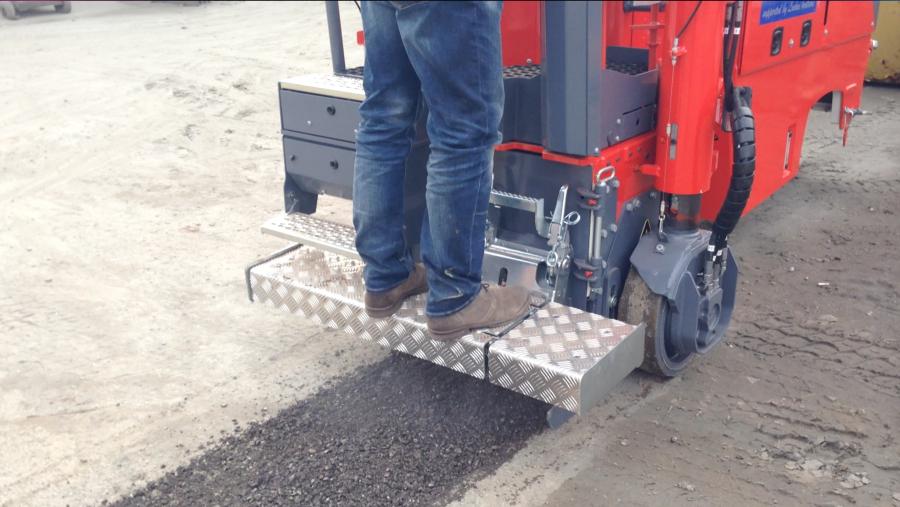