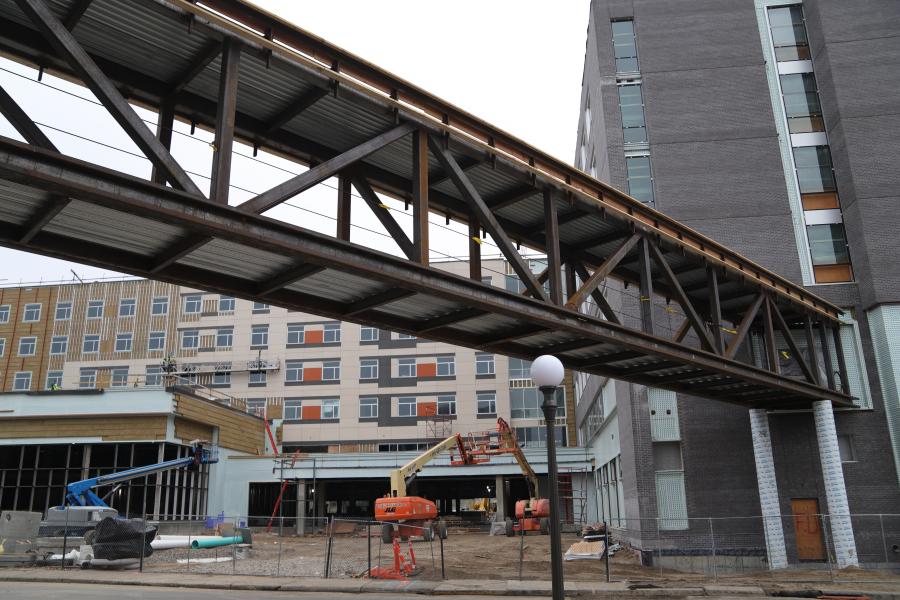 The largest public-private partnership in social services and housing in Minnesota history is on target for an October 2019 completion as Phase 2 of Dorothy Day Place, a new emergency shelter, housing and social service campus in downtown St. Paul, enters its final months of construction.

Dubbed the St. Paul Opportunity Center and Dorothy Day Residence, Phase 2 of the campus consists of a six-story, 165,000-sq.-ft., $54 million, post-tensioned, cast-in-place concrete structure that is now nearly enclosed. Inside, in the areas that are fully enclosed, tradesmen are installing the electrical, plumbing, mechanical and finishing details.

The structure is located across the street from Phase 1 of Dorothy Day Place, the $40 million Higher Ground St. Paul, which opened in January 2017. Managed by Catholic Charities of St. Paul and Minneapolis, the two buildings will replace the original Dorothy Day Center shelter that opened in 1981 and occupied the same city block where the St. Paul Opportunity Center and Dorothy Day Residence are now under construction.

Watson-Forsberg, a 54-year-old company headquartered in Minneapolis, was awarded the contracts for construction of both buildings. Other major contributors to the project are the designer, Cermak Rhoades Architects, based in St. Paul; Bolander and Sons, a demolition and excavation contractor based in St. Paul; Gresser Concrete and Masonry, out of Shakopee, Minn.; and Northern Air Corporation (NAC) Plumbing and HVAC of St. Paul.

The two-building campus is notable for dramatically increasing the space of the homeless shelter from 26,200 sq. ft. to 282,000. sq. ft. Overnight emergency shelter capacity also will increase from 250 to nearly 700, with a combination of shelter and housing options. The shelter areas will feature individual bunk beds, while the housing will be made up of efficiencies, with and without kitchens. 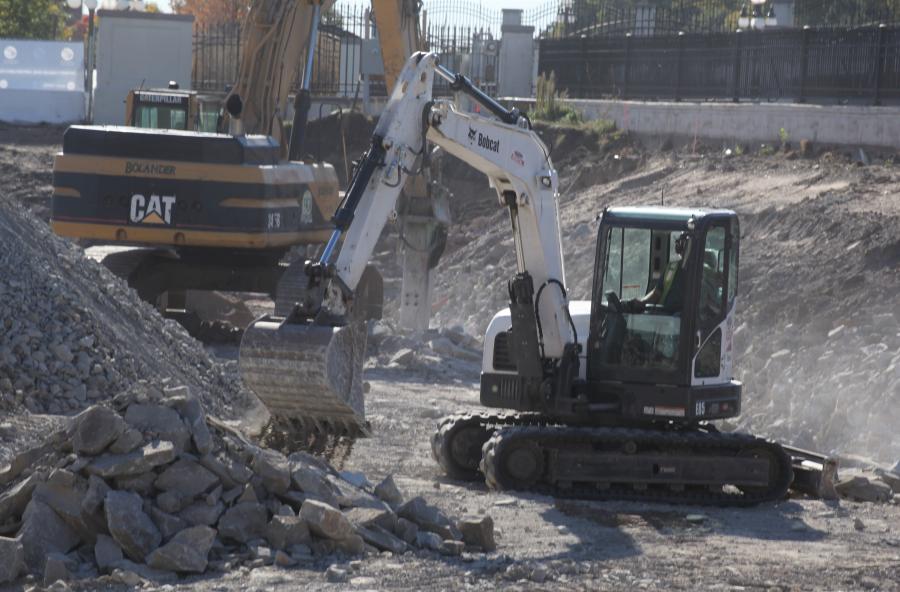 When crews completed the five-story, 112,750-sq.-ft. Higher Ground St. Paul, it offered housing to nearly 500 of the city's homeless population through a combination of an emergency overnight shelter on the first floor, pay-for-stay shelter units on the second floor and permanent housing on the upper levels.

The St. Paul Opportunity Center and Dorothy Day Residence will complement this range of housing services by offering an additional 177 permanent housing units and social services from job training and meals to clinics and veterans' resources.

Architecturally, the buildings feature sustainable materials, and the facades of both are covered with windows utilizing bird glass to bring in more natural light. Higher Ground St. Paul also features a green roof and an expansive courtyard with a heated snow-melt system.

Recently, crews lifted into place a 212-ft. steel skyway to connect the two buildings at the second-floor level.

Dorothy Day Place is located across the street from the Xcel Energy Center, home to the NHL Minnesota Wild and a big concert venue on the outer ring of downtown St. Paul. The location is easily accessible by bus service and the nearby light-rail train connecting the downtowns of St. Paul and Minneapolis. These are critical links for the many Dorothy Day residents and guests who rely on public transportation. 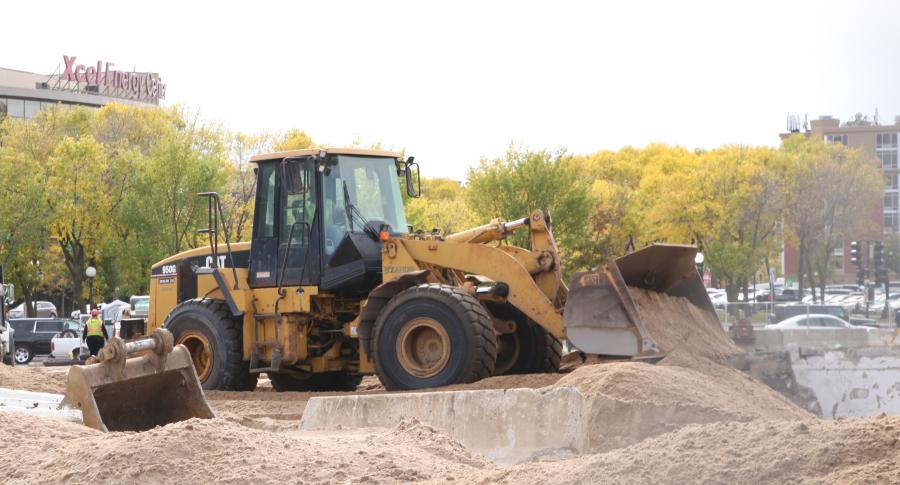 When the original, red brick, two-story shelter opened in 1981, it was designed as a daytime food service center for the city's homeless population, serving meals to 30 to 50 people each day.

It became a last-minute overnight shelter in the early 1990s when staff responded to the need for emergency housing for the city's growing homeless population. Tables were cleared after the evening meal and thin mats placed just inches apart on the floor to accommodate 250 people overnight. By 2011, the demand was so overwhelming staff was forced to turn people away.

This marked a breaking point that launched a community response.

In 2012, St. Paul Mayor Chris Coleman convened a task force of community leaders who, one year later, issued a recommendation for an innovative new vision to prevent and end homelessness.

"Dorothy Day Place is a symbol what can be accomplished when a group of committed people, from both public and private sectors, come together around a shared vision of hope and opportunity," remarked Tim Marx, president and CEO of Catholic Charities. "The construction teams played a key part in the overall effort. They have been committed from day one to building a safe, healing and beautiful space where our neighbors in need have a chance to reach their full potential. Together, we are building a community where everyone can thrive."

Construction on the St. Paul Opportunity Center and Dorothy Day Residence began in September 2017. During construction, there was a peak workforce of 100 crew members on site.

Equipment mobilized for the project included Cat and Komatsu excavators and dozers, Genie and JLG lifts, a Liebherr 316 tower crane, an Alimak Scando 650 hoist and a parade of side dumps and dump trucks moving in and out of the site.

When crews from Watson-Forsberg and Bolander hit the site, the local electric utility had already removed and rerouted the underground electrical infrastructure.

"We had three buildings on site that we had to take down, so we had disconnects of the huge electrical underground infrastructure throughout the whole project," said Todd Osowski, Watson-Forsberg construction superintendent. "That was probably the biggest hang-up to us getting here to demo the buildings and stay on schedule was moving all that high-end power out of the way." 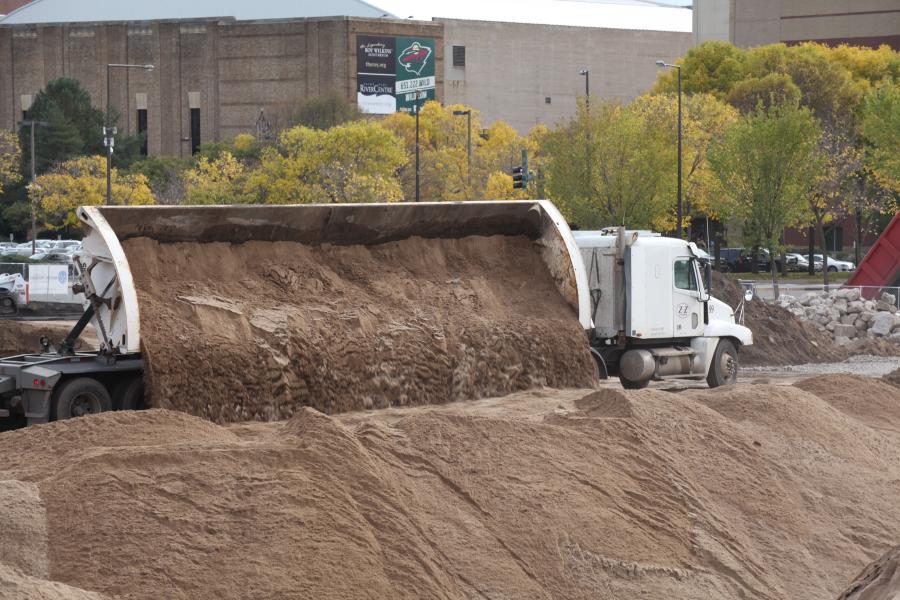 By the middle of October 2017, the original buildings were long gone, excavation was progressing and clean fill was being trucked in. The excavation of the site did become a bit more challenging because of the underground geology of downtown St. Paul, which is notoriously known for its layers of hard rock.

Prior to mobilizing, soil borings were done so "we knew exactly what we were getting into," said Osowski.

Though urban fill made up most of the excavation material, excavator operators hit a layer of hard rock that was not expected.

"We constructed the first building across the street," Osowski explained. "That band of rock across the street changed when we entered the property here, and it was a lot harder than we anticipated. We had no piles to install for the footing work, but to not undermine the streets, we had to line-bore across the corner of Old Sixth Street and Dorothy Day Place to prevent the rock from fracturing."

Even though operators spent more time at the controls of excavators hammering out the rock, it did not eat into the schedule to any significant degree.

"There were some thick footing pads that we had to pour a little deeper and in some of those areas we re-engineered some footings because we knew we were on solid bedrock so we did not have to dig as deep on some of those pads. Knowing that the rock was stable, we actually decreased the thickness of some of the footing pads," Osowski said.

"Once we got out of the rock and on level ground, Gresser crews came in and formed and poured concrete through last year's winter season. Nothing really held us up once we got to this point. We stayed pretty much on schedule. We did battle some cold days but with the winter conditions, we had heat and cover on a good portion of the building."

In mid-April, just as temperatures were rising and snow was melting, Mother Nature swung 180 degrees back to winter with a storm that dumped 14 in. of snow and brought unusual white-out conditions to the inner city.

Then, Mother Nature abruptly turned again, bringing highs near 70 degrees by the end of the week and clearing up the snow as quickly as it had fallen. 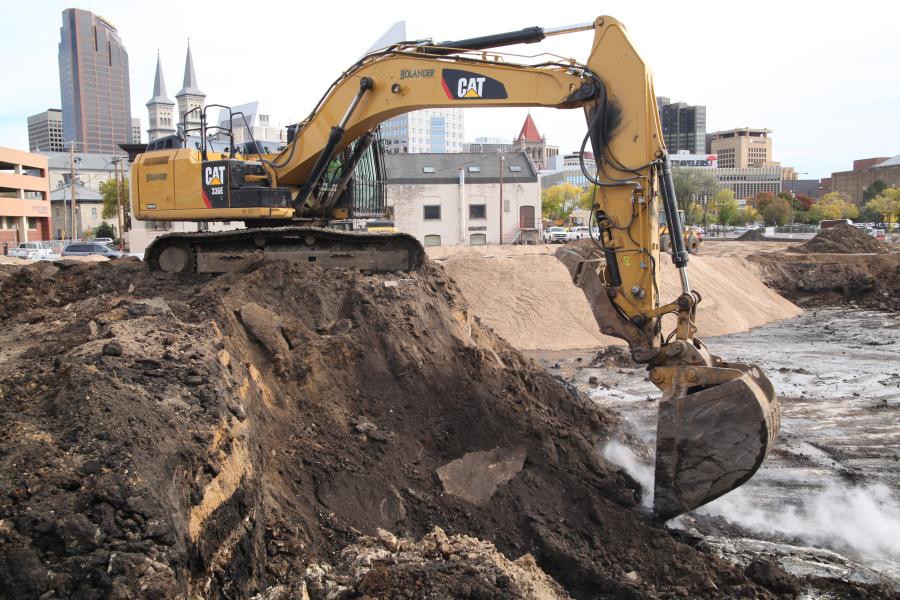 "We had rain, but for the most part, we were forming and pouring the decks and staying on schedule as far as the timing on the decks," Osowski said. "We may have been off a week or two, but we were otherwise holding tight to the schedule. Until you get a roof on, you're under the mercy of Mother Nature. Overall, though, we're in pretty good shape with where we're at on the inside of the building."

3D technology has been an important factor in the design of the interior mechanical, electrical, plumbing and communications conduit as a team from NAC mapped out the locations of all the interior utilities.

"Clash modeling" allows a 3D visual analysis of the placement of interior utilities during a structure's design phase, which catches any conflict or overlap in the thousands of feet of wiring, vents, pipe or other conduit installed inside the walls or under the deck in advance of installation.

It is a piece of technology that Osowski enthusiastically supports.

"This advanced the rough-in portion of the building because all the tradesmen knew where their utilities were going. Usually, you're battling these conflicts in the field," he noted. "These are the kinds of issues that hold up a job and stall a schedule."

Conflicts are eliminated in advance of construction by design adjustments made on a computer instead of the much more labor-intensive hammering and drilling required to reroute utilities during construction.

The computer-aided design is combined with GPS technology to establish points on the inside of the building to guide tradesmen installing their separate utilities.

"That's the way things are going these days," Osowski said. "There are no strings or snapping of lines on the deck anymore. Everything is on a GPS unit on a pole and a little indicator on the deck to lock in a point. The design even goes to the point where the locations of all the threaded rods holding the utilities were established in advance. And the technology even tells the framers how to space their studs." 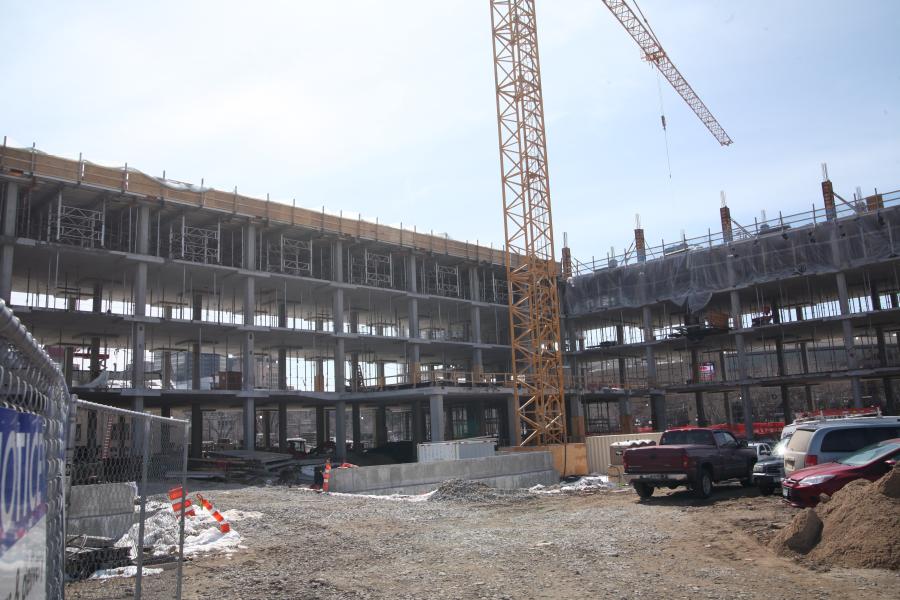 On the environmental side, Cermak Rhoades, the building architect, is following B3 sustainable energy and building material standards.

"All the iron that we bought for this job, the rebar, the steel, this all needs a certain percentage of recyclable material," Osowski said. "Part of it is the envelope of the building, the insulation and rain screen. Before, when we worked the outside walls, we typically see the insulation and vapor barrier. Here, it's all gyp board on steel studs, and it's all on the outside of the building."

To date, the fall and early winter in Minnesota have blessed Watson-Forsberg and its team of subcontractors with mild weather free of heavy snowfall, a far cry from last season.

Though the weather could suddenly nosedive into a cold and snowy pattern, construction is progressing quickly and the exterior and interior are well on their way to completion.