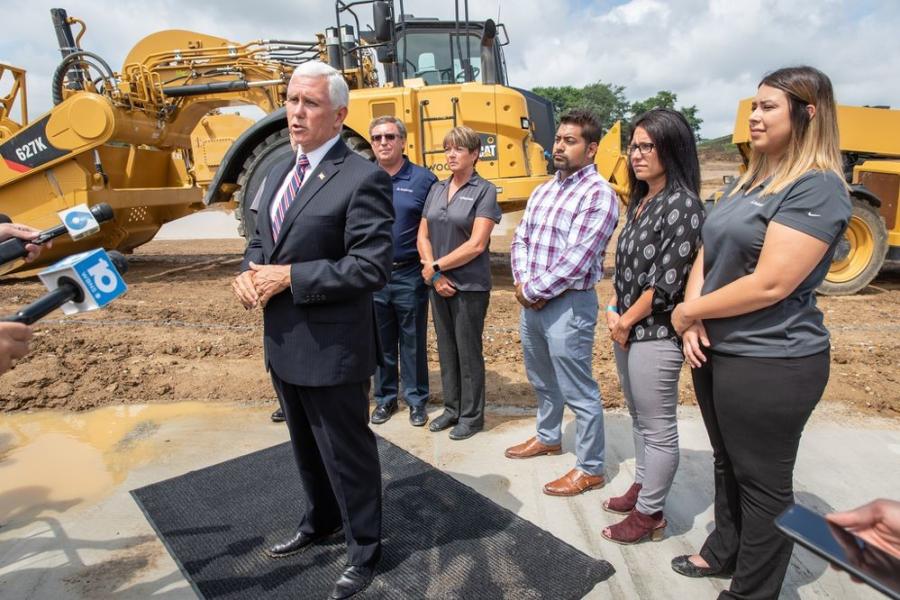 Vice President Mike Pence was among those attending the formal kickoff in July for construction of the $60 million facility. (Magna photo)

In Lancaster, Ohio, work has begun on Magna's first dedicated seat structure plant in the U.S. Vice President Mike Pence was among those attending the formal kickoff in July for construction of the $60 million facility, which will feature robotic laser and MIG welding capabilities.

"It was a great honor for us to welcome Vice President Pence, and have him join in the groundbreaking ceremony," said Phil Holjak, general manager of Magna Seating Columbus. "It was great to see so many project partners and stakeholders gathered together, as well as the special guests who joined us from across Ohio and Washington D.C., to celebrate one of our investments come to life."

Holjak said new business with a global automaker is the reason for building the 150,000-sq. ft. plant at this time.

"The facility will supply seat structures for various models with that automaker, beginning with a plug-in hybrid. In the future, we expect to grow our business with other automakers in the region, as well."

The plant is strategically located to provide world-class seating structures. The manufacturing facility is expected to begin operations in the first quarter of 2020, producing the metallic skeleton inside an automobile's seat.

"It's the foundation of the finished seat we see in our cars, before foam and trim and other features are added," said Holjak. "Magna is a leader in seat structures and mechanisms, including products such as Stow n Go seating in the Chrysler Pacifica, and EZ Entry second-row seats in GMC and other vehicles. Seats are designed to address the needs of today's SUV owner, with easier accessibility and greater space flexibility."

The site was selected based on its central location for supplying multiple automotive assembly locations, as well as its access to a potential employee base in the greater Columbus area and sub-supplier partner proximity. The property was relatively flat, with very few trees.

"It's a 24-acre site, which gives us room to expand another 50,000 square feet. The site has been prepped for this eventuality."

According to Holjak, the site was designed to balance.

"Material from the detention pond was used for building pad and site fill. Wet weather caused us to farm the site a bit, and there will be an under-drain system installed to intercept ground water from getting under the parking lot."

The contractor for the job is Meridian Design Build of Rosemont, Ill.

The project is approximately 60 percent complete.

A variety of equipment is being used on the project, with approximately 50,000 yds. of cut and fill to be moved. Currently, crews are working on roofing, curb and gutter, underground plumbing and electrical. As for the robotic laser and MIG welding capabilities, 3,000 amps of electricity at 480 volts is required to equip the plant, along with a cable tray for electrical distribution and dual 100 HP air compressors.

Holjak noted the economic impact of the new plant could be significant.

"Along with an initial investment of approximately $60 million, we plan to create about 300 new jobs at this facility by 2021. It's fair to say the investment and job creation are welcomed by the community."

The company currently maintains four manufacturing operations, and employs approximately 2,700 people in Ohio. The latest project in Lancaster will be Magna's fifth location in the state. Holjak said it's gratifying to see work under way.

"After the planning and site selection process, we're quite pleased for construction to progress, and see the plans taking shape. We are proud to establish this facility in the state of Ohio, and become part of the Lancaster and greater Columbus community." CEG