Once construction has been completed, the New York Wheel will be the world’s tallest observation wheel at 630 ft. 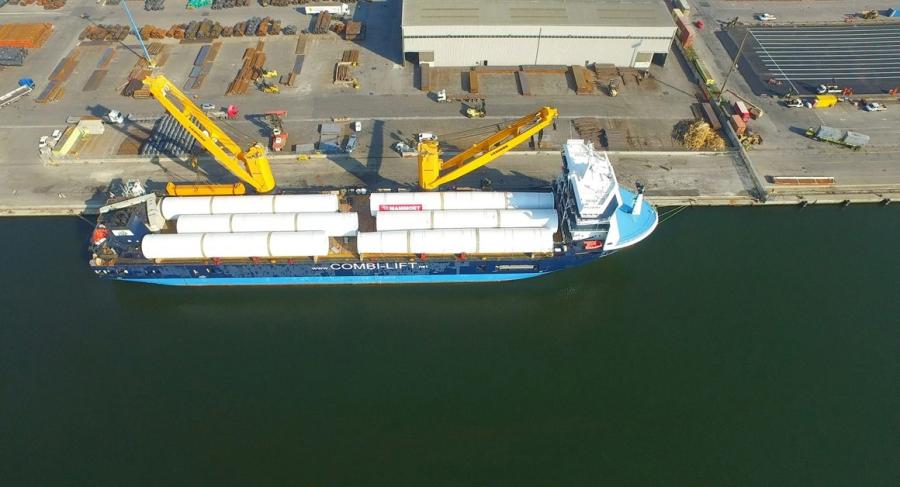 On Oct. 3, Mammoet concluded the transportation of the four legs of the New York Wheel. The legs were fabricated in Italy by manufacturer Walter Tosto and arrived safely at South Brooklyn Marine Terminal.

The New York Wheel, an initiative of the New York Wheel Company, is being constructed near the northern tip of Staten Island, about 115 ft. (35 m) from the shores of New York Harbor. Once construction has been completed, it will be the world's tallest observation wheel at 630 ft. (192 m).

The arrival of the legs — a milestone in the construction project — was marked with a celebration. They are the first New York wheel components to arrive that will be installed above ground. Included amongst the guests were Rich Marin, president of the New York Wheel Company; Maria Torres-Springer, president, NYC Economic Development Corp.; and several city council members.

The construction and transport of the wheel components was coordinated by Mammoet USA. Mammoet USA engineered the multiple erection procedures; procured all the necessary parts from all over the world; and will construct the entire wheel. The legs will be installed using Mammoet cranes and Mammoet self propelled modular transporters (SPMTs). In total the company will be erecting more than 11,000 tons (10,000 t) of steel.

Mammoet specializes in engineered heavy lifting and transport. The New York Wheel will be yet another example of Mammoet's work on iconic city structures across the globe. Previous projects include the erection of the London Eye (United Kingdom, 1999); placing Unilever's new headquarters on top of its existing factory in Rotterdam (The Netherlands, 2003); and construction of the Dubai metro system between 2006 and 2008.