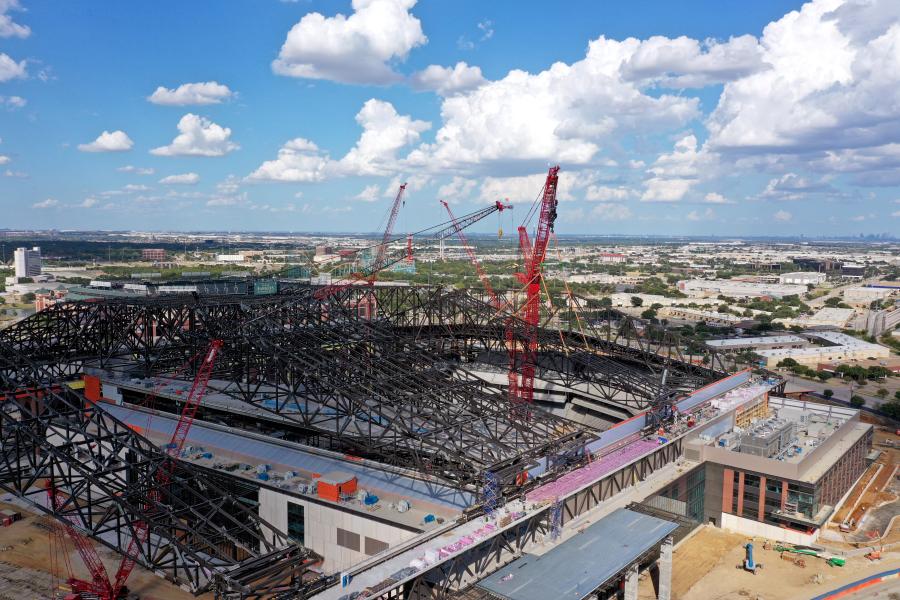 Manhattan Construction was honored with AGC’s Build America Award (New or Renovation $100 Million or More) for its work on Globe Life Field in Arlington, Texas.

The Manhattan Construction Company recently received a highly respected award for its work on a massive undertaking in Texas.

On Sept. 22, Bob Lanham, president of Associated General Contractors, handed out the Build America Award to Manhattan for the category of Construction Management New or Renovation $100 million or more, recognizing the construction company for its construction of Globe Life Field, home of Major League Baseball's Texas Rangers.

The distinction recognizes the current standard of excellence for time, cost, safety and quality, while accounting for environmental impact. Manhattan built the new 40,300-seat stadium in a little over 30 months at cost of approximately $1.1 billion.

The operable roof comprises one of the distinguishing features of the sports complex. At approximately 5.5 acres, it is the largest single-panel moving roof in the world, according to the Fort Worth Business Press. In approximately 15 minutes, 10 motors convey a steel structure covered in ethylene tetrafluoroethylene (ETFE) — a light-weight, heat resistant film originally developed for aerospace applications — along rails similar to those on which trains roll. Ten steel trusses, weighing an average of 500 tons each, support the immense panel. 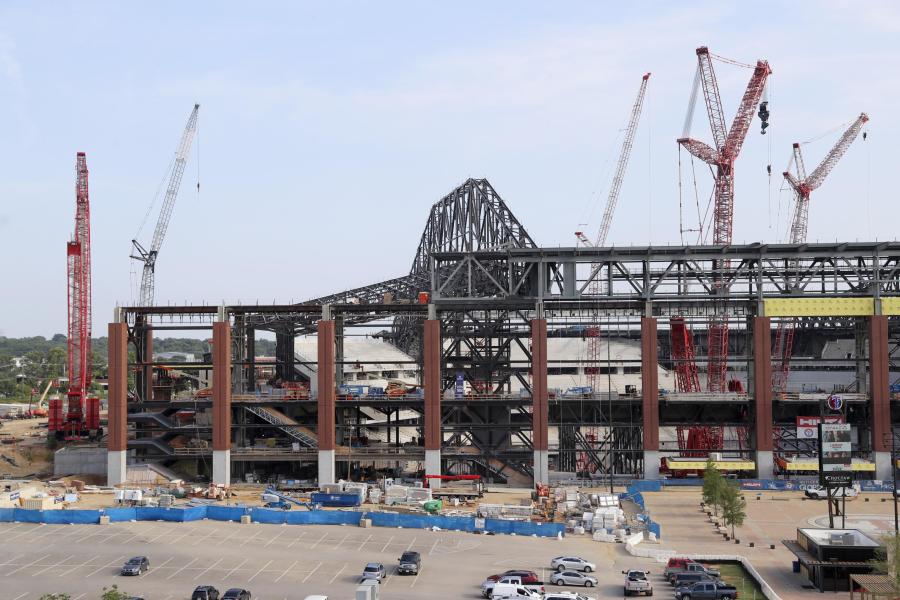 W&W Steel Erectors installed the first truss during February 2019, and the completed roof closed for the first time by December of that year. To accomplish this endeavor, the construction team hoisted a total of 19,000 tons of steel to heights exceeding 230 ft.

One hundred and fifty trucks bearing a modern-day mammoth arrived during December 2018 to facilitate the monumental undertaking; the Manitowoc 31000 is the largest American-made crawler crane, able to lift up to 1,100 tons as high as 361 ft. from its base.

"The 31,000 takes up a lot of space and requires a lot of coordination with not only W&W but with all trade partners to keep progress moving forward," said Manhattan Construction Company Vice President Jim Cuddihee.

"The erection of the crane and the 150 trucks required was highly coordinated, not only on-site, but we also arranged for the city to provide police escorts for the truck transport of the crane parts to the ballpark," Cuddihee added.

The team took two weeks to assemble the crane; and planning to dismantle it took place from the beginning.

"We only had a couple of feet to play with when the structure was complete," Cuddihee said.

Roof construction started on the west end. The construction team assembled large sections of the steel structures in the stadium bowl — 50 ft. below street level — one of the truss pieces exceeding 700 tons. Describing the process, Cuddihee said, "Each of the roof's five truss pairs were erected in three sections: north, middle and south sections. After one truss was completely erected, we slid down the rail to the west to set the next truss. Once the first and second truss pairs were erected entirely, they were tied together with more steel." 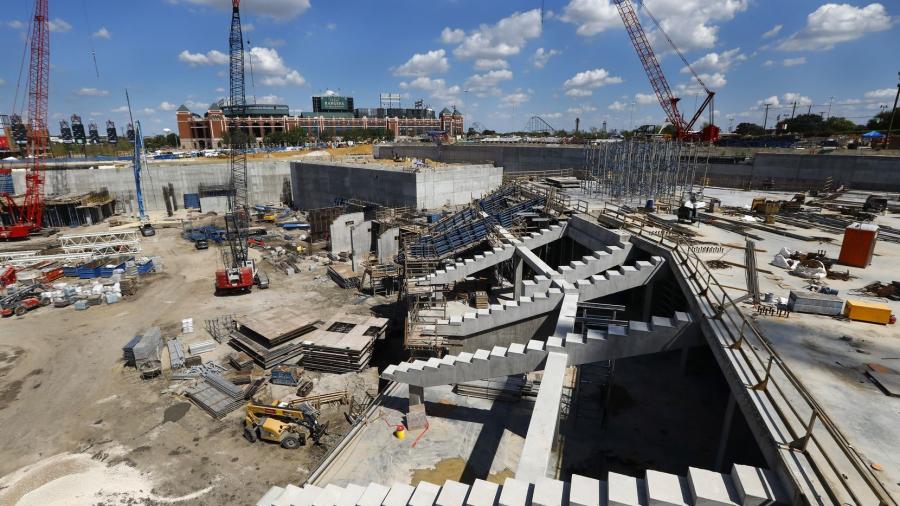 To prevent the venture from devolving into a frenetic pandemonium, the team employed drones. The DJI Phantom 4 Pro tracked the progress of production and assisted with the logistics of equipment and materials on an extraordinarily tight site.

"During the project's construction, the ballpark's foundations, the bowl structure and the roof structure were being built simultaneously in different phases," said Cuddihee. "To keep up with the tight schedule, crews picked and set the trusses and maneuvered around the stadium bowl full of steel beams, cranes, and workers from various trade. Drone images were used in trade partner meetings to plan and coordinate activities in the coming days and weeks."

As for the prestige of the Build America award, it emanates from the story of AGC's origins. The organization formed in 1919 in response to a call from U.S. President Woodrow Wilson for leading construction companies to form an organization to address the problem of mobilizing on the scale required to win World War I.

According to a 2011 U.S. Builder's Review report, "AGC is today the oldest and largest national construction trade association in the United States," with more than 32,000 members — 7,000 of which are leading general contractors.

AGC consistently describes the Build America awards as the "Oscars" of the construction industry. The organization's website states that the award-winners are chosen by its members to "have demonstrated the very best when it comes to building a better America and improving our quality of life," and echoes 2009 President J. Doug Pruit's sentiment, "These projects, with their vision, scope and grandeur literally dare to challenge, dare to change." 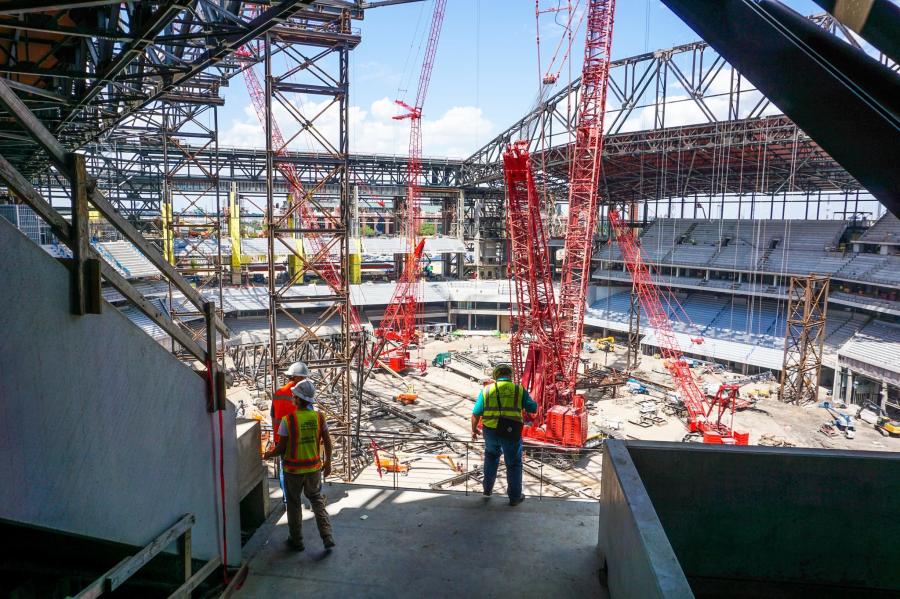 Past commensurate winners include a joint venture by Holder, Hunt, Russell and Moody in 2018 for the Mercedes-Benz Stadium in Atlanta, Ga. — a 72,000 to 80,000 seat stadium for National Football League and Major League Soccer games.

Last year the award went to Donley's Turner for the 485,000 sq.-ft. Sheila and Eric Samson Pavilion on the Health Education Campus at Case Western Reserve Univesity's School of Medicine in Cleveland, Ohio — the first facility for interprofessional education of medical, nursing, dental and physician assistant students.

Manhattan is well-positioned to produce a grand slam sports complex. Laurence H. Rooney launched the company in 1896 from the Oklahoma Territory, making the organization almost as old as baseball itself. As the flagship company of the Manhattan Construction Group, the Manhattan Construction Company endures as a fifth generation family-owned operation, according to its website, and it is "one of the largest privately-held construction companies in the country."

With more than $30 billion put in place in its portfolio and $5 billion in green-building projects, Globe Life Field constitutes Manhattan's fifth OSHA partnership. The meticulousness of Manhattan's planning radiates from its own articulation of a timeless formula: "The success of our projects is achieved by the hard work and expertise of our team members….we build excellence and trust. It's a package deal." CEG