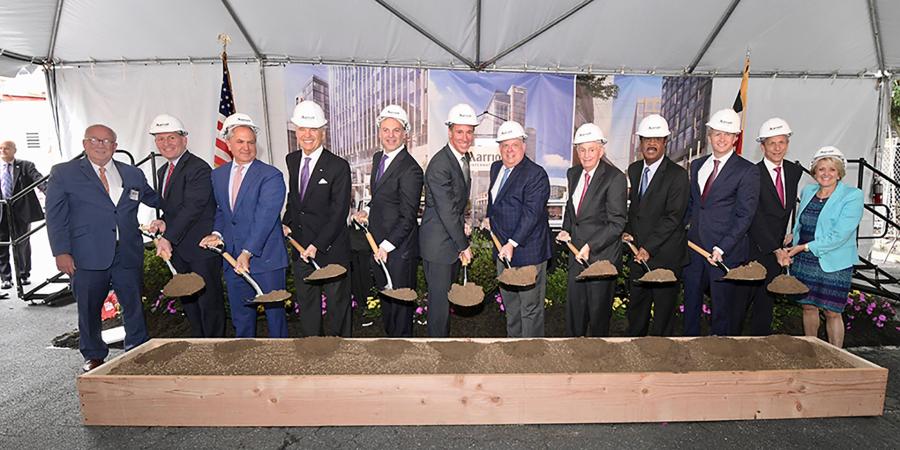 The Bernstein Companies and its joint venture partner Boston Properties marked a significant milestone as it broke ground on the future Marriott International headquarters and Marriott Hotel in downtown Bethesda, Md.

The Bernstein Companies and its joint venture partner Boston Properties marked a significant milestone June 21 as it broke ground on the future Marriott International headquarters and Marriott Hotel in downtown Bethesda, Md.

J.W. Marriott Jr., executive chairman and chairman of the board of Marriott International, opened the ceremony by welcoming Maryland Gov. Larry Hogan, Montgomery County executive Isiah Leggett and other public and private dignitaries to celebrate the first phase of construction of the company's new headquarters.

“Montgomery County has been our home for more than 60 years and we take immense pride in this community and in the strong relationships we've developed here,” said Marriott. “From our humble roots as a nine-stool root beer stand in downtown Washington, D.C., to a hospitality company known around the world, we look forward to many more years together as we create a new, 21st century home in downtown Bethesda.”

“We are thrilled to be recommitting ourselves to Maryland and investing in Bethesda,” said Sorenson. “This location places Marriott in the heart of a vigorous, educated and diverse community. We firmly believe downtown Bethesda is a vital economic engine with a very bright future and a great place to call home.”

Sorenson said the headquarters office building will be a cutting-edge, sustainable, workplace offering modern technology and amenities, and easy access to a range of transportation options, including the Bethesda Metro Station less than two blocks away.

With more than 785,000 sq. ft. of office space to support approximately 3,500 associates, the headquarters building is designed to LEED GOLD standards, allowing an abundance of natural light, while providing new opportunities for flexible, collaborative workspaces. The campus also will offer Marriott associates a childcare center, a fitness center and a cafeteria.

In addition to the headquarters building, the location will be home to a new Marriott Hotel, a 244-key, full-service property with more than 8,000 sq. ft. of meeting and ballroom space. The hotel will offer guests and the public access to a coffee shop, a roof-top bar and lounge and a contemporary neighborhood restaurant serving breakfast, lunch and dinner with the option of outdoor dining on a pedestrian plaza.

“For [more than] 60 years, Marriott has shown such loyalty and commitment to the future of our state — infusing more than $430 million into our state economy,” said Hogan. “Today we are seeing even more proof, and a shining example, of the incredible progress we are making. Thank you to Bill Marriott, Arne Sorenson and everyone involved in this project for your commitment and dedication to Montgomery County and the State of Maryland.”

Hogan was joined at the celebratory event by other state and local officials, including Leggett, who led the local effort to keep Marriott in Montgomery County.

“I am thrilled that Marriott chose to celebrate its 90th year in business by selecting Montgomery County for its future headquarters,” said Leggett. “Today is a special day in the county's economic life. With a clear target and a supremely coordinated bipartisan effort, much was achieved in keeping Marriott in Montgomery County, and success is shared. I may be leaving the scene soon, but I trust Marriott will call Montgomery home for 90 years to come.”

In December 2017, the developers received formal approval of the sketch, preliminary and site plans from the Montgomery County Planning Board. Demolition was expected to begin in June 2018 and construction is scheduled to begin in July. In early 2022, the Marriott Hotel will open and Marriott International associates will move into their new headquarters office building by mid-2022.

“Today we celebrate the transformation of the land and property The Bernstein Companies has owned here for more than 30 years,” said Adam Bernstein, president and chief executive officer of The Bernstein Companies. “We are excited to partner with Marriott International and Boston Properties to apply our joint expertise to this trophy development. There are few corporations in the world of the stature of Marriott and we are honored, even after 85 years in the development industry, to participate in this new venture that continues Marriott's legacy in Montgomery County.”

“Today is about persistence, progress and great partners,” said Raymond Ritchey, senior executive vice president of Boston Properties. “Marriott International set the standard, Montgomery County and Maryland provided the push, and the Bethesda community encouraged us to create something special here. We can't wait to get started.”

As of 2017, Marriott International supported more than 10,000 jobs throughout Maryland, and approximately 6,100 in Montgomery County alone, making the company one of the county's largest private employers.

According to an economic report, the project will have a considerable impact on Maryland's economy, including $89 million in construction salaries over the next few years, $2.3 billion in business activities in its first year of operation, and up to $1.8 billion provided for local taxing districts over the next 20 years.

In honor of Marriott's history, the company and the development team provided invited guests with commemorative root beer mugs filled with root beer. The company's roots date back to 1927, when founders J. Willard Marriott and his wife, Alice, opened a small, nine-stool A&W Root Beer stand in Washington, D.C., which eventually became the Hot Shoppes restaurants enterprise, a public company in 1953 that grew to 56 restaurants. Marriott wouldn't make its historic entry into the hotel business until 1957.

Since then, Marriott International has called Montgomery County home for more than 60 years and has resided in its current location on Fernwood Road since 1979. In that time, the company has grown exponentially and, with its acquisition of Starwood Hotels & Resorts in September 2016, Marriott's portfolio now includes 30 brands, with more than 6,500 properties located in 127 countries and territories, with more than 700,000 people wearing the Marriott badge around the world.