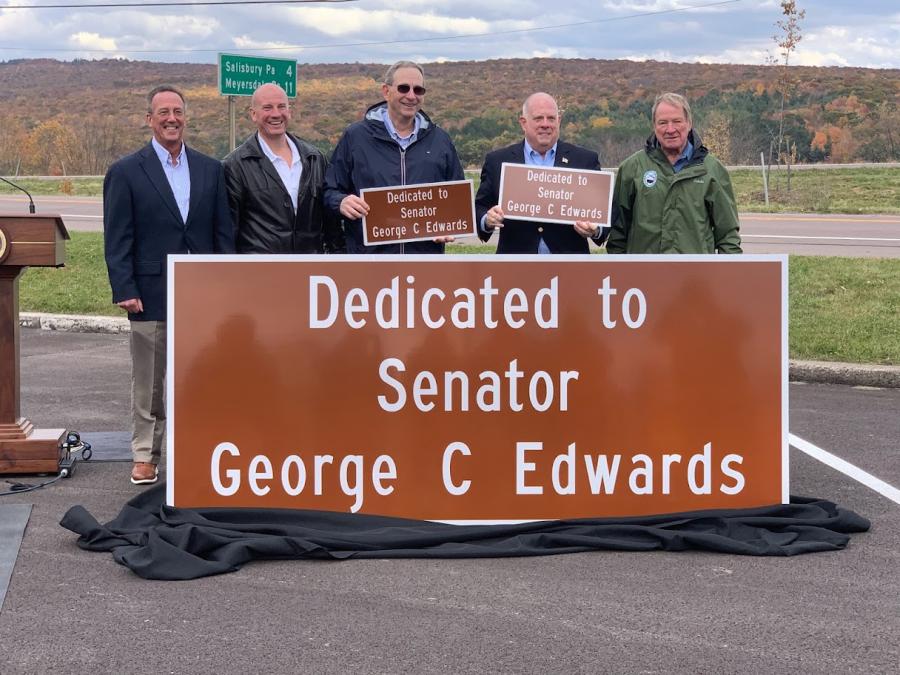 As part of a four-day scheduled visit to the western part of the state, Maryland Gov. Larry Hogan stopped in Grantsville on Oct. 17 to announce $77 million in funding that will complete the remaining 8-mi. segment of U.S. 219 between I-68 and the Pennsylvania Turnpike, which includes 1 mi. in Maryland.

"It's really great to be back in Garrett County," Hogan said, and mentioned the Appalachian Regional Commission meeting at Rocky Gap in Allegany County, which he chairs. He noted that the conference is focused on regional collaboration and fostering economic development.

"Today, we're making an exciting announcement that does both," Hogan said. "It involves working together with our federal, regional and local partners, and it will be a major boon for both the state and local economy. As chairman of the nation's governors, I pushed for two years to broker a deal on a bipartisan infrastructure bill. And we're proud that Maryland has one of the most aggressive implementation strategies in America. As a result, we're announcing that we're committing an additional $77 million to complete the U.S. 219 extension from Old Salisbury Road all the way to the Pennsylvania state line."

Hogan spoke of how western Maryland is an important gateway to vital commercial corridors, and for decades, improving 219 has been the number one transportation priority for local leaders, businesses and residents of Garrett County. He made a commitment at the very beginning of his administration.

In 2015, $2 billion was invested in highways and bridges across the state, including $65 million for Phase 1 of the 219 Project. Working with the county, construction on that segment was completed from I-68 to Old Salisbury Road in May 2021.

"Now, in partnership with the Pennsylvania Department of Transportation, we are realigning and expanding the final phase of Maryland's eight-mile portion of the bi-state U.S. 219 corridor," Hogan said. "The completion of this project will have a dramatic impact on economic vitality throughout the north-south corridor. Millions of tons of freight move through western Maryland every year, on I-68 I-70, I-81 and U.S. 40 Alternate, and a fully upgraded and realigned U.S. 219 will greatly enhance connections to these critical routes. It will give Grantsville residents better access points in Garrett County and in southwestern Pennsylvania.

Hogan stated that the project is another important step in the full vision for the Appalachian Development Highway System, a more than 3,000-mi. multi-state network first established in 1965 to generate economic vitality in remote areas and to provide access to markets in the region and across the country.

As part of the presentation, Hogan also announced that this new portion of road would be dedicated to Senator George Edwards, who is from Grantsville and will be retiring in January after 40 years in the General Assembly. He spent 24 years in the House of Delegates and 16 in the Senate.

Hogan said that the project is a "shining example" of government at all levels working together. He recognized Edwards as a "tremendous champion" not just for the 219 improvements, but for all of the top priorities of western Maryland.

"He's been a trusted and dedicated public servant in the state of Maryland for many decades," Hogan said. "He's been a true friend and partner with our administration. After 40 incredible years of service, he is retiring this year, and so in addition to today's announcement that we're going to be building this final phase, it is also my distinct honor to officially dedicate Maryland's portion of U.S. 219 to Senator George Edwards."

Edwards thanked the governor for coming to Garrett County and for his friendship over a long period of time. He said that when Hogan announced he was running for governor, he asked if there was anything he could do.

"I leaned over and I said ‘yeah, you can finish the 219 project in Garrett County,'" Edwards said. "Gov. Hogan said ‘I'll look into it.'"

He noted that this is the kind of project that involves all of the government working together to actually get something done. He mentioned the federal government, the state government and the county government. He also thanked Del. Wendell Beitzel, who was in attendance, and later mentioned assistance from Dave Moe, Colleen Peterson, Jennifer Walsh, Rep. David Trone and Sen. Ben Cardin.

Construction on the new project should begin in 2028 and is expected to be completed by 2031. The funding of $77 million includes design, right-of-way and construction.

The project builds on the previous MDOT SHA realignment to the south and PennDOT's realignments to the north.

Benefits reported by MDOT are that the project improves conditions for economic development by upgrading a key north-south connector and also enables MDOT SHA to continue its US 219 project development partnership with PennDOT.

The first phase of the project took three years and a total of $63 million. It created a four-lane section of US 219 between Interstate 68 and Old Salisbury Road. This was part of Hogan's $1.97 billion investment in highways and bridges and has been a top priority of Garrett County for decades.

The new four-lane highway has two 12-ft. lanes, an 8-ft. inside shoulder and a 10-ft. outside shoulder in each direction. The highway also includes two roundabouts, turn lanes connecting to U.S. 219 Business and a new median.

Triton Construction Inc. of West Virginia was MDOT SHA's contractor on Phase I.

Other work in the contract included resurfacing and restriping the I-68 interchange U.S. 40 Alternate at U.S. 219 and existing U.S. 219 at the tie-in point at Old Salisbury Road; several major storm-water management facilities and underground drainage systems; environmental controls such as wetland creation and restoration; installation of LED highway lighting systems; and overhead highway sign installation. CEG