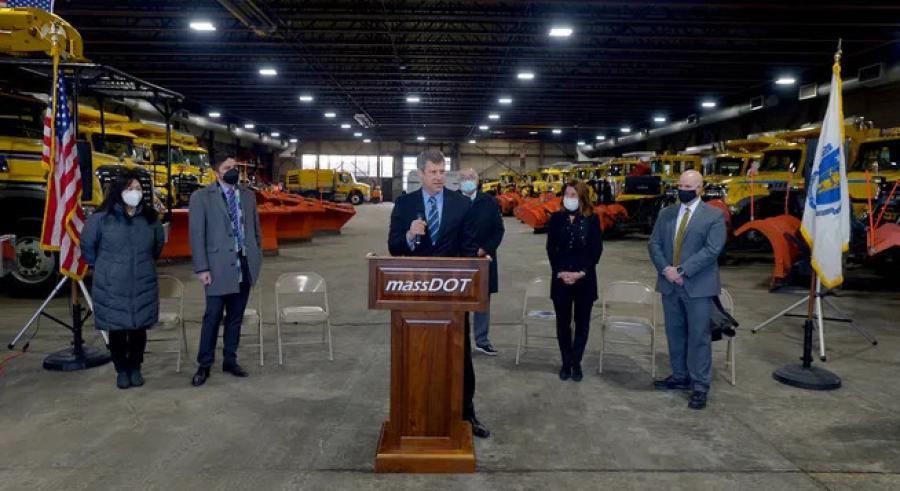 Throughout the state, millions of dollars have been doled out for new public spaces like sidewalks and streets, as well as for improving or maintaining existing infrastructure.

"Municipal programs have always been a lifeline for cities and towns in Massachusetts, which the Baker-Polito administration has expanded dramatically," noted Jonathan Gulliver, MassDOT's highway administrator.

Gulliver said what began as a single program has expanded to five, resulting in a "$178 million investment" in the state.

Polito recalled that the first executive order that Gov. Charlie Baker signed when he took office in 2015 was "No. 554: Creating the Community Compact Cabinet," which established a group chaired by Polito to make connections, set standards, and gather feedback from municipalities, in part because "cities and towns are at the front lines of delivering services to the citizens of the Commonwealth," according to a summary of the order.

"We made a commitment to our cities and towns that we were going to prioritize and work with you and make sure that we're exchanging and sharing information," Polito told the gathering. "It's through that relationship that we learned how to make sure that these programs ... not just that they're a resource, but they work for you, that they're efficient, that they're quick and easy to apply to so that we get the funds into your hands to do meaningful work in your community."

Polito added that Framingham has received $2.4 million in municipal grants from MassDOT since 2016.

"We're always on the lookout for how we can leverage state and federal money to help us," said Bill Sedewitz, acting director of the Framingham's Department of Public Works (DPW) after the lieutenant governor's remarks.

In a press release, Framingham officials announced Jan. 18 that the city's DPW and the Planning and Community Development Department are the recipients of a $400,000 Complete Streets grant.

The monies will cover the first construction phase for improvements on Loring Drive and Western Avenue, including new sidewalks and curb ramps. Funding also will be used to install a new crosswalk that will connect the new sidewalks to the MetroWest Regional Transit Authority bus stop near 110 Western Ave.

A second construction effort will include building designated bike lanes and performing road resurfacing, but that work will require a second round of funding, which the city will request, Framingham officials said in the news release.

Although the Shared Streets and Spaces program has only been around since last June, it has already awarded $33 million to more than 150 municipalities and transit authorities. The program is intended to fund quick projects for public spaces, like improvements to bus stops and sidewalks, and the installation of parklets and bikeshare stations.

"It was the municipalities that came to us and said we can better use parking lots and sidewalks and areas of our streets to open up outdoor dining so that people feel comfortable getting out and supporting our businesses," Polito told MetroWest.

The deadline for applying for the next round of Shared Streets and Spaces grants is March 1. All municipalities and transit authorities are eligible to submit proposals.

Polito also noted that Massachusetts is relaunching the Municipal Small Bridge Program, with Feb. 1 set as the date the commonwealth will begin accepting applications.

"We learned in our travels that many of these small bridges that, fortunately, are owned by cities and towns, and culverts that go with them, are very costly to maintain or improve," she said. "If they go out of use, they can be very disruptive to getting kids to school safely, having businesses thrive, and just allowing your community [to] connect people and places for emergency purposes."

Two Other Road Programs in Place

A duo of additional programs that were mentioned Jan. 18, MetroWest noted, include the Municipal Pavement initiative, which Polito said can be especially helpful for smaller communities experiencing difficulties supporting their existing road infrastructure. The other is the Local Bottleneck Reduction program, aimed at "hotspots" for traffic, although only signaled intersections owned and operated by the municipality are eligible for that grant.

"As the lieutenant governor said, [these grants] help us do things that we can't accomplish with our own local budgets," Sisitsky said in his remarks. "The ability to work with the state and get these programs going helps everybody, [including] all of our residents and [those] that visit our communities."