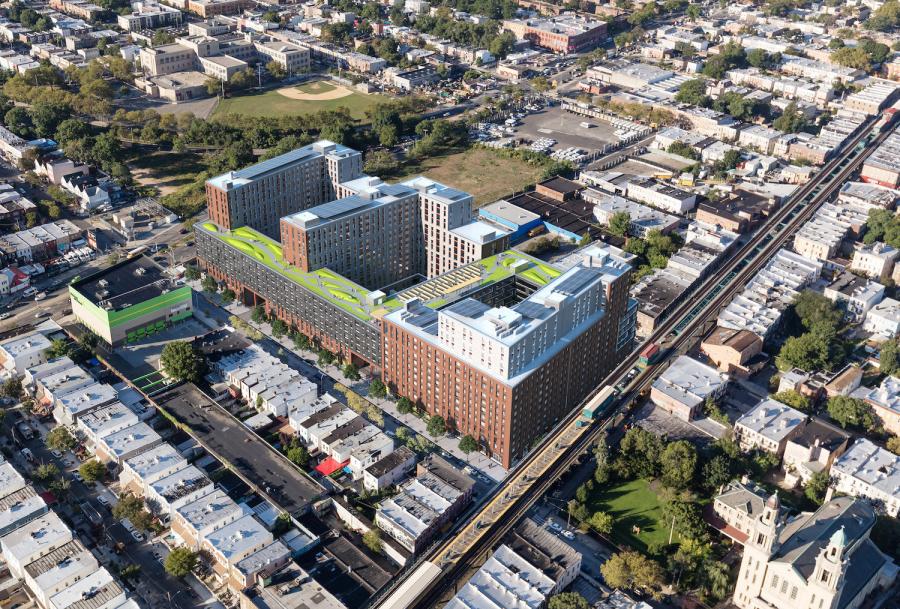 Construction is set to begin on the massive Atlantic Chestnut project in Brooklyn, N.Y., with plans to eventually bring 1,165 affordable apartments to the east New York neighborhood.

Phipps Housing, the oldest and largest nonprofit developer, owner and manager of affordable housing in New York City, is leading the effort to bring more apartment space to the area for lower income people.

The new homes will occupy the block bound by Atlantic and Euclid avenues and Fulton and Chestnut streets.

Brooklyn Paper reported that the Atlantic Chestnut apartment block is the largest building project in the neighborhood since the 2016 east New York rezoning.

The construction will follow the nonprofit's recent security of $217 million in funding for the first of three phases at the Brooklyn site, according to New York YIMBY, a local construction and development news source. Those monies were provided to the developer by Wells Fargo and by two municipal agencies: the New York City Department of Housing Preservation and Development (HPD), and the New York City Housing Development Corporation (HDC).

Phipps plans to build two additional buildings to complete the project, noted Brooklyn Paper, but has yet to secure financing for them. The developer purchased the property in 2015 for $36 million.

Plans call for the first building to be finished in 2023, with 403 apartments set aside for families making between 40 and 80 percent of the area median income. Another 15 percent of the units will be for formerly homeless people.

Atlantic Chestnut's apartments are geared to be 100 percent affordable, with no market-rate units, according to Adam Weinstein, president and CEO of Phipps Houses.

"Our commitment to an affordable city must ensure that we build units that allow families to grow in their homes and build deep connections in their neighborhoods," he explained in a statement to both Brooklyn Paper and New York YIMBY. "We look forward not only to providing nearly 1,200 units of critically needed, deeply affordable housing on this long-vacant site, but also to providing on-site support for residents and the community through service programs in partnership with community-based service providers."

The unit mix at the apartment complex calls for 49 percent of the total inventory being two- and three-bedrooms, with another 41 percent comprised of one-bedrooms, and approximately 10 percent will be studio residences.

The new apartment site also will include commercial space, as well as open space and community amenities for residents, including a rooftop deck, a courtyard, and 200 parking spots. Social services will be provided on-site by a local nonprofit for residents as well.

New York YIMBY noted that Manhattan-based Dattner Architects is handling the design for the Atlantic Chestnut development while Monadnock Construction in Brooklyn will build the project.

Atlantic Chestnut 1 will be located at 250 Euclid Street and will range from eight to 14 stories high. The site was once occupied by a factory that was destroyed in July 2014 by a fire. Since then, the lot has been improved through the New York State Brownfield Cleanup Program.

"Having followed the plans for the Atlantic Chestnut development from its beginning, I am delighted to see the overwhelming commitment our partners — Phipps Houses, HPD, HDC, Wells Fargo, Dattner Architects and Monadnock Construction — have shown in working together and seeing this through," said Deputy Mayor of Housing and Economic Development Vicki Been in the news release.

"The development will bring almost 1,200 homes to New Yorkers in east New York, including a significant percentage for our formerly houseless community. This builds on our momentum to meet the city's goal to provide 300,000 affordable homes by 2026."