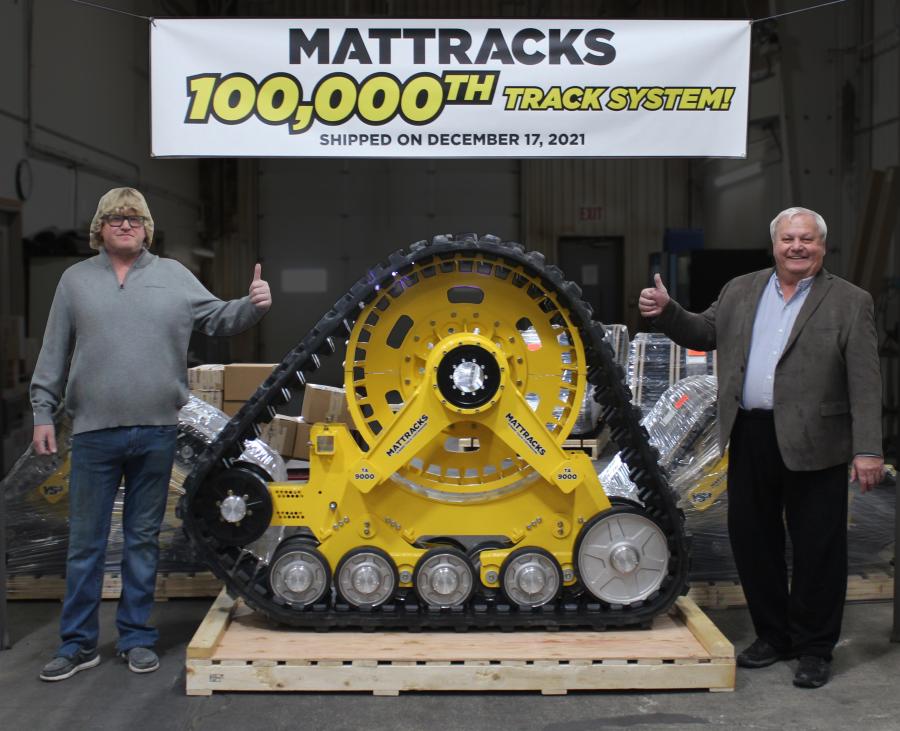 Mattracks, a world leader, innovator and inventor of the wheel to rubber track conversion system, officially shipped out its 100,000th track system on Dec. 17, 2021. This milestone comes 27 years after the company's founding in 1994.

In this nearly three-decades of innovation Mattracks has gone worldwide, selling its track systems engineered to accommodate virtually any multi-axle vehicle on all seven continents and more than 100 countries.

The international company's headquarters remain located in Karlstad, Minn., where it currently manufactures more than 150 different models which range in price from $2,500 to over $250,000. These systems are utilized on ATV's, UTV's, trucks, tractors, agricultural equipment, construction equipment and military vehicles.

Mattracks Founder and CEO Glen Brazier holds more than 56 patents and counting, each of which has been engineered for the purpose of allowing Mattracks conversion systems to excel in both functionality and dependability.

"Mattracks are the original track conversion systems; any other track on the market is either an imitator or owes its heritage to Mattracks. Anybody who has ever attempted to copy Mattracks has traditionally been gone by the wayside in swift fashion," said Brazier.

"Our dedication to quality and design is what has kept us at the forefront of the industry since the beginning, and it's the very thing that has lead us down the path to shipping out this 100,000th track system. I'm proud to say that the future of Mattracks looks brighter than ever."

With the advent of a new airport in Karlstad on the horizon, business is projected to substantially increase for Mattracks as well as all other area businesses. Another portion of Mattracks that some may not be aware of is Kick'n Up Kountry, the Midwest's longest consecutively running music festival, which takes place annually at Wagon Wheel Ridge in Karlstad.

An extensive amount of Mattracks real-world product testing also takes place at Wagon Wheel Ridge. The WWR grounds not only house a test track, but Mattracks equipped vehicles also are utilized in the maintenance and development of festival infrastructure. The festival is scheduled for June 15 to 18 in 2022.

Recently, Mattracks was awarded contracts by several large-scale original equipment manufacturers (OEMs) to produce track systems to accommodate their own product lines. These OEMs include but are not limited to one of the largest defense contractors in the United States, the world's largest UTV manufacturer, the largest tracked mower company in the world and the global leader in specialty and access equipment.

This increase in OEM partnerships has doubled production in just a few short years, and is projected to double it again over the next several years as well, according to Mattracks.

In addition, Mattracks currently has its sights set on moving forward with several large expansions/additions to three of its manufacturing facilities in Karlstad, an endeavor that is projected to be completed within the next year. Each expansion has been specifically designed for the purpose of increasing productivity throughout the manufacturing process. All three expansions were projected to take place in 2019 but were since postponed due to the pandemic and recent economic climate.

In conjunction with the expansion, Mattracks also anticipates increasing its workforce by hiring 100-plus new career-oriented employees over the next five years. These new positions will include a wide-variety of different roles, several of them in the leadership and development category.