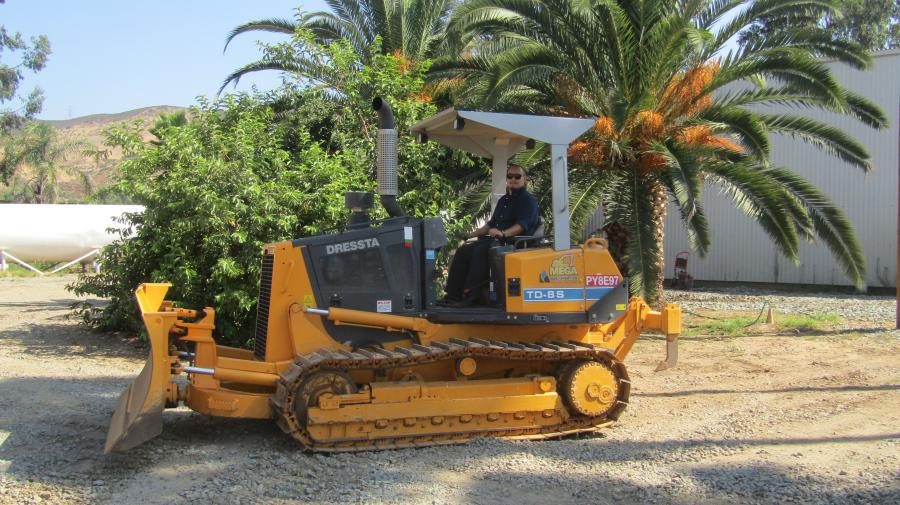 Mega Engineering of Lakeside, Calif., is currently grading residential building pads in Trevi-Hills, an upscale neighborhood in the mountains west of San Diego being developed by The Pacifica Companies.

Sounds like a typical, maybe even humdrum job for a grading and excavating contractor, but not so says owner Eric Olsen, whose company has completed 40 of what he hopes, will be 265 pads.

“Between the blue granite rock that is widespread in the area, and the loose colluvium sediments throughout the hills, each pad can be a challenge,” he said.

Because of the blue granite bedrock, many of the pads need to be raised as much as 10 ft., requiring the import of what will eventually be hundreds of thousands of tons of dirt. The colluvium present in the hills is a partial source of fill, but it requires considerable compaction once moved from the base of the slope where it has accumulated.

In addition, because the streets and utilities were already in place, every pad is an individual job, and equipment must be loaded and moved after its completion.

Mega is using a Dressta TD-15M dozer for “knocking down” the imported dirt, and the smaller TD-8S for finishing the pads.

“They have a very sleek, modern design, which brings with it great visibility,” he said. “They feature a six-sided cab, and come pre-wired for GPS.”

Interestingly, Olsen is not only the contractor on the job, but his company, Mega Machinery, is also the Dressta dealer in Southern California.

Mega Machinery Co. was established by Eric Olsen and his wife, Angela, with the idea of renting construction equipment. His first five rental machines were all Dresser dozers.

There is a certain comfort with which Olsen speaks of the Dressta dozer line, and with good reason. His relationship with the product line precedes the Dressta name, and in fact, goes all the way back to the mid 1970s when he took a job as a service manager for the International Harvester dealership in San Diego. He later sold Dresser dozers for the IH dealer until branching out on his own in 1989.

The Olsen name has been closely associated with the Dresser/Dressta name in Southern California ever since. Dresser owners looking to him for parts prompted Olsen to Mega Parts Distributing, which supplies parts for the Dresser and other lines. He also began selling used equipment at this time.

The recession in 1991 hurt the San Diego construction equipment market badly. The Olsens adapted by going into the excavating business and have remained there until now under Mega Engineering. Dresser, and later Dressta dozers, have formed the backbone of the company's fleet. Eric even has one of his old Dresser dozers that he purchased in 1986 and bought back in 2016.

While both Mega Parts Distributing and Mega Engineering flourished, Olsen saw a need for a supplier of quality new excavating equipment in 2013 and decided to open Mega Machinery.

He quickly secured the Dressta territory for Southern California to go along with his Doosan and Wacker Neuson lines.

The company now sells and rents a full line of new and used equipment, and maintains three service trucks. Olsen expects that number to grow as he focuses on building a world-class support team. Overall, the company employs 28 people.

“We have a real opening with Dressta in this market,” he said. “We are very pleased to represent the line.”