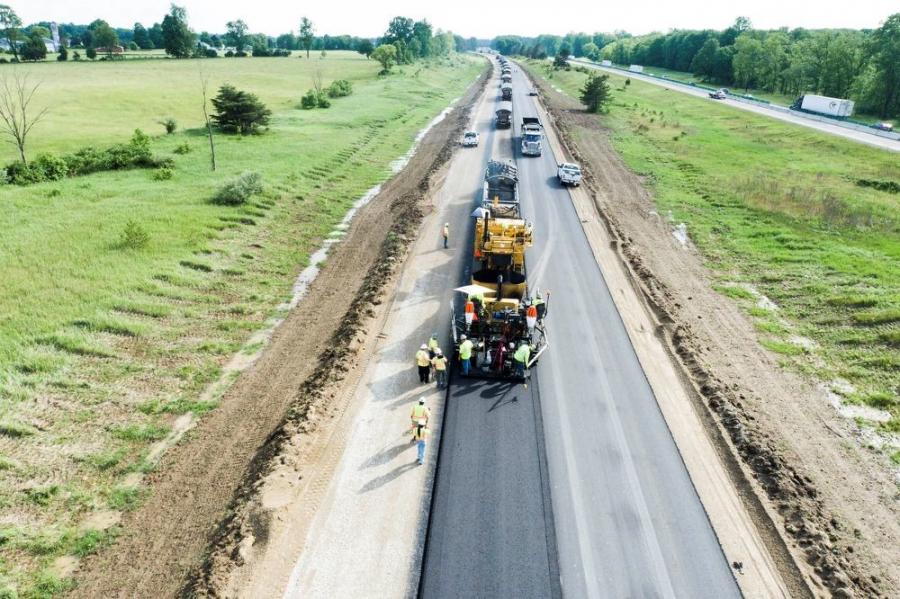 Trucks loaded with hot-mix asphalt are ready to transfer their loads to a shuttle buggy and then to the paver. (Michigan DOT photo)

The Michigan DOT had a solid plan for rebuilding I-69 in the southern part of the state. The plan called for four separate projects to be designed and constructed within eight years. 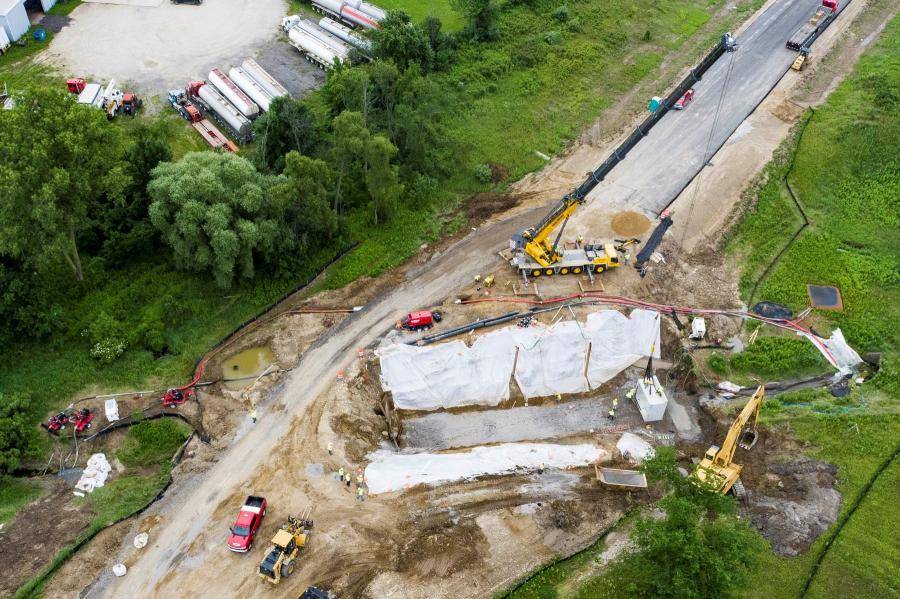 It was a good plan until the department made the decision to utilize its innovative contracting department and the design-build procurement method. When this method was announced to the Michigan contracting industry, Michigan Paving and Materials (CRH Company) jumped in. It put together a robust design and contracting team to tackle the project.

The new concept called for a tactic that would combine the four projects into a single design-build plan that would be completed in three years. The 22 mi. of road building would be more than twice the size of the next largest asphalt paving project in the last decade. The project also would include the rehabilitating of 26 bridges and the replacement of the Fifteen Mile Road Bridge over I-94.

As the first paving season winds down, the construction team has completed one-third of the $210-million-dollar project. When complete, the job will have used some 700,000 tons of asphalt and completely rebuilt the freeway from Marshall to Charlotte.

A key part of the plan was the removal and crushing of the old concrete freeway, which had come to its end of useful life.

"The old road was composed of nine inches of reinforced concrete with a one-inch-thick asphalt layer serving as a bond breaker between the two layers of concrete," said Mike Meyer, project and contracts engineer of the Michigan DOT. "The second layer was about seven to nine inches of non-reinforced concrete. The concrete was removed, then crushed on site and recycled for use as aggregate material for the new roadbed."

Crushing the concrete onsite created cost and environmental savings. This step meant less virgin stone had to be brought from quarries, which also saved trucking costs.

The new road is being constructed on an 18-in. sand subbase; 6-in. recycled aggregate base, topped with 10.5 in. of Superpave asphalt. The mix also included polymer to increase the flexibility and durability of the finished road. 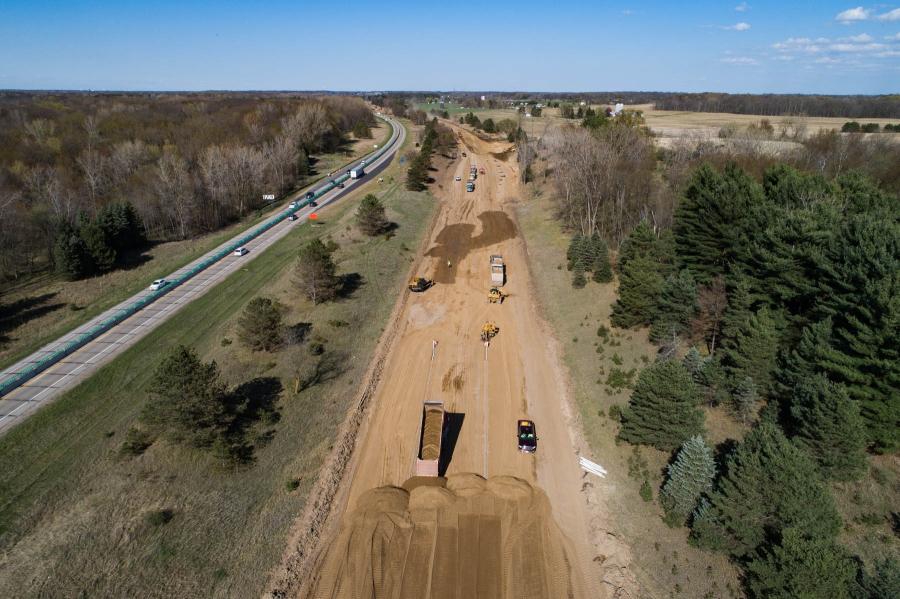 Michigan Paving and Materials was able to provide aggregate for the asphalt mix from its own resources. The company also imported some trap rock from Canada and from Michigan's Upper Peninsula.

The accelerated pace of the project was made possible because of the 200-ft.-wide median between the north and southbound lanes in this semi-rural part of the state.

"Our team built crossover lanes early in the construction process so we could push the traffic onto the other lanes, leaving two lanes of traffic wide open for us to work on," said Rick Thompson, design-build manager of Michigan Paving and Materials. "Getting that traffic completely out of the way gave us efficiencies in our building and crushing process. It also helped make the work area safer for our workers and contractors."

In many busy road projects, work is completed at night, turned over to traffic, then back to construction activities the next night. Keeping the work focused in a single area at a time led to fewer disruptions and additional cost savings.

The Michigan Paving team started in early March removing and crushing the existing roadway and removing unacceptable subgrade. Since the area is watered by numerous streams, the construction team had to install culverts and use some of the crushed concrete to properly manage the drainage. The team worked closely with Hoffman Bros. who handled much of the earthwork activity using a Lippmann 3062 jaw crusher and Lippmann 5165 impact crusher.

Once the earthwork and stream management were complete, the paving team went into action. They used a Cat A91055F paver and Weiler e2850 shuttle buggy to aid with smoothness and to prevent segregation. The team used Cat double drum and Hamm rubber tire HP180i rollers to achieve compaction.

Michigan Paving and Materials has asphalt plants in Jackson, Lansing and Kalamazoo. Each of the plants will be utilized as the three-year project progresses.

"In Michigan, we have a lot of freeze-thaw with some extreme temperatures," said Thompson. "That means pavements are susceptible to failure. So, we usually put more asphalt in the mixes. The use of Superpave fixes a lot of the rutting problems."

The mild winter helped the road-building team get a running start in 2021.

"We were able to get our plants open by April 15 and our construction season started ramping up in May," said Thompson. "We usually wind up our season around Thanksgiving."

While the paving work was operating full blast, Michigan Paving and Materials worked closely with Anlaan Corporation on important bridgework. The project calls for Fifteen Mile Road Bridge over I-94 to be replaced and significant work to be done on 26 other bridges. 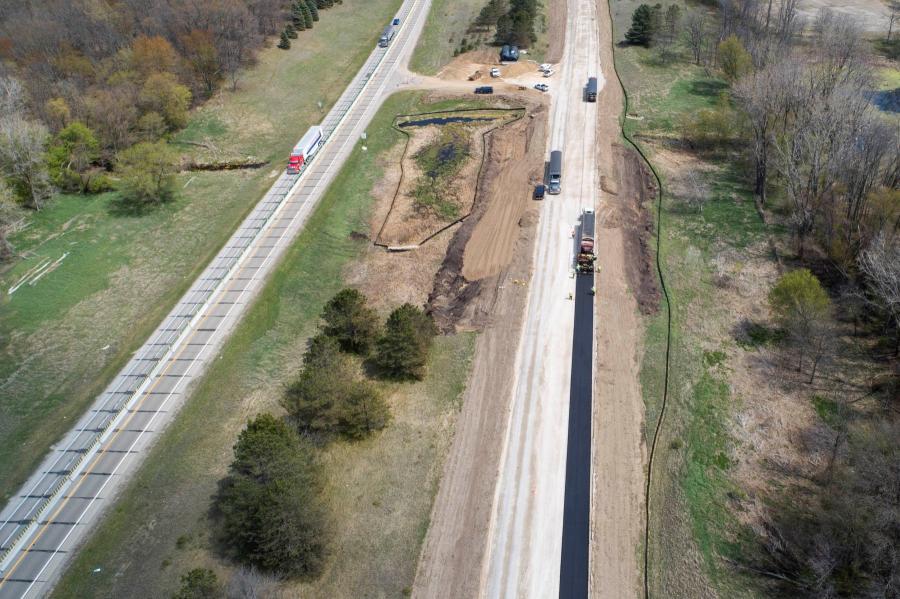 The work will vary from bridge to bridge depending on the amount of damage done through years by traffic and weather. The bridgework will include deep concrete overlay; structural steel repairs; bearing repairs; pin and hanger replacement; epoxy overlay; deck patching; full structural steel cleaning and coating; expansion joint device replacement; and scour protection.

"The entire project called for some innovative contracting," said Thompson of the design-build process. "MDOT gave us the parameters for the project, and we started in on the construction with just 25 percent of the design complete. As we are closing the first paving season, we have the project 75 percent designed. The design-build method has allowed us to expedite our schedules dramatically."

The design calls for the northernmost 10 mi. of the project to be completed by the end of 2021. In 2022, Michigan Paving and Materials plans to have 12 mi. of the northbound freeway complete. The work to complete 12 mi. of the southbound I-69 is scheduled to finish in 2023.

"I've been surprised at how well the job is moving forward so far," said Meyer. "I'm pleased with the relationship between Michigan Paving and the other players on the team. We are looking forward to meeting our goal of having the first 10 miles completed by mid-November." CEG