The South Memorial Parkway in Huntsville, Ala., was completed 11 months early. 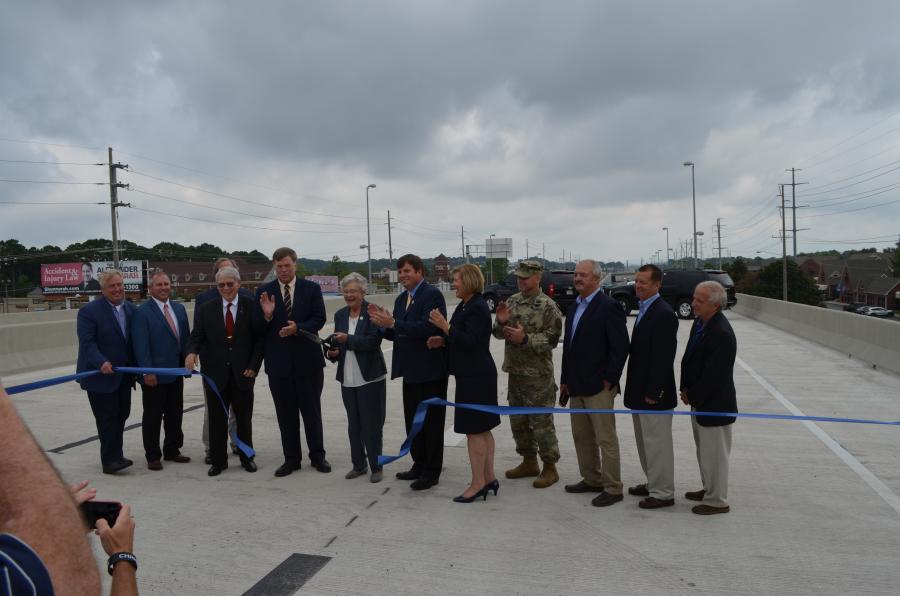 Huntsville Mayor Tommy Battles, Alabama Gov. Kay Ivy and Madison County Chairman Dale Strong were among those who turned out for the ribbon-cutting ceremony for the finished highway.

When they first heard the news in late 2015, motorists in Huntsville, Ala., dreaded what was ahead for them.

One of the city's lifelines, U.S. Highway 231, known locally as the South Memorial Parkway, was on the verge of getting a $54 million upgrade. That was the good news, but in the process of renovating the highway, the construction project, while only 1.8 mi. long, was undoubtedly going to include snarled traffic delays through the area.

Worst of all, in the minds of most commuters, it was planned as a four-year-long, two-phase operation. The first phase was set to be complete in December 2017, while the second phase was projected to be open to traffic in June 2019. 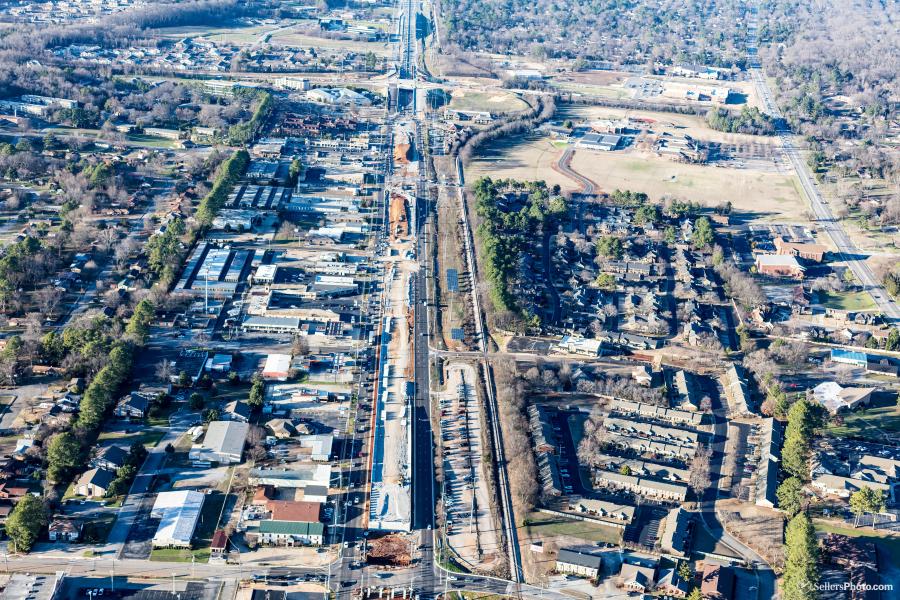 The work stretched from U.S. 231's intersection with Goff Road on the north end to Whitesburg Drive on the south.

The Alabama DOT warned drivers well ahead of time to expect traffic slowdowns while construction was under way, as well as some lane closures during the times of day when traffic was expected to be off-peak.

With no other options, for the next two years, drivers needing to travel along Huntsville's major north-south roadway accepted the consequences and looked forward to the day when the Parkway was completed.

So, imagine their surprise when ALDOT and its contractors finished and opened Phase 1 of the Parkway last August, about 3½ months ahead of schedule.

If that was not enough astonishment for regular drivers through Huntsville, ALDOT then announced in January 2018 that Phase 2 was progressing so quickly that Phase 2 might be completed as soon as this summer.

The state kept its word, as all lanes of the last portion of the new highway were opened on July 31, bringing the job to a close 11 months early. Reed is still performing some minor work on the road, but has almost miraculously been able to save motorists from any further headaches.

So, how did all this happen, exactly?

Many road projects struggle to make their projected deadlines due to a variety of factors.

This construction was not easy to complete, either, according to the prime contractor, Reed Contracting Services Inc. The company's north Alabama office is in Huntsville and is known as Reed Alabama. 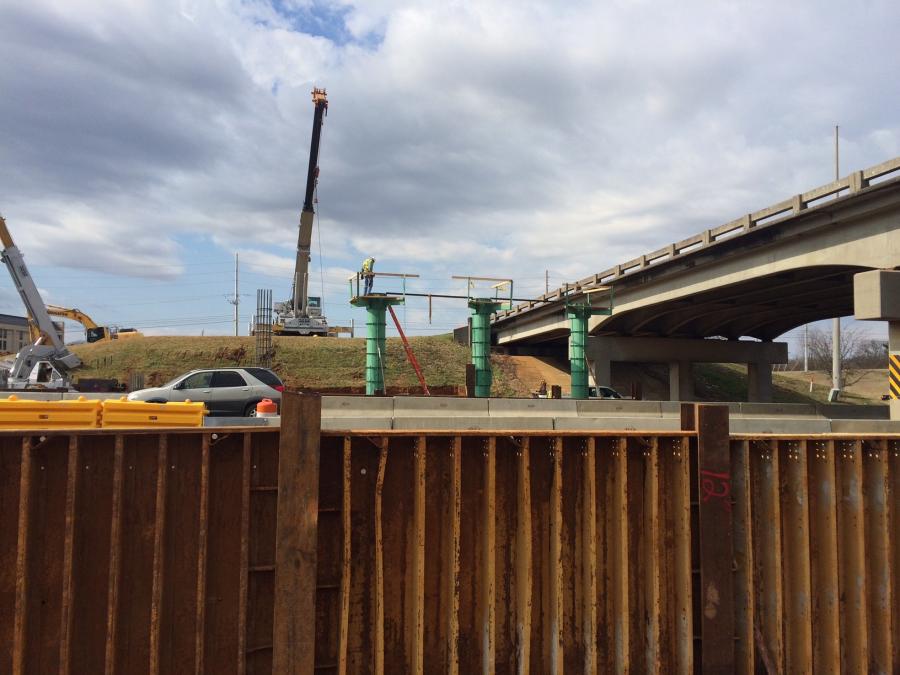 But, Reed Alabama was not alone in rehabbing the highway, as a vital part of the project involved Miller & Miller Inc., another well-respected Huntsville-based contractor renowned for its bridge and highway work. The two firms renovated the highway in a joint venture.

They also communicated extremely well to get the job done and received quick responses from both ALDOT and the city of Huntsville when problems arose, undoubtedly a big reason the work finished early.

A strict adherence to the project schedule also was important to the venture partners, considering the consequences for failing to complete by the specified completion date. The contract amount for liquidated damages was $30,000, charged for each day past the scheduled completion date, according to Reed Alabama.

The overall contract will, in the end, be worth between $54 million and $60 million.

“The team understood that it was essential that we concentrate our efforts on starting and finishing strong to make this project a success,” said Brad Payne, an executive and project manager at Reed Alabama. “To do that, we assembled the best possible project management team, along with onsite personnel.”

The impetus for the South Memorial Parkway project was converting it to a limited-access roadway, giving drivers an easier and faster way to move through the city's southside. Before construction, the five-lane highway (with a side access road) intersected with several cross-streets that had stoplights. Many businesses and homes are located off the Parkway, too, a factor that also heightens the traffic flow.

Plans called for the project to include two main lanes heading in each direction, along with another two service roads on the outside running parallel to them, both northbound and southbound. The stoplights were re-designed to be placed onto the service roads that feed into the Parkway lanes. 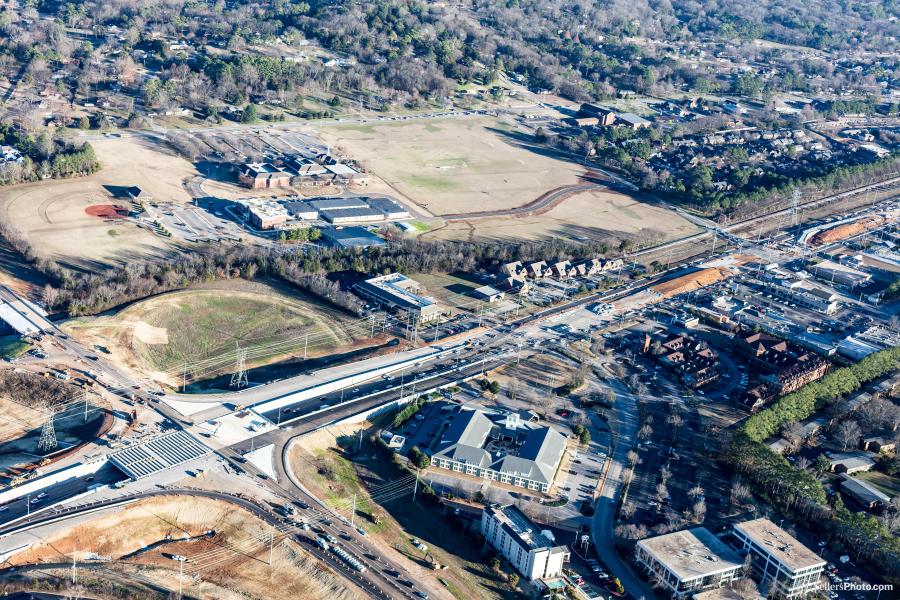 Another major reason to rehab that section of U.S. 231 was due to its proximity to the U.S. Army's Redstone Arsenal, which employs an average of between 36,000 and 40,000 government and contractor services employees each day.

One of the base's gates is located on Martin Road, a cross street on the northern end of the Parkway project. Many vehicles have used Martin Road overpass to access the base over the years and that bridge's replacement was a key component of the Reed Alabama/Miller & Miller work.

The beginning of Phase 1 of the road project was inundated with complications, said Payne, with the biggest obstacle being the installation of the underground utilities. He and his company understood early on that the conflicting utilities they encountered, as well as the proposed lines themselves, were going to be key to the success of the South Memorial Parkway project.

For instance, shortly after beginning work in December 2015, Reed Alabama encountered a concrete communication duct-bank running parallel with South Memorial Parkway, as well as a large gas main, fiber-optic communication cables, and the existing sanitary sewer line — all of which were within the limited right-of-way where the proposed utilities were designed to be installed. Existing businesses, intersecting side streets, and heavy traffic along the main highway route were among the many safety and production concerns. 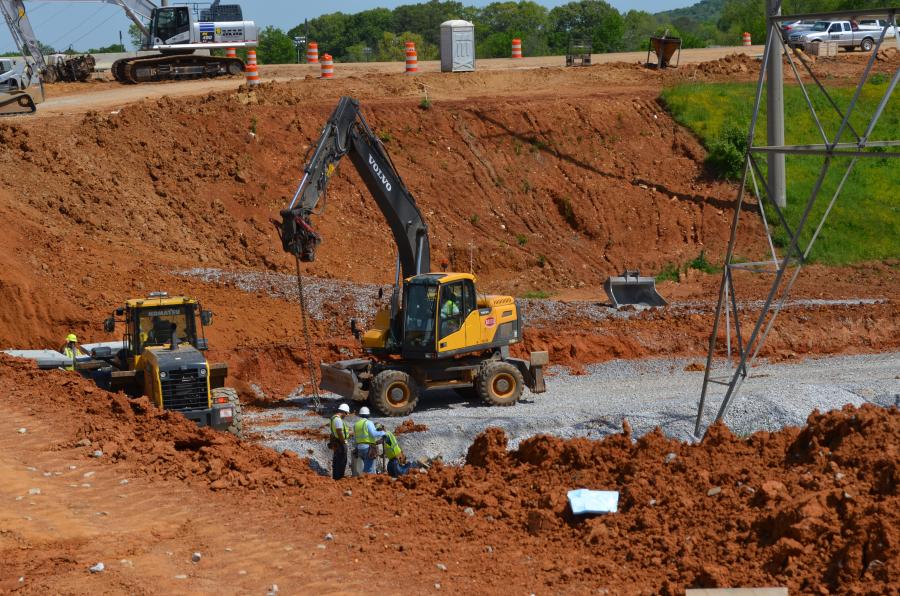 Jason Griggs, Reed's project manager on the job, said “there was a tremendous amount of underground utility work on this job — approximately 45,000 linear feet that had to be installed in the first phase and the site's tight area made it kind of challenging for us.”

Reed Alabama's initial priority was to concentrate specifically on installing the deepest proposed sewer lines, which hit a lowest depth of 20 feet.

“During the layout of the proposed sewer, it was discovered that the location of the new sewer line was in direct conflict with the existing TVA utility poles, which were standing right where we needed to make the install,” he said.

After exploring all available options, Reed Alabama's team decided to put the new sewer where the existing sewer was located using trenchless technology. The problem with this method, although widely done across the country, was that the sewer service on South Memorial Parkway and its cross street, could not be interrupted for too long due to the volume in that area.

Reed Alabama consulted with the city of Huntsville's engineering department and ALDOT, with the outcome being that it was decided to utilize a method known as “pipe bursting.” This trenchless boring technique allowed Reed's utilities subcontractor, LTS Construction, out of Winchester, Tenn., to run the new sewer in the same location as the existing while keeping the sewer live and in service.

Pipe bursting involves digging two pits, one launching pit and one receiving pit on each end of the section to be replaced. An expander head and the new line is then pulled by machine through the existing pipe. When that is done, the expander head “bursts” the old pipe and the new pipe is installed at the same time.

“We did different pulls, one at about 1,400 linear feet and the other at about 1,600 feet,” Griggs said. “HDPE [high-density polyethylene] pipe is put together on top of the ground before inserting it into the manhole on the upstream end. We then pulled that pipe through the existing one and burst open the old clay pipe. The broken-up clay holds the new pipe in place by filling the void between the new line and the soil.”

The manholes still needed to be replaced and the service connections made, but this method solved the contractor's dilemma with the new sewer installation.

While still considering the proper method use, though, another problem emerged, Payne said.

Although ALDOT was in favor of Reed Contracting using the clever, pipe-bursting alternative, there was no method for the state to pay Reed for implementing it. A special provision or specification for pipe bursting did not exist within ALDOT's contracts for utility work.

“After several conversations and meetings with ALDOT, though, their leadership in Montgomery implemented a special provision to allow us to proceed with the technique,” he explained. “It was approved quickly and let us complete this critical phase, something that was vital to the safety and success of the project.”

Miller & Miller's team on Phase 1 of the South Memorial Parkway included performing delicate work at the Martin Road elevated interchange, near the project's north end. The company demolished two existing bridges and built two new overpasses, as well as associated MSE, or reinforced soil, retaining walls. One of the bridges crosses over an existing railroad, while the other spans across the main highway. 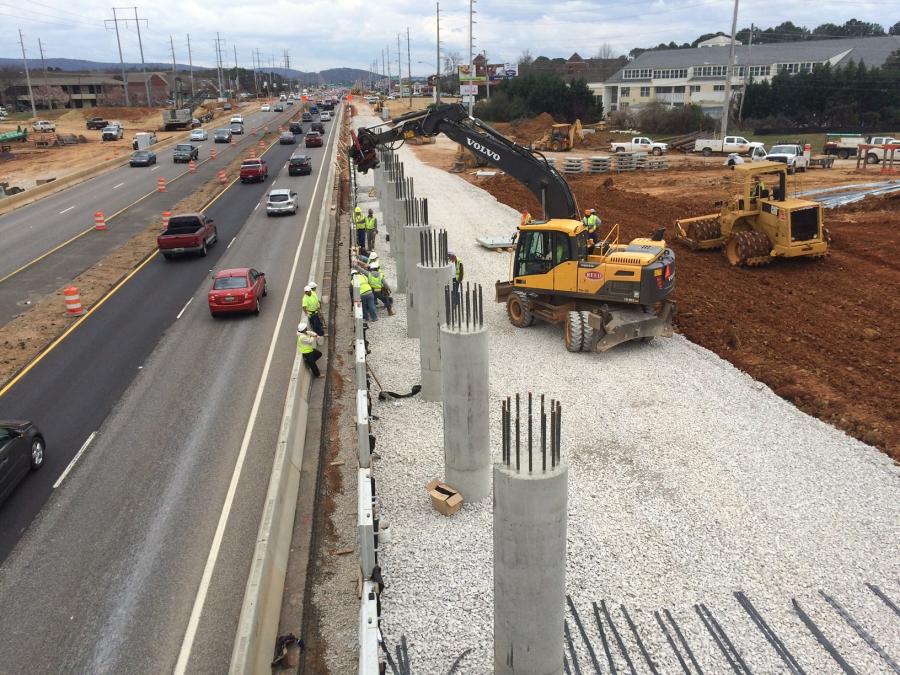 Skillfully and carefully, the work was performed while cars, trucks and trains continued to travel underneath.

“Once we built the south side of the new Martin Road overpass, we demoed the existing bridge where Martin Road crossed,” said Griggs. “We swapped traffic onto the new side of the overpass, then took down the bridge across the Parkway and built the new bridge in its place. There were also those TVA towers along the state's right of way where we had to build MSE walls around, which was a challenge.”

Reed continued to progress with the site work, concrete, asphalt paving and traffic striping for the next 20 months and devoted more than 169,000 man-hours without a single recordable injury. Miller & Miller, too, worked diligently to put in the necessary time and manpower to getting the project completed — in the process overcoming its own obstacles to finish the bridge work.

That success continued with Phase 2, which proved to be much less problematic. 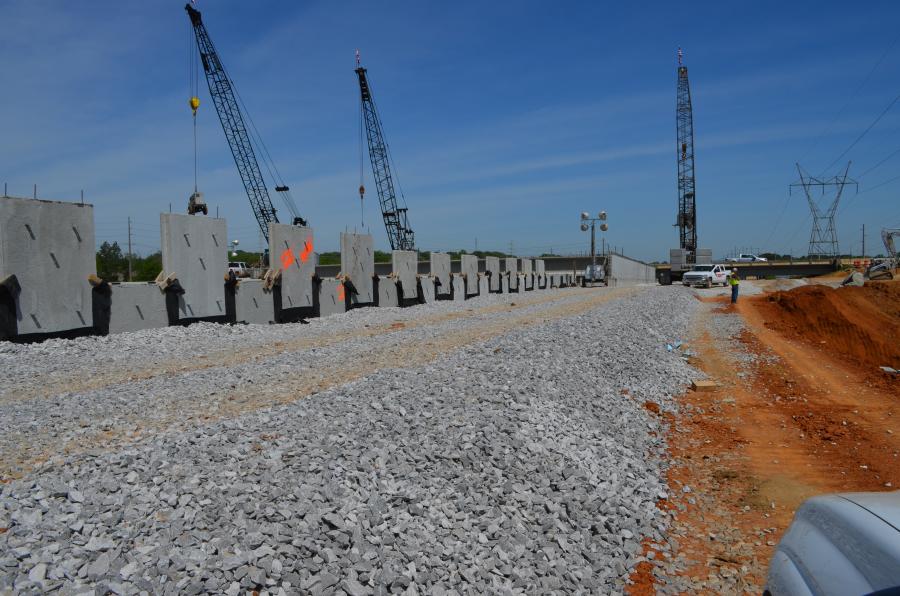 It consisted of new overpasses at the Byrd Spring Road and Lily Flagg Road intersections. Like the work farther north, crews installed all the mainline MSE walls, as well as grading, expanding and paving the service roads. On the main highway in the center, they also put in new asphalt pavement and completed new permanent striping and signage.

When asked, Jason Griggs said that Reed Alabama and Miller & Miller really hustled to get the entire job done quickly and correctly.

“Yeah, we did,” he said. “It was due to a lot of overtime by our guys — nights, Saturdays and Sundays, low traffic hours. There were just a lot of extras over and above that we did down there to make sure we completed this project ahead of schedule.”

Reed Contracting has serviced Alabama and the surrounding region since 1987. It has approximately 450 employees and a large yard full of construction equipment. Payne said the company's fleet is made up of several hundred pieces, containing a variety of machines, including Komatsu 390 excavators, Cat backhoes and Roadtec pavers and shuttle buggies, among others.