The approximately $6 million project results from a large-scale rock fall that occurred in early February 2015 and the threat of future rock falls. 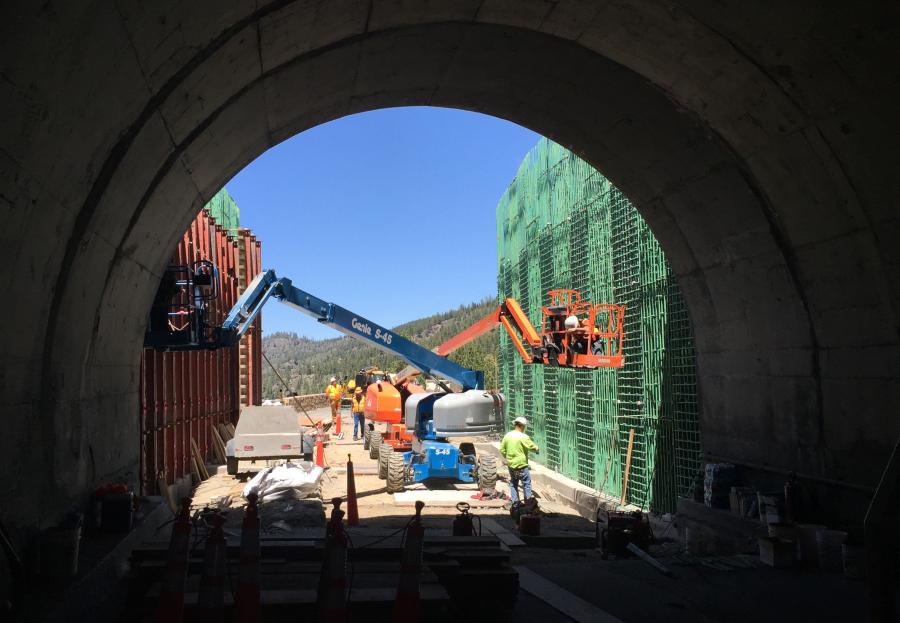 NDOT photo. In response to rock falls in the Lake Tahoe Basin, the Nevada Department of Transportation is overseeing construction of a tunnel extension on U.S. 50.

In response to rock falls in the Lake Tahoe Basin, the Nevada Department of Transportation is overseeing construction of a tunnel extension on U.S. 50.

The 60-ft. (18.2 m)-long, 27-ft. (8.2 m) tall flat-topped structure is on the north side of the westbound Cave Rock Tunnel. It will protect motorists and bicyclists by catching falling rocks, while blending in with the natural surroundings.

Colors, patterns and textures of the structure will match the adjacent rock faces.

The approximately $6 million project results from a large-scale rock fall that occurred in early February 2015 and the threat of future rock falls.

“Our goal is to provide a state transportation system to keep all of Nevada safe and connected,” said Meg Ragonese, public information officer of the Nevada Department of Transportation. “And the project will include other improvements to help keep everyone on the road safe.”

Lighting and white paint will be added inside each tunnel for better visibility, Ragonese added.

Storm water safety also is part of the project. Storm water quality improvements are being made in an area about one mile north of Cave Rock at Milepost 8.4 through Milepost 11.4.

Work on the tunnel and storm water improvements began in May of this year and is on schedule to conclude this fall.

Q & D Construction Inc. of Sparks, Nev., is contractor for the project.

Kurt Matzoll serves as project manager of Q & D Construction and John Angel is construction manager of the Nevada Department of Transportation.

Between 25 and 30 workers are on the Cave Rock job site each day.

The last concrete pour for the superstructure was completed July 14. Removal of false work and forms has begun.

Additional prep work for the decorative finish also has begun. Infrastructure for electrical improvements is ongoing, as well as drainage drop inlet installations, ditch and channel linings and pipe repairs.

Grading for barrier rail and curbs and gutters also is ongoing.

The project requires placement of more than 3,000 tons (2,721.5 t) of plant mix. Plant mix is a mixture of aggregate and asphalt cement or liquid asphalt, prepared in a central or traveling mechanical mixer.

Crews will pave the median ditch south of Cave Rock from the tunnels to the boat launch entrance and will mill and overlay travel lanes near the tunnel extension.

Workers will remove and replace existing road signs near Cave Rock. Also, they will install two new overhead signs, one on each side of Cave Rock, approximately 500 ft. (152.4 m) ahead of each tunnel with flashing orange warning lights and LED messages.

Low lumen LED lights are being added to the left and right sides of the inside of both tunnels. The lighting will offer motorists and bicycle riders guidance through the tunnels and aid in increasing visibility of bicycles as they pass through the tunnels.

During the winter of 2015, heavy rains loosened boulders from the rock face above the U.S. 50 Cave Rock tunnel with some of the boulders reaching the roadway.

Traffic control on U.S. 50 near Cave Rock began in May of this year. Travel speeds are reduced to 25 mi. (40.2 km) per hour and the roadway is reduced to a single lane in both directions.

Both directions of traffic are using the eastbound Cave Rock Tunnel simultaneously. Traffic north of Cave Rock will continue to be reduced to one lane in the eastbound direction with short-duration, westbound one-lane closures to allow for construction of storm water control improvements.

To ensure a safe work zone, the Nevada Department of Transportation has restricted oversize loads from the Cave Rock tunnels for the duration of the summer. The ceiling height through the eastbound tunnel is much lower than on a standard roadway.

Construction-related travel delays have been minimal on average weekdays, but slowing has increased in peak periods like weekends and holidays.

Although the project has been moving along smoothly, lighting for the tunnel site could pose a possible delay. The lighting system specified in the contract documents is no longer manufactured, so a new alternative system had to be found. It will cost an additional $100,000.

The time delay to get the lights in has yet to be determined.