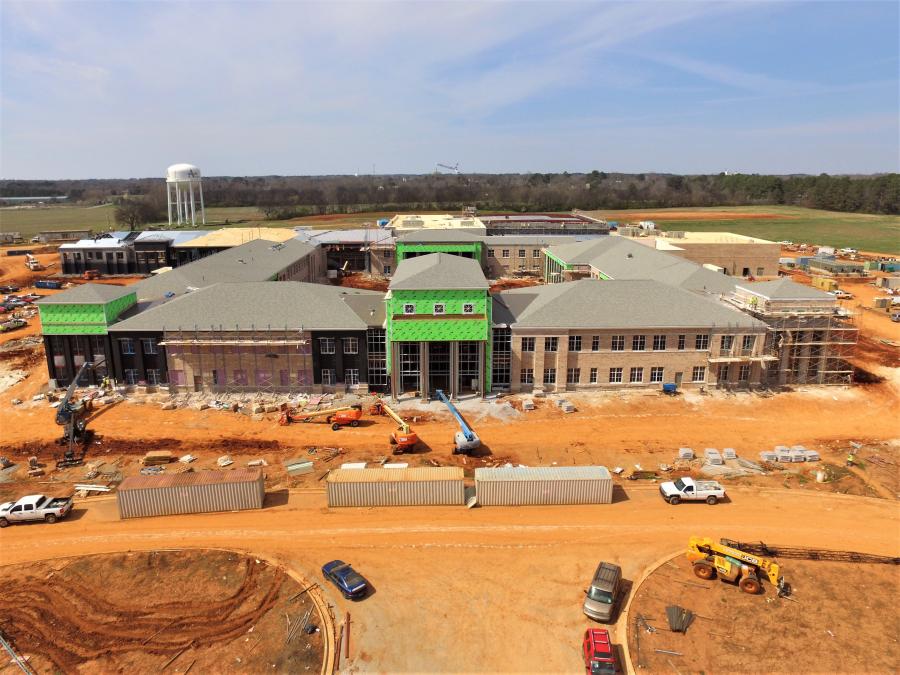 The new Athens High School will spur on a chain of educational facility changes, including a new fourth and fifth-grade specific school.

Described as a premier facility that will serve the area for years to come, the new Athens High School in Athens, Ala., is expected to open on schedule this fall.

The 285,000 sq. ft. project is located on U.S. Highway 31 next to the Board of Education central office building.

“Athens has a long and proud tradition of excellence in education, dating back to 1909,” said Athens City School Superintendent Dr. Trey Holladay. “The new campus is a fitting physical complement that will support the amazing things that happen in our classrooms and community each and every day. It is a source of great pride for our students, teachers, alumni and community.”

A five-year capital plan called for building a new high school and moving the middle school students to the existing high school. The project broke ground in the summer of 2016.

“Although it was one of the hottest days in August, we had a large crowd present to share in the excitement,” said Holladay. “City and state legislators, alumni, parents, our State Board of Education representative, teachers and staff all joined in the celebration. The project is coming together nicely, even though we battled a great deal of rain in April.” 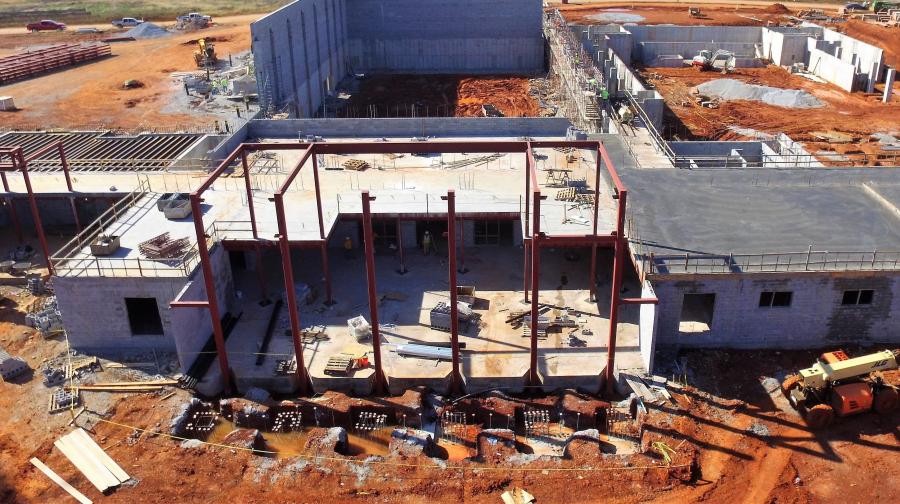 The project, which is nearing completion, is a two-level facility that will offer students modern classroom spaces and updated labs for science, engineering, technology and career technical education programs. Although they are all connected, the school includes the main instructional classroom area with 57 classrooms, a freshman center, competition gymnasium, a practice gymnasium, a 750-seat auditorium, a courtyard with several outdoor classrooms and an underground storm shelter.

Holladay noted that the new high school, one of the largest public projects in the city's history, will be a source of pride for the area.

“The Athens City Council and our Board of Education made this building project come to reality,” said Holladay. “The design of the high school is a visible reminder of the commitment this community has toward education.”

The project is expected to boost economic growth in the area, which has become a hot spot in recent years. Housing demand in the Athens market is reportedly up four percent, and the median sales price has risen 15 percent, according to the Alabama Center for Real Estate.

Construction of the new high school fits into a larger capital plan for the school system.

“Upon my arrival in July of 2013, it became clear that we had some major capital needs within the school system,” said Holladay. “Our middle school is housed in a 75-year-old building, one of our elementary schools is over 60 years old and our other schools were at capacity and needed some updates. When the proposed tax increase did not pass in 2015, we had to devise a plan of attack.

“The high school was necessary for these reasons, as well as in support of the belief that if you do not improve your school system, then you lose your community,” said Holladay. “Our board and many community leaders agree that upgrading the school system is not only vital for future growth, but also necessary to keep young families from moving away to find better physical schools for their children.”

Based on current statistics, now is the ideal time to perform the work.

“Limestone County is the fastest growing county in the state,” said Holladay. “Our enrollment has grown by 49 percent over the past three years. With the recent announcement of the Toyota Mazda plant in Limestone County, more growth is anticipated.”

Discussions surrounding the need for a new high school began in 2013-2014, as demographic studies continued to show growth in the area and in schools. The project is funded from a local bond. The estimated final cost will be close to $59 million.

“Although the tax vote did not pass, our board was committed to getting students out of our existing middle school,” added Holladay. “The school is not ADA compliant and had additional problems. We also had the data supporting the need to prepare for growth at our high school. Working in tandem with our city leaders and officials, the Athens City Board of Education approved a $55 million budget for construction of the new building.

“The Athens City Council approved the 20-year debt service in unison with the board's action to make the project happen. That money is coming from the city's general fund and the school's education fund,” Holladay explained.

The new high school is located across the street and several hundred yards north of the existing schools. The current building will become Athens Middle School in August of 2018. Although still not an easy task, moving teachers and staff is not as challenging as one might think.

“Our high school teachers are leaving everything behind at the current school,” said Holladay. “The only items they will take are personal files and other personal items in their classrooms. New furniture awaits them at the new school. The middle [school] is very much the same way. Other than working to combine the best available classroom furniture, very little is being moved from the current middle school campus.” 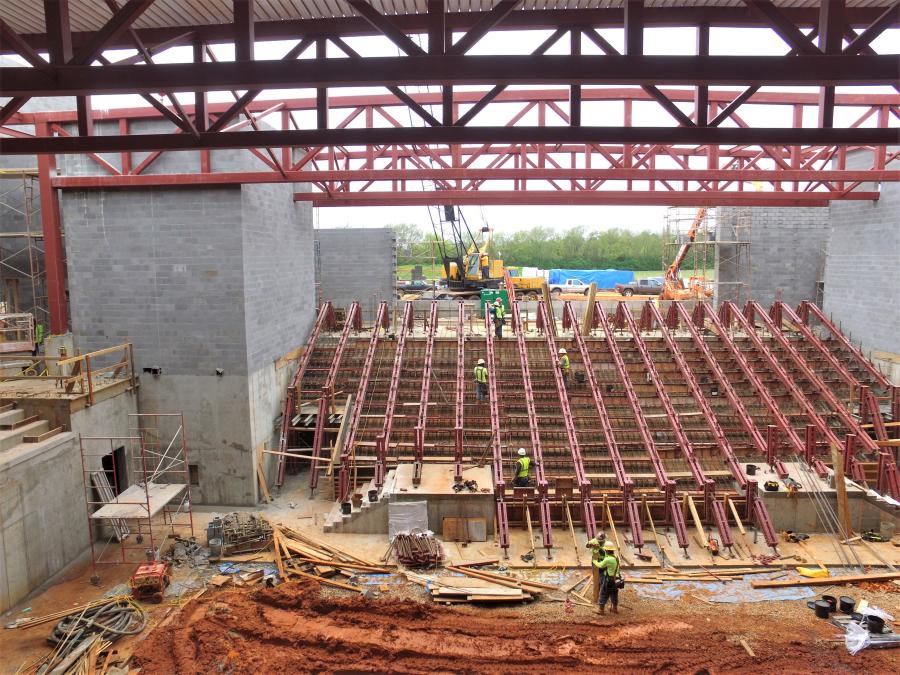 After spending so much time planning the building with the architects, Holladay said seeing everything come together has been rewarding for those involved in the project. The required storm shelter alone is worth the wait.

“This is a very satisfying feature of the new school,” said Holladay. “To not only know we have a safe place for students during school hours, but that we can also serve a need in our community after school hours and on weekends.”

“One that would be a landmark for the city to prepare learners for career and college-ready opportunities beyond high school,” explained Owen. “From the beginning, the district was committed to 21st-century design techniques and applications that were incorporated throughout the school.

“It's a very comprehensive, large project. The school has many stakeholders involved who had input to make it successful. Having the opportunity to create a legacy for the school system meant that a lot of thoughtful planning was in order,” added Owen.

Owen said the history and richness of Athens played into the design and aesthetics of the building.

“We wanted to create a statement with the school to reinforce its importance in the community,” said Owen. “The building is traditional in its style, with hints of contemporary elements. We utilized glass within the courtyard to create interest and natural light into the spaces. 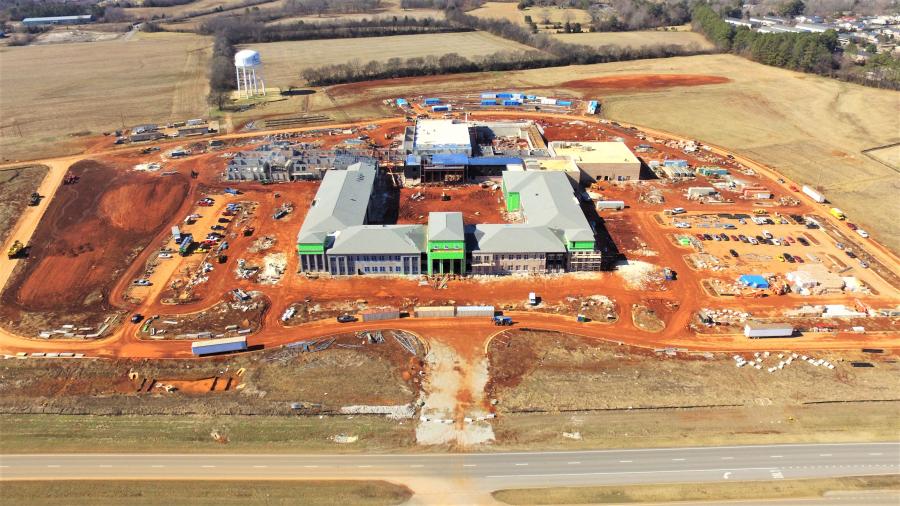 “I'm very excited about the courtyard. The school was designed around an enclosed interior courtyard. This provides outdoor learning opportunities and commons areas for students during the school day. Outside dining will be provided for students, as well,” added Owen.

Concern for the environment also played a key role in the project.

“Also, long lasting, durable materials are a must for schools,” added Owen. “We utilized concrete block for most of the interior of the school. The concrete block helps reduce wear and tear and can be re-painted at a relatively low cost. The flooring is a high grade vinyl tile that is very durable and easy to maintain.”

“The new Athens High School by far is our most notable school project to date,” said Owen. “We are very fortunate and proud to have the opportunity to work with the Athens City Schools.”

According to Dr. Travis Schrimsher, Athens High School principal, “The new high school will be a beacon for the outstanding community that is Athens, Ala. This is an exterior representation of the excellence that has been going on in Athens City Schools for decades. For our teachers, students and myself, it is a structure and a resource of which we can all be proud and excited.”

Paige Hicks is among the Athens High School teachers excited about the change.

“As a graduate of this school, I've always known the high-caliber education available to students,” said Hicks. “Now, our facilities will match the level of teaching that has always gone on inside the building.”

Instructor Kristin Black added, “The new high school ignites a community's longtime hope and imagination for our future. There is something good about seeing both come to fruition.”