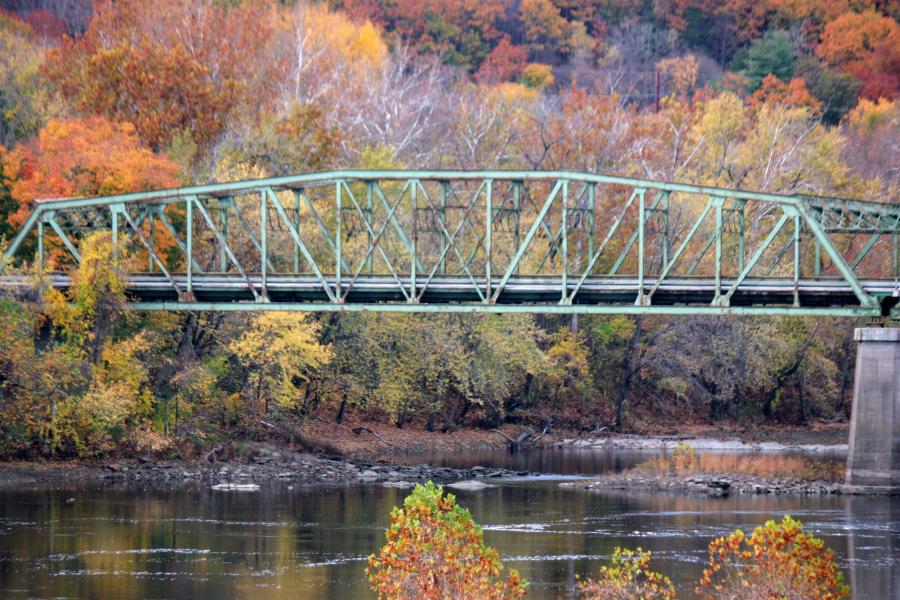 Northern Construction Service LLC, of Weymouth and Palmer, Mass., has contracted with the state Department of Transportation to preserve, renovate and restore a steel-truss road bridge known as the General Pierce that goes over the Connecticut River between Greenfield and Montague.

A crew on top of the deck uses a heavy equipment crane to lower construction materials down to other workers on scaffolding under the bridge, repairing the bottom of the deck.

The 753 ft. long, 25.9 ft. wide bridge with a steel truss design was built in 1947, according to Joe Burek of Northern Construction's bridge crew.

Before the General Pierce there were two previous bridges there, the Montague City Bridge and a trolley bridge. The Montague City Bridge had a wooden, double-decked design that carried rail traffic on top and was 860 ft. long, and the trolley bridge was engineered with a metal through-truss. These two bridges got destroyed in the Flood of 1936. There also is the New York, New Haven & Hartford rail bridge, now known as the Canalside Rail Trail Bridge.

Now the construction crew is saving history, one piece at a time.

It seems just like yesterday that SPS New England, a concrete contractor out of Salisbury, was working on the Turners Falls-Gill bridge back in 2010 to 2014. Come to find out that 1,733-ft. steel deck truss bridge was originally built in the years of 1937 and 1938. Before it was constructed, a ferry known as Bissel's operated a quarter of a mile upriver, and from this site a 550-ft. long bridge known as Red Suspension Bridge was built in 1878. Its piers remain on the river bank.

A 563-ft. long bridge called the Lower Suspension Bridge also got hit by a devastating flood in 1938, and was damaged beyond repair. Engineers used the materials from both for the war effort during World War II. At that time the Civilian Conservation Corps program (CCC) was around, working around the country on road projects, bridges, etc.

Special thanks to local historian Ed Gregory of Greenfield, who grew up in Turners Falls, for sharing local history photos and information, including photos taken of historical bridges, and for campaigning and educating others including the state about the real historical name of the Turners Falls-Gill Bridge, as it has been called since 1938.