The project, within the Lake White State Park (in Pike County), should be completed this November. 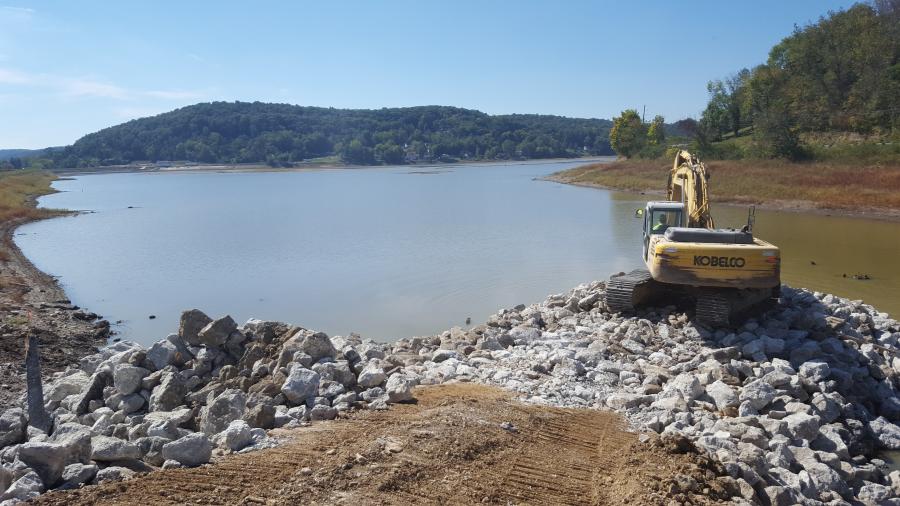 Sunesis Construction started work on the $31.7 million Lake White Dam Rehabilitation and Roadway Improvement Project, the reconstruction of 1 mi. (1.6 km) of State Route 104 (SR 104) that sits atop the dam, last August. The project, within the Lake White State Park (in Pike County), should be completed this November.

ODNR is reconstructing the dam (built in 1935) and making long-term risk reduction improvements to the 4,200-ft. (1,280 m) earthen dam to meet regulatory and safety requirements. The changes are needed prior to restoring the lake level to its normal pool, and crews are replacing the existing bridge over the spillway on SR 104. It also includes improvements to the dam to ensure regulatory and safety requirements; reinforcing the west bank of SR 104; completing the lake drain; armoring the upstream face of the dam with riprap and relocating a portion of Crooked Creek; improving the durability of the Lake White Dam by armoring the downstream face with Roller Compacted Concrete to help protect the dam from impacts of flooding; and improvements to other adjacent roadways and replacing the existing bridge over Pee Pee Creek (also over Lake White Spillway).

ODOT is replacing the existing bridge on SR 104, reconstructing the highway (1 mi., one lane per-direction) by widening SR 104, constructing turn lanes at SR 551 and SR 552, and improving the intersection of SR 104 and County Road 105 (Forest Hills Road).

The traffic management plan is simple as both SR 104 and SR 551 are now closed for approximately 10 months, and SR 552 and CR 105 also will be subject to closure during the project.

Sunesis crews are working throughout the winter to meet the completion schedule.

“Since work began,” said Kathleen Fuller, ODOT's public information officer, District 9, “crews from Sunesis have been busy with the relocation of Crooked Creek and construction of a coffer dam that will be used as part of the lake drain component of the project, as well as reconstruction of the boat ramp and dock near the Lake White park office off SR 551. The next major step is the bridge replacement on SR 104, which is currently under way.”

She said that every effort is being made to minimize the impact of the work for businesses, agricultural activity, and recreational users of the park. Monthly project updates and additional dam risk reduction information is being posted online at www.engineering.ohiodnr.gov.

“As this project has been in some form of development for the last few years, the residents and local community from the Lake White area and nearby Waverly have been aware of it and its need since discussions began, and they have been very supportive,” said Fuller. “They understand the importance of this project for the preservation of not only the state highway system, but also the lake, so the overall response to the work that is being done has been positive. The community is pleased with the cooperation and the inter-agency effort to improve the infrastructure while simultaneously preserving the environment.

“Obviously, closing a route that is a principal artery for residential, commercial and tourist traffic to a popular state park creates a significant impact to everyone,” she said, “so this has been another concern for those who are affected. However, we have a viable traffic plan in place that is working. There is a thru-traffic route, as well as a local detour that provide an efficient means by which motorists can travel. Also, we have a made a few minor adjustments at the point of closure at SR 104 and SR 552, in which the contractors have realigned the junction of these routes for a two-way continuous lane for north and southbound traffic. This change provides a more efficient, safer and easier traffic movement for local traffic to the Lake White community.”

Vaughn Wilson, P.E. deputy director of District 9, said it made sense for both departments to combine their efforts and resources.

“Age and deterioration led to safety deficiencies that included a significant seepage event at the base of the dam and spillway in August 2014,” he said. “This required an emergency response and temporary repairs. The short-term dam risk reduction measures last year included a partial lowering of the 400-acre lake to a level that is approximately eight to 11 feet below winter pool. The lowered lake level is a standard risk reduction measure that reduces the likelihood of seepage through the dam. Long-term improvements are needed for this structure to meet dam safety requirements.”

The project for the dam, one of the oldest in the state, has been in the planning and design stage since 2008. However, this particular project, which combines both the dam reconstruction and roadway improvements, was in active design beginning in 2011.

“This project is a partnership between ODOT and ODNR for the design, construction and construction inspection,” said Wilson, “and ODOT will manage the shared dam risk reduction and roadway improvement projects. The typical lifespan of a bridge of this nature (size, structure type) is, on average, 75 to 100 years. This particular bridge was built in 1935, and a major rehabilitation was undertaken in 1974. Given its age, current condition and factors related to the dam reconstruction, the bridge is in need of a full replacement. Along with the bridge replacement and resurfacing, though, is the reconstruction of the intersections with state routes 551 and 552. By adding turn lanes at these locations, we will be improving access to the state park and the Lake White community for visitors and residents alike.”

The design consultant for this project is Stantec Consulting Services.

The Web page for the project notes that the dam's deficiencies were documented in recent engineering investigations and Ohio Dam Safety Program inspection reports.

“Some examples of the deficiencies include insufficient storage and discharge capacity. Seepage and instability concerns at the concrete spillway and along the earthen embankment, and [an] inoperable lake drain. The Lake White Dam has a Class I potential high hazard rating, meaning a catastrophic failure could cause loss of life,” according to the Web site.

Rob Doyle, Sunesis's director of operations, also is serving as the project manager. The armor protection being installed will protect the dam from washing out in the case of a future over-topping event.

“The lake has been partially drained — low enough to maintain the fish in the lake,” said Doyle. “We dropped the water level by 15 feet below winter pool. We plan to install the armor around April 1 and that should take about six months.”

Preventing debris from falling into the water is a key priority for Sunesis and ODNR.

“The Rip Rap excavation will be dug down in,” said Doyle, “so we have erosion control measures right along the lake along our excavation. It will be placed on geofabric, so there will be no contamination.”

Extensive pre-planning and ongoing dialogue with ODOT and ODNR is ensuring that potential problems have been identified and solutions have been found, and that unexpected problems are dealt with rapidly to remain on schedule.

“It's a team effort and partnership,” said Doyle.

The armoring does not require any adhesive. The roller compacted concrete is installed in two-foot thick layers using a stair step method.

“At times it can be easy to install,” said Doyle. “It's very sophisticated and it has to be done as if it is a well-oiled machine — if not, it can get away from you because the workability time for the RCC is short. Gears Inc., a subcontractor out of Colorado Springs, is manufacturing the RCC on site with its Pug mill. This is the most expensive piece of the work on the project and we'll be using over 100,000 cubic yards of it.”

Sunesis has worked on many dam projects and its personnel have the experience to complete such operations safely and efficiently.

“You have to be well prepared and well planned out because one bad day will adversely affect your operation,” said Doyle. “The armor installation and overall work is repetitive, so we never switch up our guys. When you get into a good routine, that's where you make your best production. Everyone knows the drill and communication is important to address problems that arise and keep the flow going.”

In the meantime, work is progressing on the installation of the new drainage structure, along with piping, for the lake. A coffer dam is being constructed in the middle of the lake that is using 72 ft. (21.9 m) long sheet piling that reach down to the bedrock.

“The coffer dam travels all the way from the lake through the dam,” said Doyle. “We have to open up the dam to install the lake drain piping. We've also had a couple of divers because we have a siphon system that drains the lake and they have to do maintenance on the siphons if debris gets wrapped around the intake. We're not using any barges as we have built work pads to access everything.

“This is a sophisticated operation,” he said. “We have relocated the creek that flowed into the downstream side of the dam where the spillway comes through. It was approximately 50,000 cubic yards of excavation. We also demolished the bridge on SR 104 overtop the spillway and are in the process of rebuilding it; and we're also installing a retaining wall on the backside of the dam that is approximately 300 feet long, which is driven sheet piling that gets encapsulated with concrete.”

Ice is not a major problem for the crews — it is the water levels that are a constant concern.

“The water fluctuates so much in both the lake and on the backside of the dam as the spillway drains into a creek which is fed by a river,” said Doyle, “and we still have all the drainage area coming into the lake. At this time of year, if we get a two-inch rain or more, it will bring the lake up by 10 or 12 feet in matter of four to five hours. To deal with this contingency, we have seven 18-inch siphons that siphon the water out of the lake through gravity.”

The asphalt-paved road will be replaced with a 9-in. (22.8 cm) thick concrete pavement, one that should have a lifespan of 50 plus years, after the armoring work is completed.

The amount of new materials to be used is still being determined.

The day shifts currently have nearly 28 workers from Sunesis and as of April 1, the number will double with the subcontractors

The company's main yard is 90 mi. away, but one of its field mechanics lives only 15 mi. from the work site and he visits it about twice a week to do wear and tear repairs for hoses and tire punctures, as well as routine maintenance and breakdowns.

Vehicles and equipment are thoroughly inspected prior to being shipped to a work site.

Winter conditions have a minimal impact on the equipment.

“If it is going to be less than 15 degrees, we typically tend not to work,” said Doyle, “but the schedule is tight on this project and we've worked just about every day, except on Sundays. When it is 0 degrees outside, everything is fired up and we leave it running for the day. There are no real issues.”

New equipment is purchased from local dealerships in Ohio, including Southeastern Equipment Company in Monroe, Ohio CAT in Sharonville and Rudd Equipment, also in Sharonville.

“We also go to auctions in Florida and tri-state auctions around here,” said Doyle.

Looking ahead to the armor installation, Doyle said, “We need to make it to the spring and not get flooded out. The water can come up fast and as long as we have a somewhat dry spring, we should be able to complete the project on time.”