The Governor’s Safety Excellence Award is presented each year to the ODOT field division with the best overall safety record in the past year. 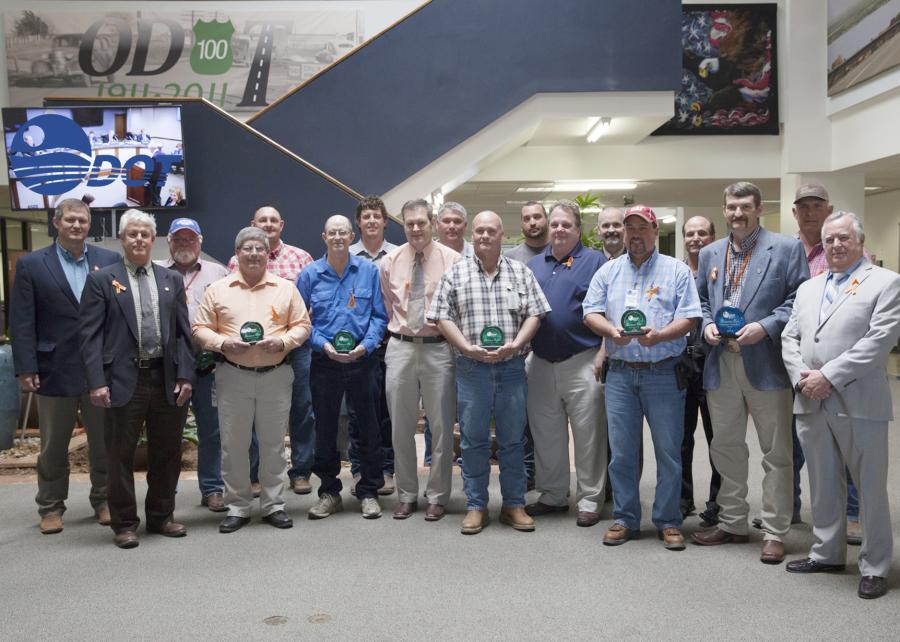 Oklahoma Department of Transportation field divisions and crews were recognized for good safety records at the April 4 meeting of the Oklahoma Transportation Commission. They wore orange ribbons in honor of the 59 ODOT workers who have died in the line of duty and to remind everyone to practice safe driving in highway work zones.

Whether it's patching sections of pavement, repairing bridge damage, inspecting construction work, clearing snow and ice, mowing highway right-of-way or maintaining heavy equipment, the job is never done for the Oklahoma Department of Transportation. The men and women of ODOT work in all conditions and put their lives on the line to construct, maintain and repair the state's highways, interstates and bridges. Safety is the No. 1 priority for ODOT and the agency conducts onsite reviews, accident follow-up, ongoing safety education as part of its worker safety program.

At their April 4 meeting, members of the Oklahoma Transportation Commission and Mike Patterson, ODOT executive director, recognized the crews who demonstrated a continued commitment to safety in the past year. The total number of employee injury accidents has declined more than 60 percent in the past decade.

The Governor's Safety Excellence Award is presented each year to the ODOT field division with the best overall safety record in the past year. The 2015 award went to Division Three, which increased its safety performance record by 97 percent compared to the previous year. Total accidents, accident severity and lost work days are all taken into consideration in determining the Governor's Safety Award winner. Division Three is headquartered in Ada and led by Kevin Bloss, division engineer. The division includes Cleveland, Coal, Garvin, Hughes, Johnston, Lincoln, McClain, Okfuskee, Pontotoc, Pottawatomie and Seminole counties.

The Progressive Excellence Award recognizes the ODOT field division with the most improved safety rating. The award for 2015 was presented to Division Two, which is headquartered in Antlers under the leadership of Anthony Echelle, division engineer. The division improved its safety performance 96 percent from last year. Division Two includes Atoka, Bryan, Choctaw, Latimer, LeFlore, Marshall, McCurtain, Pushmataha and Pittsburg counties.

The Director's Safety Awards are presented to the unit in each of ODOT's eight field divisions and its Oklahoma City headquarters with the best safety record. The winners for 2015 are: