ODOT Works to Rebuild I-76 Interchange in Akron, Ohio 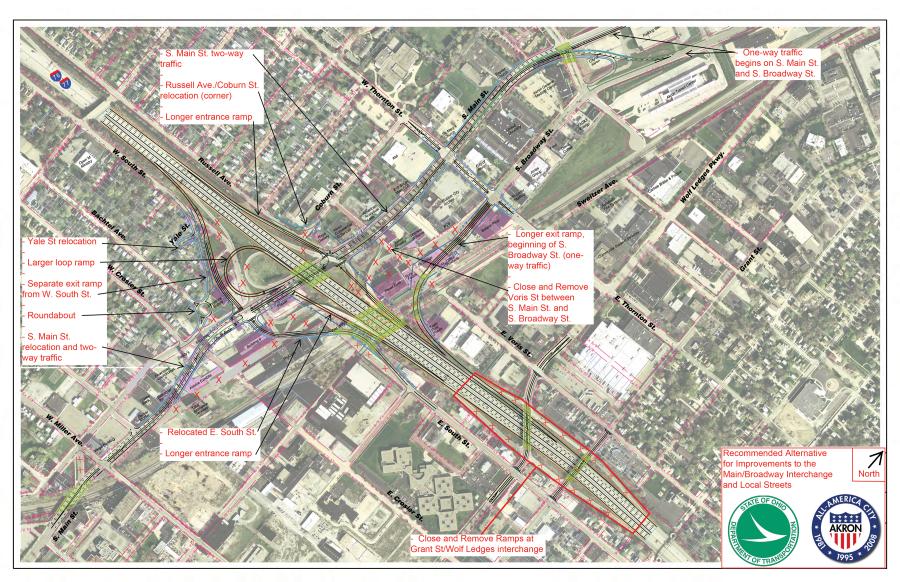 The Ohio Department of Transportation (ODOT) is currently working towards rebuilding the I-76 interchange with South Main Street and South Broadway in Akron, Ohio. The overall $149 million project involves removing the interchanges at Wolf Ledges Parkway and Grant Street. The work, which reportedly already began with the razing of buildings in the area to prepare for the roadway, is expected to be completed in October 2019.

The total construction cost of the project, which is in Summit County, is $97.6 million.

A minimum of one lane of traffic in each direction will be maintained on I-76 during non-peak travel times, and various side street closures will occur. Wolf Ledges Parkway will be closed for 180 days. Grant Street will also close for 180 days, but these closures two closures will not occur at the same time.

According to an ODOT repot, the Main/Broadway Interchange is a vital transportation element in Akron, connecting people to the various assets in the downtown area, including businesses, government agencies, and the University of Akron The current interchange configuration is not ideal due to various existing conditions, including poor geometry.

Officials have reported that this area has the fifth highest crash reports in the state.

“This work will reinvent the gateway into Downtown Akron, make it safer and serve the needs of the community,” said Allen Biehl, ODOT's District 4 deputy director.

According to Brent Kovacs, public information officer of ODOT's District 4, the main work for the remainder of the year is a bridge replacement over the interstate starting in early August. The bulk of the work will begin in 2017 on Main/Broadway. The work on the interstate is scheduled to begin in late 2017 and early 2018. The pre-construction meeting has not yet been held.

Based on the ecological field studies completed for the Main/Broadway Interchange corridor, the project lies within a dense urban area in the city of Akron. Remnant natural areas are few in this urban landscape. Land use in the area is a mix of dense urban uses, including housing, commercial, transportation and light industrial. No areas or species of ecological importance were found within the project study area.