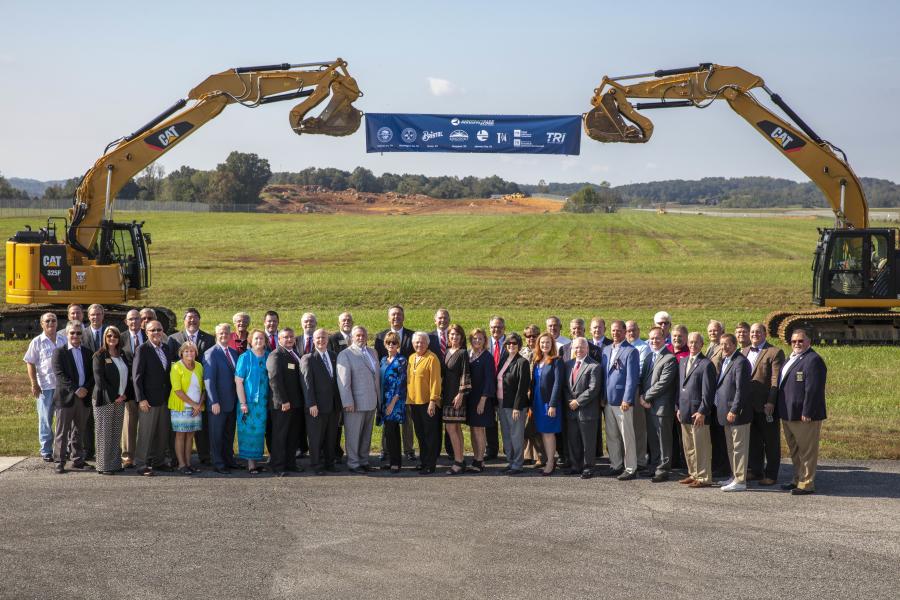 Representatives of the Tri-Cities Airport Authority; the cities of Bristol, Kingsport and Johnson, Tenn.; and Sullivan and Washington counties, Tenn., as well as state of Tennessee officials, celebrate the next phase of development for Aerospace Park Oct. 3 in Blounstville, Tenn.

Community leaders and construction vehicles were on site Oct. 4 at Tri-Cities Airport in Blountville, Tenn., setting the stage for the next phase of Aerospace Park site development.

Aerospace Park already offers 32 acres ready for development. The completion of each phase of Aerospace Park development has offered additional promotional benefits and recognition for the site.

“Aerospace Park would not be in this stage of development if it were not for the support of our funding partners,” said Tri-Cities Airport Authority Chairman Jon Smith. “It has been an honor to be a part of the cities and counties coming together on this significant, regional economic development project.”

“The support from our community partners has been very important as we sought additional funding to complete the site,” said Wilson. “The Airport Authority has received grant funding from the Tennessee Department of Transportation, the Tennessee Department of Economic and Community Development, and TVA. We appreciate each of these funding partners as we continue to move Aerospace Park forward.”

The TCAA will be competing for approximately $1.7 million in grant funding for the final phase of site construction, which will include grading completion of 17 acres and the addition of utilities and access roads. Once the total site is complete, TCAA will seek certification of the 122-acre site through the Tennessee Department of Economic and Community Development's Select Tennessee Site program.

Site completion and certification will bolster Aerospace Park marketing efforts, according to Mark Canty, TCAA director of trade and business development. “Expanding the footprint of the current certified acreage of Aerospace Park will allow us to more effectively promote the site, compete for large projects, and increase our ability to bring quality jobs to Northeast Tennessee,” said Canty.

According to Canty, aircraft manufacturing and MRO operations are projected to experience significant growth over the coming decade, and recent trends have seen a high percentage of domestic growth occurring in the southeastern United States.