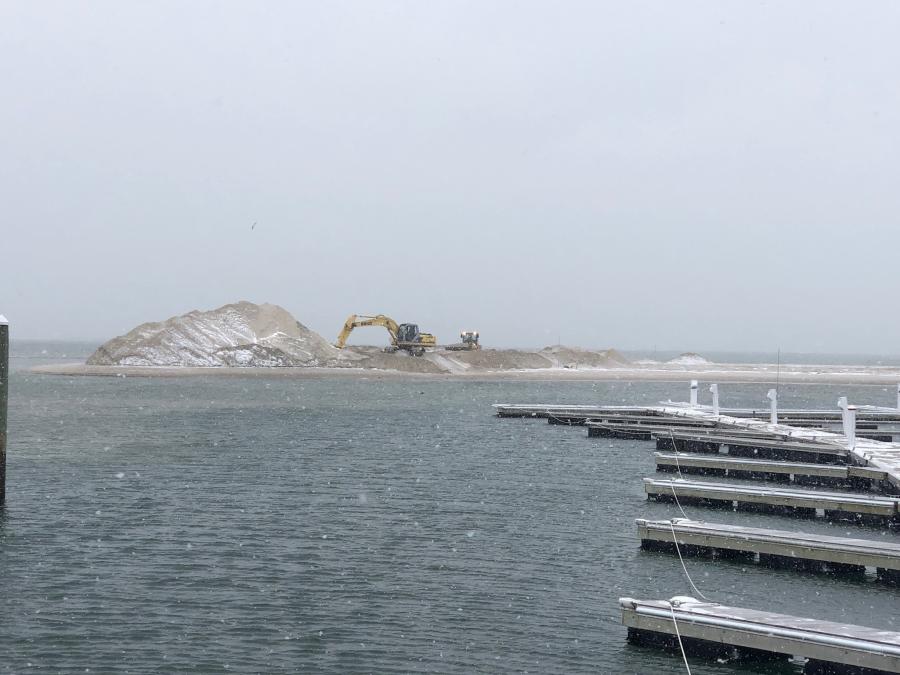 The dredging, which removed and relocated some 30,000 cu. yds. of sand, unearthed old mooring anchors and chains, which are being cleaned up and will be re-used.

Chatham, Mass.-based Outermost Harbor Marine (OHM) essentially self-performed a nearly $500,000 dredging operation to open a channel at its marina in Cape Cod's Chatham Harbor, a project that started on Jan. 29 of this year and was completed on March 29.

The dredge operations pumped out more than 30,000 cu. yds. of sand that was re-used to repair nearby beaches and construct several dunes to assist in flood control issues.

The goal of the project was to dredge an entrance channel that led directly to the ocean, which is on average 80 ft. wide (120 ft. at its maximum with the slide-slopes) and 1,500 ft. long. The area was dredged to 5 ft. deep at low tide. 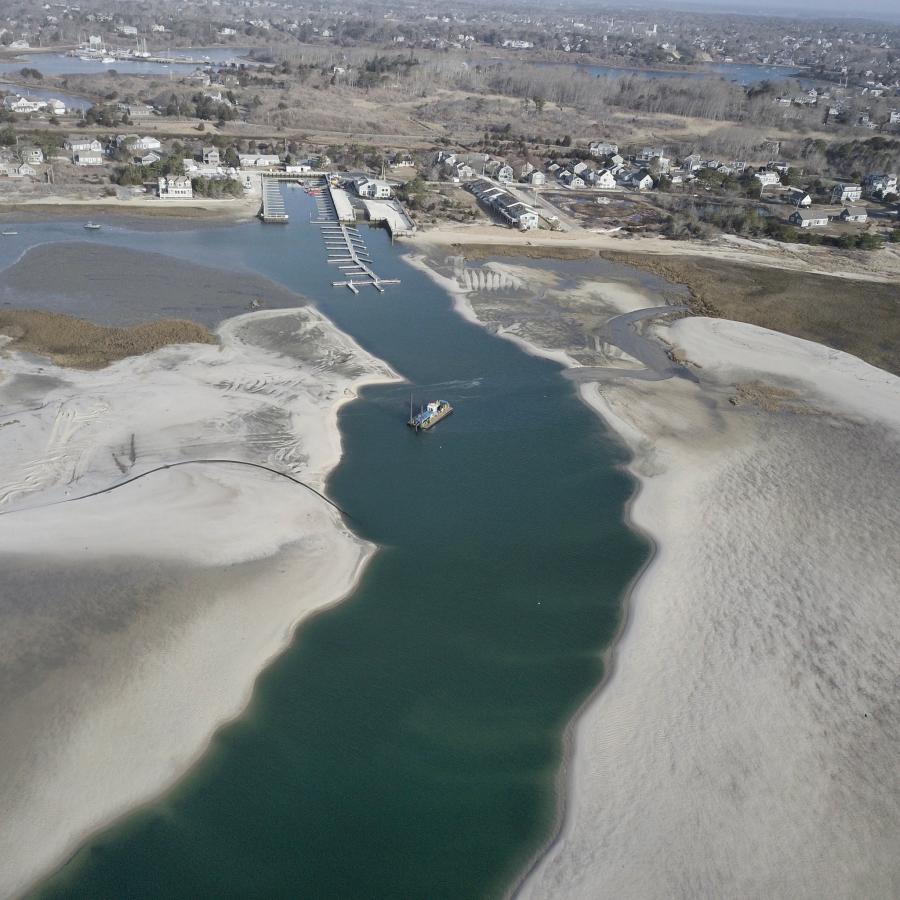 "Prior to the work, the channel, basically, was not navigable," said Harrison Kahn, a co-owner of OHM along with his brother, Devin Kahn, which they purchased six years ago. "Boats could only get out at limited times during the tide schedule. Last year, we attempted to dredge the channel by purchasing a smaller dredge from GeoForm International Inc. — a Dino6 hydraulic dredge with a cutterhead mechanism. Also, our permit was restricted to two weeks. It was basically impossible to complete the job with the little dredge within the timespan — we did dig a small channel that provided limited use for our summer. This year was our year to get it completely open. The last time the channel was dredged to this scale was some 40 years ago, when the harbor was built."

The smaller dredge, with its 6-ft. wide cutterhead, could only progress in straight lines and make 6-ft. cuts at a time.

The maximum length of the boats using the marina now is 60 ft., with most powered by outboard engines, which are perfect for navigating the inter-coastal waters in the Chatham area, and for trips to Nantucket, Martha's Vineyard and fishing.

"Our marina is the most centrally located in Chatham," said Kahn. "The break in the outer beach in front of the marina posed problems for us originally because current from the break was pushing sand into us. Now that the channel has been dredged, it's great for boaters because they can go straight from the ocean up to Pleasant Bay and Stage Harbor."

The improvement project was essential for OHM, which can handle up to 200 boats in the summer with a capacity to store 600 boats during the winter months.

When the Kahn brothers purchased the marina, they worked hard to retain the permitting for dredging operations.

"We were good for the first four years and then the sand started to come in at a much larger scale and filled in the channel," said Kahn. "It was much more of an area than we could manage — it was unpredictable. With the way that the permit was set up originally, it only gave us a two-week window because of the time-of-year restrictions for the protection of shorebirds, horseshoe crabs and other species. Luckily, last year, I was able to amend our permits, explaining that this was a completely different area now and that it had been shoaled in. The various state and town agencies gave us the ability to open our channel by giving us additional time to complete the work we did this year." 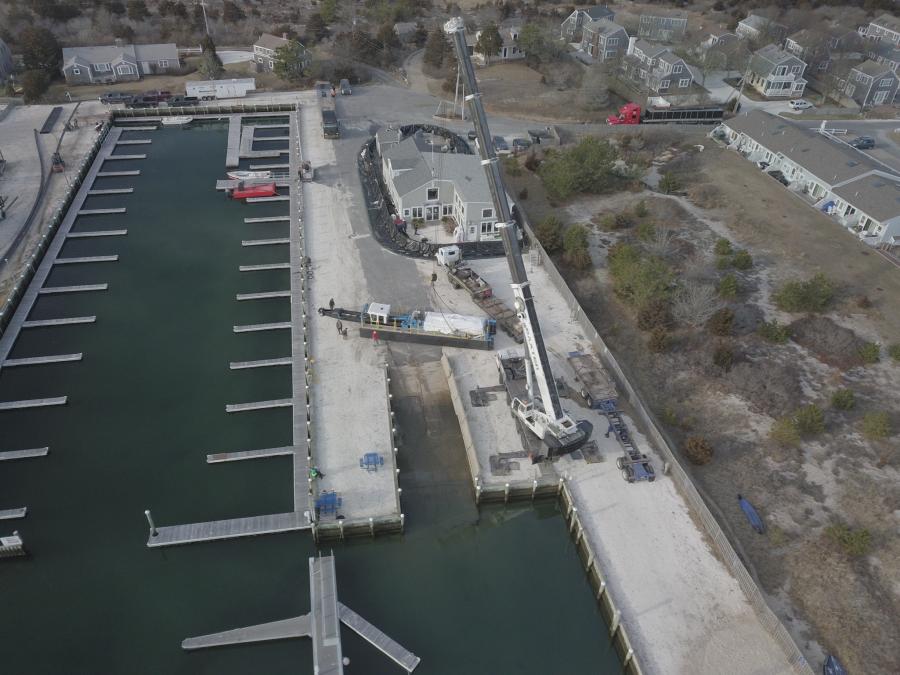 OHM designed the project in-house. The dredging operation required cutting straight through a sand berm where the original channel was located.

"It was a huge headache dealing with all the permitting issues and regulations," said Kahn, "but once we obtained the right equipment — a large excavator, a larger dredge, a couple of loaders and dozers to remove the material, we were able to move the sand and ended up having a significant impact on nearby Quitnessett Beach where we placed the dredged materials, which used to be overtopped by local storms and Nor'easters.

"These overflows from the storms affected flooding issues near the causeway by our marina, a local road called Morris Island, owned by the town that connects to several major residential communities in Chatham," he added. "When we built up the beach by six to seven feet, we ended up protecting it and the roadway. The outer beaches in front of our marina are shifting southwards, which will also additionally protect the roadways. Hopefully, we won't have to do any major dredging for quite a while."

"We dredged the channel for two months straight, 24 hours a day," said Kahn. "This model dredge gave us the capability to dredge larger areas with fewer swipes than our owned dredge."

The dredge arrived on Jan. 26 [2020] and was set up in a few days. During the weekdays, it operated via three eight-hour shifts and two 12-hour shifts on weekends.

"My brother and I oversaw the entire project," said Kahn, "so we put in some pretty crazy hours. Unfortunately, we not only had to deal with normal dredging matters, but mechanically we were maintaining the equipment constantly."

The dredging, which removed and relocated some 30,000 cu. yds. of sand, unearthed old mooring anchors and chains, which are being cleaned up and will be re-used. 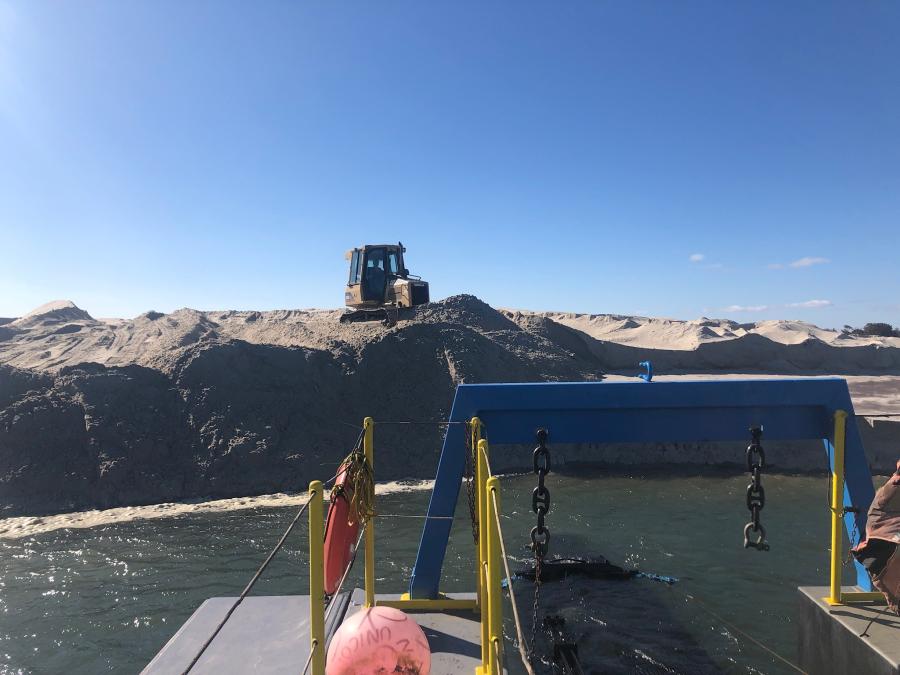 "The project was more than we estimated," said Devin Kahn. "All the sand being reused on the beaches made all the homeowners and beachers using the beach ‘happy campers.' It's also been great for local environmentalists because the sand was used to create shorebird habitat, particularly for the piping plover, an endangered shorebird that lives in the area. It is perfect for them."

Because the original deposit beach wasn't large enough to handle all the sand, quite a bit of it was pumped further down Quitnessett Beach toward some of the homes south of the wildlife preserve, about 3,000 ft. from the channel.

The sand was spread along the beach using an excavator and a dozer.

A small hitch occurred on the morning of February 8 when a containment area, where sand water was pumped into, experienced a small breach when a dozer slid through it when pushing sand inside it. An extreme high tide weakened the sand, making it less stable.

"When the material was pumped into the pond, certain places can become less stable — the sand below the water can become very soft," said Kahn.

Crews drained the water, removing the dozer with the help of an excavator.

OHM appreciated the efforts of its employees.

"All of my staff did a great job," said Harrison Kahn. "The hours on these jobs are hell — long and erratic, and it was rough work. It was not work they were used to — freezing cold, harsh winds and the long hours. We could not have done it without them."

The Kahn brothers want to acknowledge and appreciated the help of Jeff Campbell, the owner of Seaboard Geotechnical & Environmental Drilling Services Chicopee, Mass. — a local homeowner and a longtime customer of Outermost Harbor. 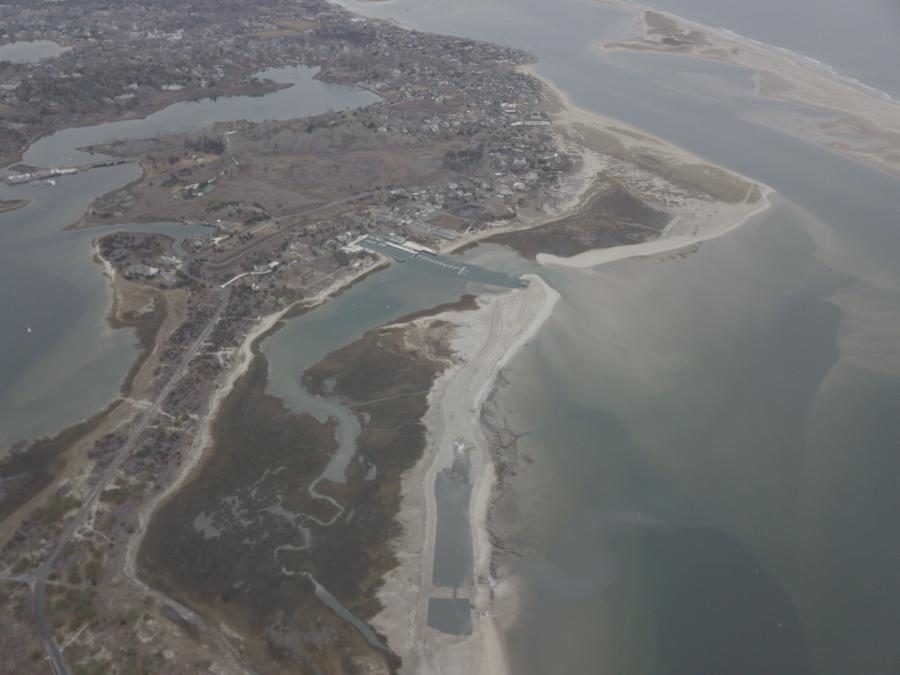 "There were a number of other subcontractors who also assisted — we also thank them," said Harrison Kahn. "Outermost Harbor's channel improvement has caused so many new customers to move their boats to the marina to the point where there are only a few spaces still open."

Equipment-wise, OHM started out with a Cat loader that was rented for a week and a Komatsu excavator.

"We weren't moving as much material as we needed with that, so replaced the loader with a Cat D5 dozer," said Harrison Kahn. "That was working great, but we needed something bigger and ended up going to a D6. Eventually we found the right combination."

The dredge experienced some wear and tear issues.

"The salt water was hard on everything," said Kahn. "The sand was also abrasive on all of the pumps and metal parts that were touched by it. Parts needed to be replaced frequently, including the cables. We were lucky that we didn't have any problems with the excavators and dozers due to the salt water environment."

The Komatsu excavator was rented from a local ready-mix company and the Cat dozers and loader from Milton CAT. CEG