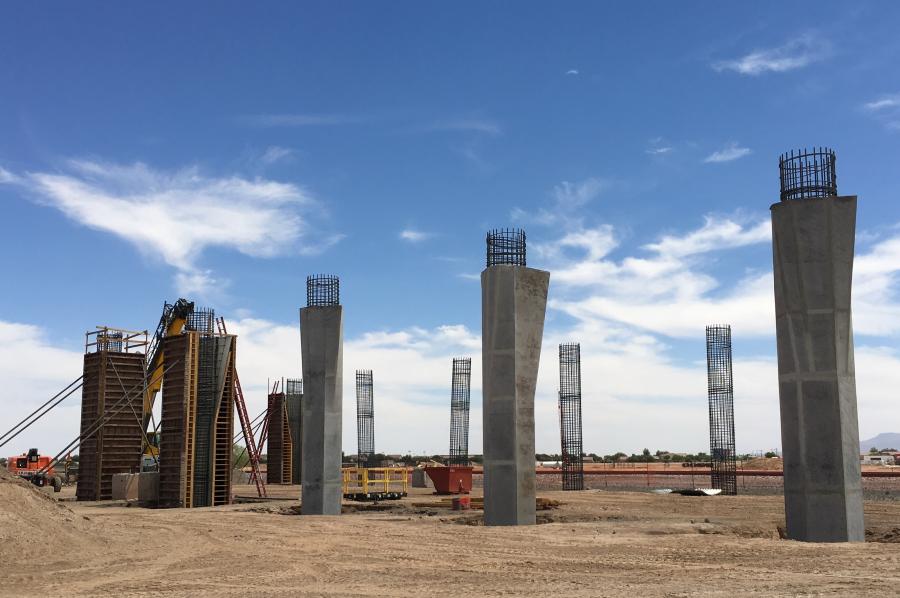 A $55 million project in Maricopa, Ariz., is under way, following an extensive traffic and accessibility study. SR 347 is the city's main transportation corridor through the community, serving as a regional connector to major employment and recreation areas. Traffic averages more than 31,000 vehicles per day and future (2040) projections of double that amount sparked a study to improve access and capacity.

The Arizona Department of Transportation (ADOT), in conjunction with Federal Highway Administration (FHWA) and the city of Maricopa evaluated a total of 10 alternatives which would provide improvements to access, capacity and traffic operations through 2040. The study also considered a future grade separation (bridge) to replace the existing at-grade intersection of SR 347 at the Union Pacific Railroad (UPRR) track. Following a public hearing and environmental assessment, Alternative H was selected.

Just south of the Maricopa-Casa Grande Highway, SR 347 crosses the existing UPRR where there are currently 40 to 60 trains per day; the UPRR has plans to expand service, which would increase train traffic upwards of 100 trains per day. Additionally, the Amtrak station is located just west of the intersection and vehicular traffic is routinely delayed for its passenger operations.

The two-year project aims to free Maricopa commuters from long waits as trains cross busy SR 347 in the central part of the city. The project also includes an overpass connecting southbound SR 347 to Maricopa-Casa Grande Highway, and a new route for northbound drivers on Maricopa-Casa Grande Highway. ADOT received a $15 million Transportation Investment Generating Economic Recovery (TIGER) grant to cover a portion of the cost, and the city of Maricopa is contributing nearly $14 million.

“By enhancing mobility and safety, this project and the partnership that made it a reality will improve the quality of life in Maricopa and the region,” said John Halikowski, ADOT director.

Maricopa officials held a groundbreaking event in November 2017 and ground work began in March of this year with ADOT crews clearing vacant homes acquired for the project along Maricopa-Casa Grande Highway. Ames Construction of Scottsdale is the prime contractor.

“This marks the culmination of 14 years of work and fiscal prudence,” Maricopa Mayor Christian Price said. “This crucial infrastructure project has been one of our biggest hurdles to growth and safety. We now begin a new chapter and look forward to working with ADOT to build our overpass.”

SR 347 will have a new alignment just east of the current highway, a move that will allow most of the work to be accomplished without restricting highway traffic. The bridge is being constructed at Desert Cedars Drive and connecting with the current alignment north of Honeycutt Road. Northbound drivers on Maricopa-Casa Grande Highway will travel north on an alignment near the current Fourth Street and turn west at Honeycutt before connecting with SR 347. The project is on track to finish as scheduled by late 2019.