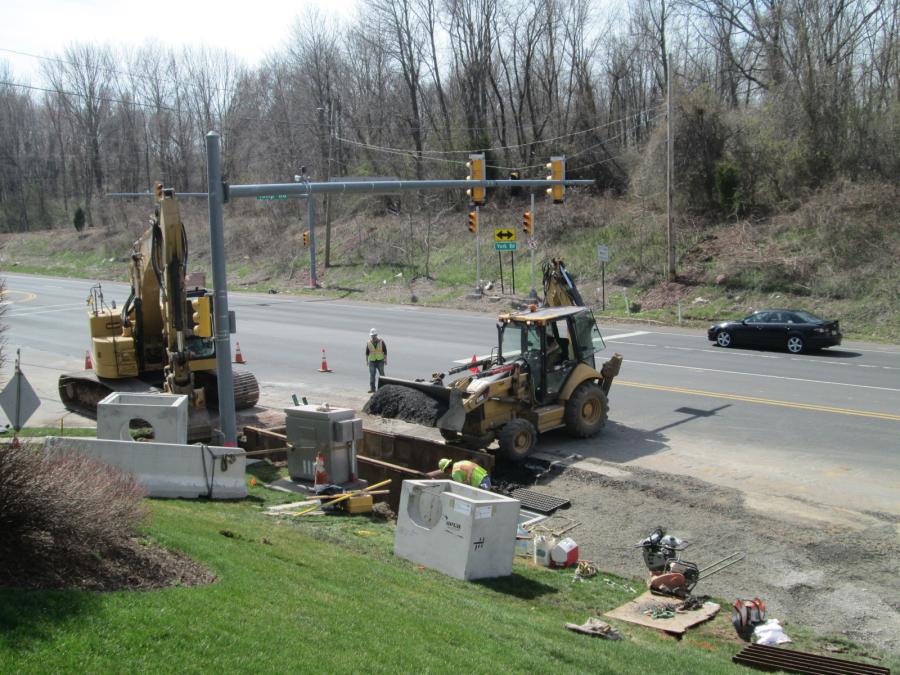 PennDOT photo. The Pennsylvania Department of Transportation (PennDOT) is performing construction on a $31,571,380 project to reconstruct and improve 4 mi. (6.43 km) of Route 263 (York Road) between Bristol Road and Sugar Bottom Road in Warwick and Warminster townships, Bucks County.

The Pennsylvania Department of Transportation (PennDOT) is performing construction on a $31,571,380 project to reconstruct and improve 4 mi. (6.43 km) of Route 263 (York Road) between Bristol Road and Sugar Bottom Road in Warwick and Warminster townships, Bucks County.

Crews from J.D. Eckman Inc. (JDE), of Atglen, Pa., began construction in January 2014. The contractor is halfway through the PennDOT project, which is 100-percent federally funded. The project, which is replacing a concrete road built in the late 1960s, is expected to be complete in October 2017.

“We're rebuilding Route 263 to provide a smoother and safer roadway for motorists to travel on for decades to come,” said Charles Metzger, PennDOT's community relations coordinator. “The concrete road is in need of total reconstruction and the surface is well past its life expectancy.”

“We're removing and replacing the entire concrete roadway,” Metzger added. “The new road base should have a 50-year lifespan. One of the biggest challenges was the relocation of utility lines. We've been working with Warwick Township, where the majority of the work is taking place, to redo their drainage system by installing new storm inlets and water mains. The bulk of the utility work has been completed.”

In addition to building a new roadway, this transportation improvement project will help to reduce congestion and improve travel times for commuters and commercial traffic by upgrading traffic signals and intersections.

Turn lanes also will be lengthened or added at Route 263's intersections with Bristol Road, Meyer Way and Almshouse Road, and a new traffic signal will be installed at Deer Run Drive. In addition, side road approaches at the existing signalized intersections will have new curb ramps installed.

The affected area of roadwork on Route 263 carries 25,000 vehicles daily.

Metzger stressed the need for this construction.

“This is a residential area that is not as heavily populated as other parts of Bucks County,” he said. “There is some new residential development going on along Route 263, but the primary focus of this project is to rehabilitate and improve an aging, deteriorated roadway. We worked with the local municipalities to coordinate and advance the project.”

The plan has J.D. Eckman crews splitting the work into two phases — from Sugar Bottom Road to Meyer's Way (Phase One) and between Myer's Way and Bristol Road (Phase Two).

“In May, we moved to the second and final phase of construction,” said Metzger.

“There are a few small businesses along the road,” said Mike DiBello, PennDOT's resident engineer of the project, “but the area is mostly rural and residential. The work method has caused some traffic issues since Route 263 is restricted to one lane in each direction through the construction area. We've had back-ups, but drivers are getting through.”

DiBello noted that PennDOT and J.D. Eckman have a “very good” working relationship.

“We're working together to move the project forward,” he said. “If we face a minor problem, it's fixed almost immediately. A more significant issue may take a bit longer because it sometimes requires design and engineering work to resolve it. We work collaboratively to overcome issues that we encounter.”

DiBello said the contractor initially relocated most of the utility lines before starting the roadwork, but crews did come across lines that were not shown on the plans, lines that the utility companies didn't know about. The first year of the project was spent moving utilities owned by PECO Energy, Verizon, Comcast and AT&T. Some low wires remain to be set in place.

He added that said construction crews are gearing back up with the onset of spring.

“The contractor did work through the winter, but there are certain warm-weather, high productivity operations that can't be done during this time, such as paving. Fortunately, we did have a relatively warm winter and crews were able to complete more work than they would normally have.

“Paving on Route 263 is done at night, but work also is done during the day to prepare the road for its eventual resurfacing,” DiBello said. “Paving at night saves time and we always seek to maximize our work hours to stay on schedule.”

To accelerate the demolition of the concrete road, J.D. Eckman switched from using a hydraulic pavement breaker, which basically dropped a heavy weight onto the concrete repeatedly to break it up into smaller chunks, and brought in a sonic machine from Resonant Machines Inc. of Oklahoma. This rubblization machine uses resonant beam technology to rubblize the existing concrete into small stones and powder. This technique makes it much easier for the general contractor to load and haul away the existing concrete than just using a hydraulic pavement breaker.

“The first method worked, but it was slow,” said DiBello. “So the contractor switched gears and brought in the sonar equipment that moves down the road delivering sonic waves to break up the concrete into smaller pieces very quickly, at least one-quarter of the time as compared to the traditional method.”

The structures being improved under this project are the bridge crossing Neshaminy Creek, which is 248 ft. (75.6 m) long with three spans, and a smaller bridge over Little Neshaminy Creek and Creek Road that is 214 ft. (65 m) long.

“The contractor is upgrading both bridges by repairing the substructures, including the beams and doing some minor work on the road surfaces and concrete approach slabs,” said DiBello.

DiBello has seven PennDOT associates on-site, including two newer employees who are benefitting from the experience of a seasoned staff.

“I'm not surprised by anything on this project — it's pretty much going as expected,” he said. “When you're excavating and rebuilding a road, you start finding things, but we haven't found any hazardous materials or anything particularly unusual. Most of my staff are veterans who have worked on large projects and they have a keen eye for detail. By bringing the sonar equipment on board, the contractor helped advance the project. We're moving forward in a collaborative, positive way.”