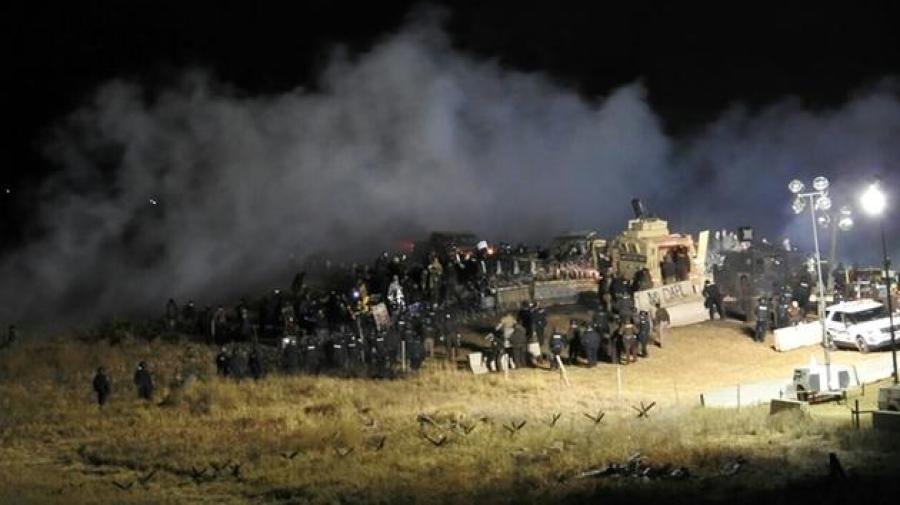 Reopening a bridge near the main Dakota Access pipeline protest encampment is key to restoring better relations between the state and the Standing Rock Sioux tribe, according to North Dakota's now-former governor and the tribal chairman, but the effort will take weeks if not months.

The bridge, unofficially called the Backwater Bridge, has been closed since late October, when protesters of the four-state, $3.8 billion pipeline blocked the bridge with burning vehicles, damaging the structure. It's also the site of several clashes, including on Nov. 20, when authorities used tear gas, rubber bullets and water sprays on protesters who they say assaulted officers with rocks and burning logs.

The state Transportation Department has said they can't inspect the bridge until they know their workers will be safe, though pipeline opponents believe the closure is meant to block the north end of the federal land, where hundreds of protesters are camped out.

Before he left office Dec. 15, Gov. Jack Dalrymple met with Tribal Chairman Dave Archambault, agreeing to enlist the Bureau of Indian Affairs to help ensure the safety of inspectors so that the bridge can reopen.

Dalrymple in a statement said reopening the bridge “will be a strong signal of cooperation to return area living conditions to a more normal state,' while Archambault told The Associated Press that doing so removes a roadblock to emergency services and commerce. The bridge, on state Highway 1806, is the main route to get to the tribe's casino.

“If there's a way that we can help so that this bridge is opened, it's a step forward,' Archambault said.

A timeline hasn't been finalized, but Transportation Department spokeswoman Jamie Olson indicates it will be a slow process, with testing of the bridge being done “in the next few weeks.'

Core sampling to evaluate the concrete requires temperatures around the freezing mark for machines to work properly, she said, and the state has been blanketed by frigid arctic air for weeks.

“Special equipment will need to be brought to the bridge site and may require a shelter or structure to be placed on the bridge in order for an adequate testing environment,' she said, adding that the samples will be sent to a special lab.

The highway itself also has been damaged and will need to be repaired before the roadway can be opened, Olson said.

With the protest camp thinning out to a few hundred people due to the stalled pipeline work and harsh winter weather, officers have moved back from the bridge to de-escalate tensions but are monitoring it from afar and will respond if protesters try to cross a blockade of cement barrier and razor wire, Morton County sheriff's spokesman Rob Keller said.

The pipeline that is to carry North Dakota oil 1,200 mi. to Illinois is stalled while Texas-based developer Energy Transfer Partners and the Army battle in federal court over permission for the pipeline to cross under the Missouri River. The Standing Rock Sioux and its supporters say the pipeline threatens cultural sites and drinking water; ETP says the pipeline will be safe. -AP