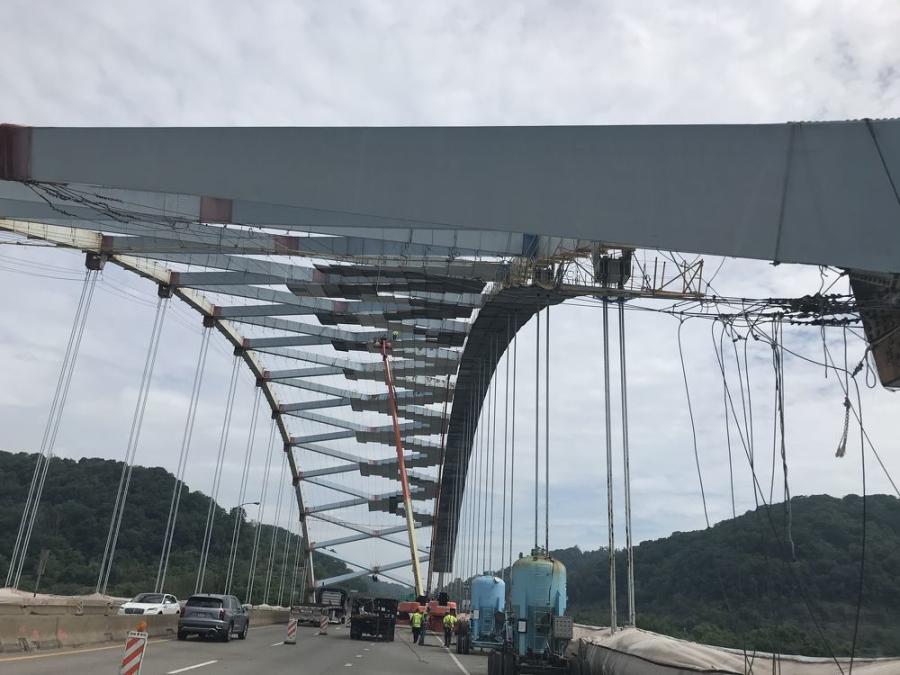 The bridge first opened in 1976 after five years of construction. It was reportedly the last link to finish the 180-mi. long I-79.

The bridge is located in Neville Township, Robinson Township and Glenfield Borough and crosses the Ohio River and Neville Island. 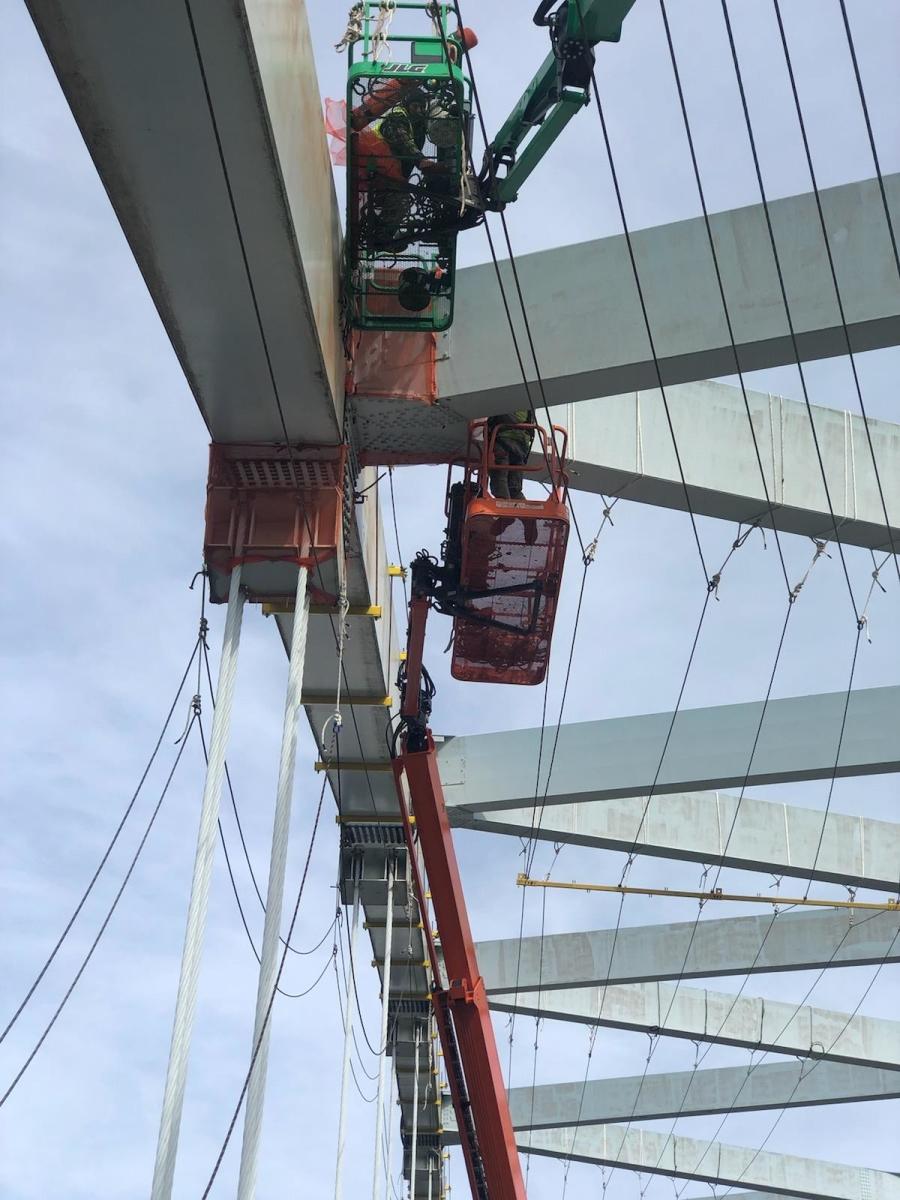 According to Steve Cowan, PennDOT press officer, federal funding was provided for the $42 million project, which began in August 2020, with completion expected by June 2023.

The contract was awarded to Trumbull Corporation, under the direction of Rob Opel.

The bridge first opened in 1976 after five years of construction. It was reportedly the last link to finish the 180-mi. long I-79. It also is the second longest single spanning bridge in Allegheny County.

"It's essentially what I would call … I'd say it's somewhere between a bridge preservation and a bridge rehabilitation project," he said. "It's a little bit unique in that respect. It's more like a rehabilitation project. We're fully painting the bridge. We're not painting the entire interchange. We don't have the funding to do the ramps. There's a lot of ramp structures associated with this area, but we're doing all what we call main lines, all the approach spans and the main arch span of the bridge, so we're painting all of that — a lot of steel."

Zang said that steel repairs are being done wherever necessary, which involves some areas where water was leaking over the years from some of the joints.

Zang said the work is necessary because of the age of the structure.

"It's approaching 50 years old," he said. "It's never been painted other than some minor maintenance work here and there, but it needs a full paint job. But we have the original paint on the bridge now — we call that an industrial coating system — so that gets completely blasted off to bare metal and then it gets a brand new three coat paint system."

Zang noted that "a little bit of everything" is currently happening on the project.

"Right now, we are right in the middle of it, so there's a lot going on," he said. "A lot of paint work. There's painting underneath the roadway surface to the structure below what we call the steel superstructure. There's also painting going on above the roadway to the arch itself, the arch pieces. Everything's happening right now."

The first of the northbound weekend closures on the I-79 Neville Island Bridge began on Friday night, July 9 through Monday morning, July 12. 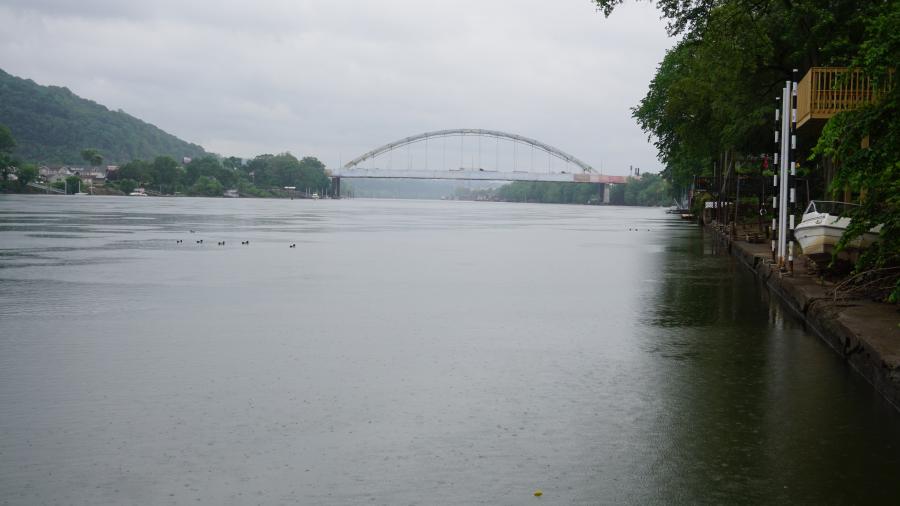 Zang also spoke about the challenges to the project, noting the size first.

"Number one, it's one of the larger structures that we have in our district, so there's a lot of steel to paint," he said. "It's just a very large quantity of paint work. So that's a challenge."

Another challenge is working over traffic, with almost 80,000 vehicles a day using the bridge.

"We had a lot of careful planning and design to make sure that we were able to build this and not affect traffic too, too much, so we restricted when the contractor can restrict lanes and things like that during the peak travel periods," Zane said. "We've got weekend closures, full closures of Interstate 79. We just had the first one two weekends ago and it went very well, but that's obviously a very big challenge to our customers and to the public."

Another challenge that had to be solved involved peregrine falcons living on the bridge, which had to be protected.

"The Pennsylvania Game Commission pays a lot of attention to them," Zang said. "There are people that watch them almost every day and there's restrictions there that if they were to lay an egg on that bridge, then we would have to stop work. So, we had some provisions in the contract that the contractor had to immediately start putting up the paint containment system and hurry up to get that up before the falcons could nest. So, we were basically shooing them away with our work, and we were successful with that.

Zang said that the crew had to make some adjustments because they didn't get all the containment up in time. So, they shifted gears and started doing things to basically keep the falcons away, like wrapping all of the connections on the bridge to keep them from nesting there.

"It sounds kind of silly, but you could not believe the amount of delays and the costs of delaying a project like this because of a bird, but it's reality," he said. "So that was a big challenge."

Another issue was coordinating with a busy railroad under one of the span. Crews worked on the weekends so there was a bit less train traffic to coordinate with the railroad and flaggers.

As far as unique aspects of the job, Zang said every project is a little bit different. The bridge had steel splice plates on some of the main girder lines. These were primary structural carrying members of the bridge that had some deterioration and were getting replaced, so some temporary towers were added to support them. This was done during the weekend closure so traffic was removed. The critical pieces were disconnected and the new ones added.

"Other than that, there's only one Neville Island Bridge in the world, that's the one we're working on," Zang said. "It's a little bit different. It's a unique structure. It's not like every other bridge out there. We do have a similar bridge, the Birmingham Bridge in Pittsburgh, so we have a little bit of experience with this type of bridge. It's a tied arch, but it is unique. Like I said, it's very large and has what are called trussed floor beams, so it's a bit unique of a structure because of its size and its structural components."

Zang reported that the funding and design schedules worked out for them to do another large project last year, the Sewickley Bridge, which is right up the river from the Neville Island Bridge. Each serves as the detour for the other bridge.

"And we actually shut down the Sewickley Bridge last summer for 24 days to put a latex modified concrete overlay on the bridge and replace all the expansion dams," he said. "So, this project had to be closely coordinated — a lot of planning and design to make sure they didn't overlap."

"It literally abuts the end of this project," Zang said. "That's getting started very soon and we've got some other projects. We've got a local project that's occurring on Route 51, which was the original detour to the Neville Island Bridge and we had to switch gears on this project and change the detour route so we could avoid that project. So, there's a lot going on in that area right now."

"Just on the contractor side of things, it's about 70 people from the contractor union, laborers and carpenters and painters out there and then there's also the construction oversight, so this project is putting a lot of people to work," Zang said. "And as I said, the bridge has never been painted, it's a very large structure. We've been doing repairs to it since I started at PennDOT 23 years ago. We've been doing steel repairs, things like that, but this is a major project. We're excited to have the funding to do it and it's an important project. It's a very important bridge just from the ADT, the traffic volume and it's size and importance. So, there's a very busy river navigation channel underneath it, so it's an important project and we're really happy to be able to deliver it."

Cowan noted that approximately 60 people are assigned to the job during daylight hours and seven on the nightshift. The project is 1.4 mi. in each direction. 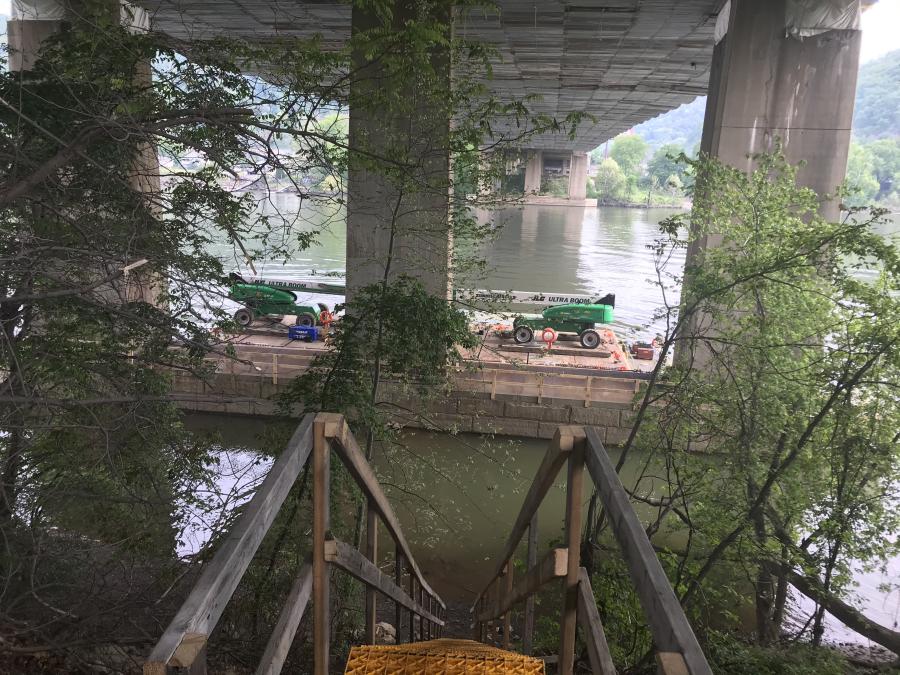 The jacking, bearing and steel repair portion of the project includes 130 bearings and 70,000 lbs. of new steel. The LMC for the project also involves 5,800 cu. ft. of shotcrete and 3,300 sq. yds. each of mill, hydro and overlay.