Racing to Beat the Next Hurricane Season 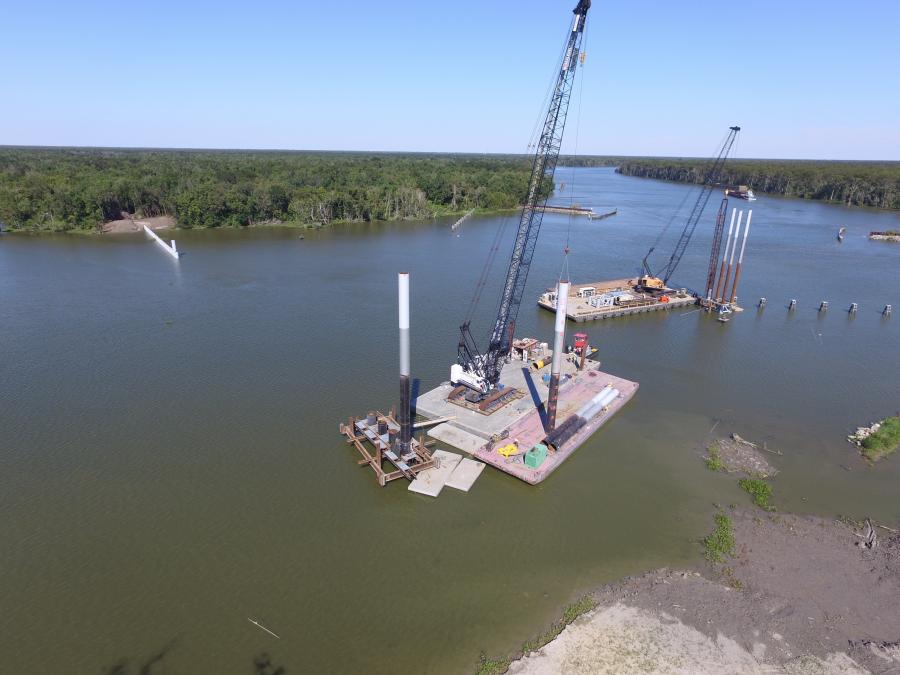 The total awarded to date for the Louisiana Floodgate is $55,377,912, which is well below budget.

Work is under way to construct a permanent floodgate on Bayou Chene near Morgan City, La., that will provide backwater flood protection for six parishes in the path of Mississippi and Atchafalaya river overflows that result from high water events.

Bayou Chene, approximately 9 mi. southeast of Morgan City and 50 mi. south of Baton Rouge, was first settled in the 1830s. During high-water events on the Atchafalaya River, Bayou Chene has been a major conduit for backwater flooding in the parishes of St. Mary, Terrebonne, Lafourche, St. Martin, Assumption and Iberville. High water flowing down the Atchafalaya past Morgan City will turn and head northwest up Bayou Chene into the Lake Palourde and Lake Verret watersheds, causing flooding across that region.

The area has experienced a number of floods since the early 20th century, but three major floods in the last 10 years led to the decision to find a permanent solution.

"Backwater flooding in St. Mary and neighboring parishes has increasingly been a problem over the past decade as the Mississippi River and in turn, the Atchafalaya, has reached flood stage," said Gov. John Bel Edwards.

Five years later, another high-water event in the Atchafalaya River threatened the surrounding six-parish area, so SMLD contracted an engineering firm to design an emergency structure to prevent backwater flooding.

"The structure was designed, bid and constructed in 15 days, utilizing existing wing walls from a previous flood fight," Harrouch reported. The structure was later removed due to a water differential greater than 1 ft. between the protected and unprotected sides. 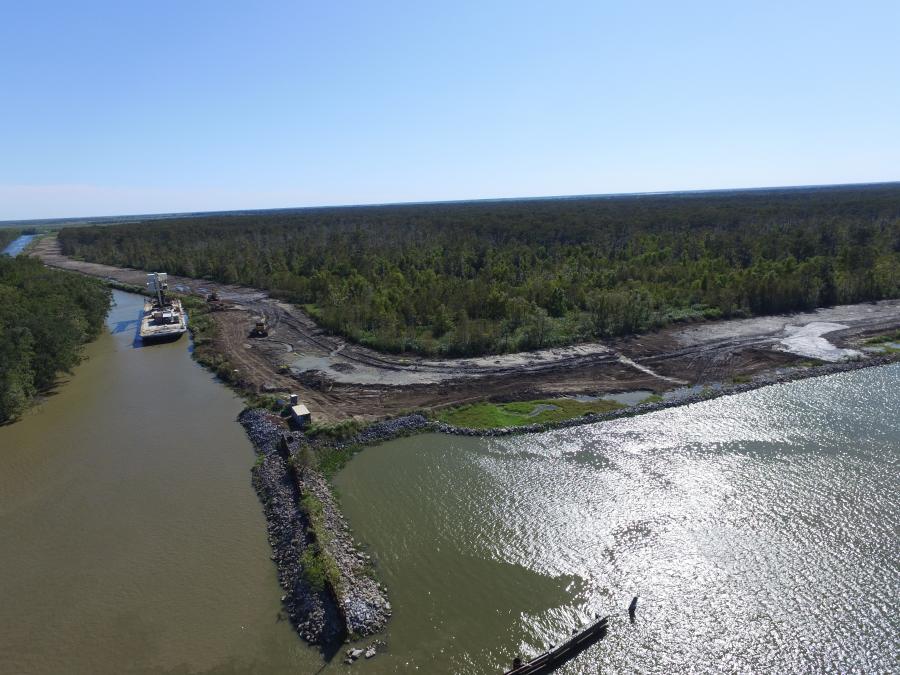 According to KATC News, St. Mary Parish President David Hanagriff said, "In 2016, it took 15 days to design, bid, build and install the temporary barge. It did the job, but it wasn't cheap and it had to be removed after the flood threat passed because it was blocking navigation. Having a permanent structure we can open and close is a better, smarter solution."

As long ago as 1973, the emergency method of flood control in times of high water in the Atchafalaya consisted of temporarily sinking a barge in the Bayou Chene channel. Once flooding subsided, the temporary barge floodgate was removed to allow for normal drainage and boat traffic.

However, the deployment and removal of the temporary barge as a flood control measure is costly. St. Mary levee officials said the 2016 closure cost $7 million. In 2018, the emergency structure cost $5.2 million. Edwards describes sinking barges as a "costly and short-term approach" and expects this permanent structure to provide a reliable, long-term solution.

In addition, Harrouch expressed concerns that failure to come up with an effective plan could result in loss of reimbursement from FEMA for future floods.

As early as 2011, CPRA began considering a project for a more permanent solution to protect the area from the swamps southeast of the bayou to Morgan City to the northwest. In addition to $5 million the agency put up for engineering and design, it acquired an additional $75 million in of Gulf of Mexico Energy Security Act funds for construction.

But before that happened, another flood took place.

"In May 2019, APTIM was hired to design the emergency structure yet again to prevent backwater flooding while the permanent structure was being designed," Harrouch said. This project was completed in 11 days from design to construction. It was the third time in less than 10 years that a barge was deployed to assist with flood control, underscoring the need for a permanent solution. 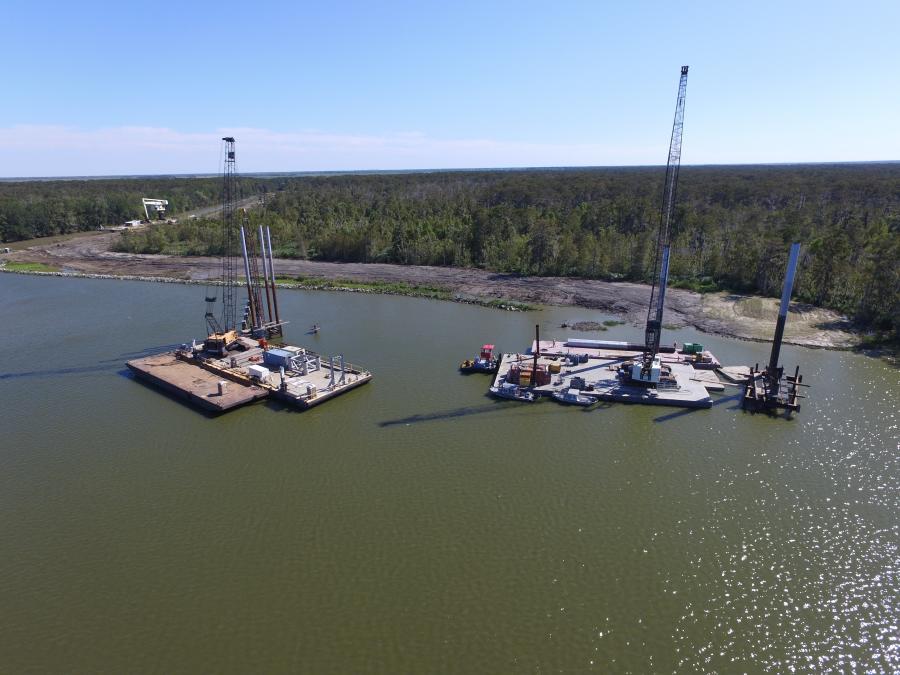 That solution will feature steel braced floodwalls that extend from both the north and south banks of Bayou Chene to the flood gate receiving structure in the channel. The floodgate will consist of an automated 403-ft. clear opening barge gate that can swing into place and be ballasted, providing 10 ft. of flood protection against high-river events. Harrouch pointed out that the 400-ft. floating steel gate will be the largest floodgate in Louisiana. When closed, using a winch and tugboats, it will act as a dam, protecting more than 100,000 residents in a six-parish region with the push of a button.

The project also will include protection fendering systems in the Bayou Chene channel and riprap scour protection. The existing parish road (Avoca Road) and an existing levee berm from Avoca Road to the north side of the Bayou Chene structure (totaling approximately 7 mi.) will be raised to an 8-ft. elevation. On the south side, an 8-ft.-elevation earthen levee with geotextile fabric will connect the structure to the Tabor Canal levee, which also will be elevated to 8 ft., utilizing the existing berm and geotextile fabric.

Overseen by the Coastal Protection and Restoration Authority and St. Mary Parish Levee District, the project is being divided into six phases:

Phase IA has been completed. Phase 1B is expected to wrap up in November, with material being placed to raise the elevation of Tabor Canal. An E-Crane owned by Patriot Construction & Industrial was used to place dredged material along Tabor Canal.

Phases 2 and 3 are under way and are expected to be completed in August 2021. Phase 4A was recently awarded and began in October, with completion anticipated in June 2021.

Phase 4B will be let to bid in March 2021. According to Harrouch, Louisiana state law requires all funding to be in place prior to bidding, but CPRA has not yet received all the money.

Construction firms awarded to each phase:

The total awarded to date is $55,377,912, which Harrouch points out is well below budget. One assist to budget savings comes from sheet pile purchased for the 2011 and 2016 floods that was left in place to accommodate another temporary flood protection structure in anticipation of future flooding and is now being utilized and incorporated into the project as owner-supplied materials. 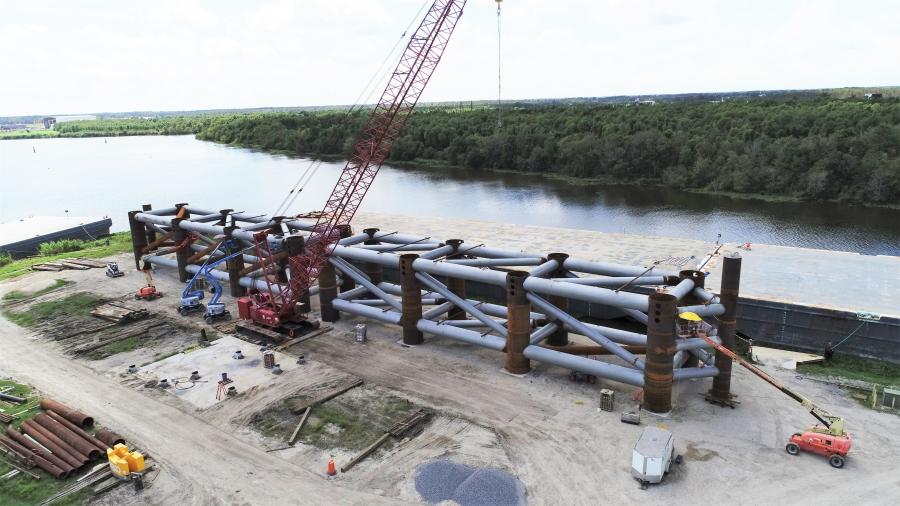 The floodgate itself will be a steel barge gate with a pivot pile and winch operation. The elevation of the barge gate will be 10.0 NAVD88. It will feature a pumping system consisting of electric submersible pumps and an electric/hydraulic winching system with electrical power from a generator.

The existing temporary Bayou Chene closure structure will be removed. Materials from it will be utilized in the proposed structure as much as possible.

The Tabor Canal weir/gate closure will be constructed to elevation 8.0 NAVD88. 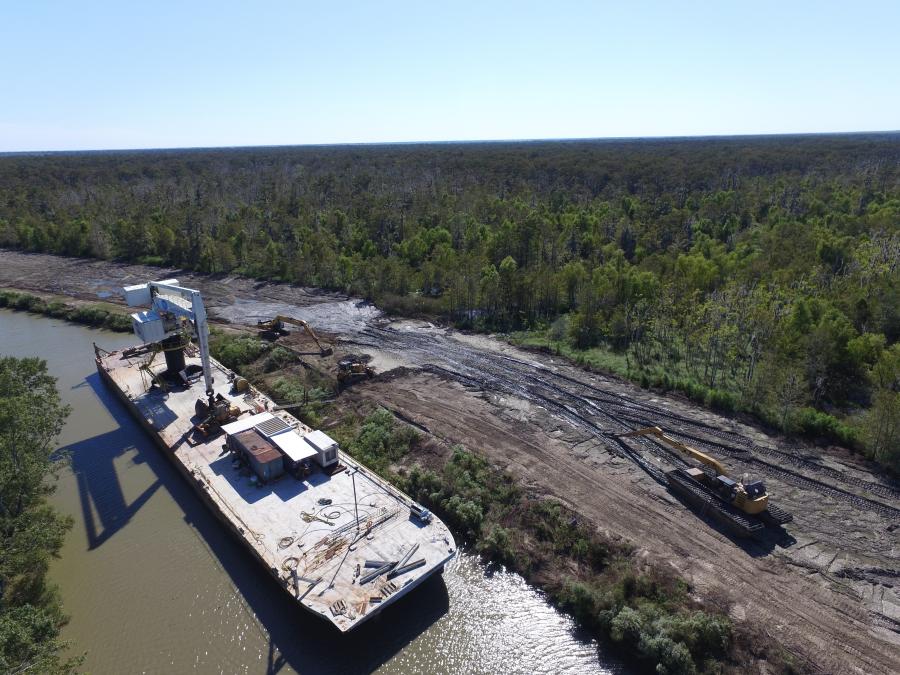 An emergency operation plan was required in case a storm threat shuts down work. Nevertheless, while a levee district summary predicted a completion date sometime in mid-2022, he said CPRA is aiming for late next year to have the floodgate and remaining components of the project, including road improvements, armored earthen levee and a weir structure complete and operational.

But there are challenges beyond the weather. Access is one of them. Equipment and materials such as the jackets — which are used to place the piles — must be transported to the site by barge. Massive cranes are situated on barges to drive the piles and sheet wall. Because they were unable to use coffer dams, crews must jet the pile down with air and then drive them in this "in the wet" construction method. Harrouch reported no issues with the process, citing the heavy clay soil.

The floodgate is being fabricated at Bollinger Shipyard in Amelia, La., and will be towed by tugboats to the site, after which Louisiana-based Sealevel Construction Inc. will install the structure.

Knowing that "this project will alleviate backwater flooding in a six-parish area," Harrouch considers it "extremely significant" and said CPRA has gotten creative on the budget, design and implementation. CEG