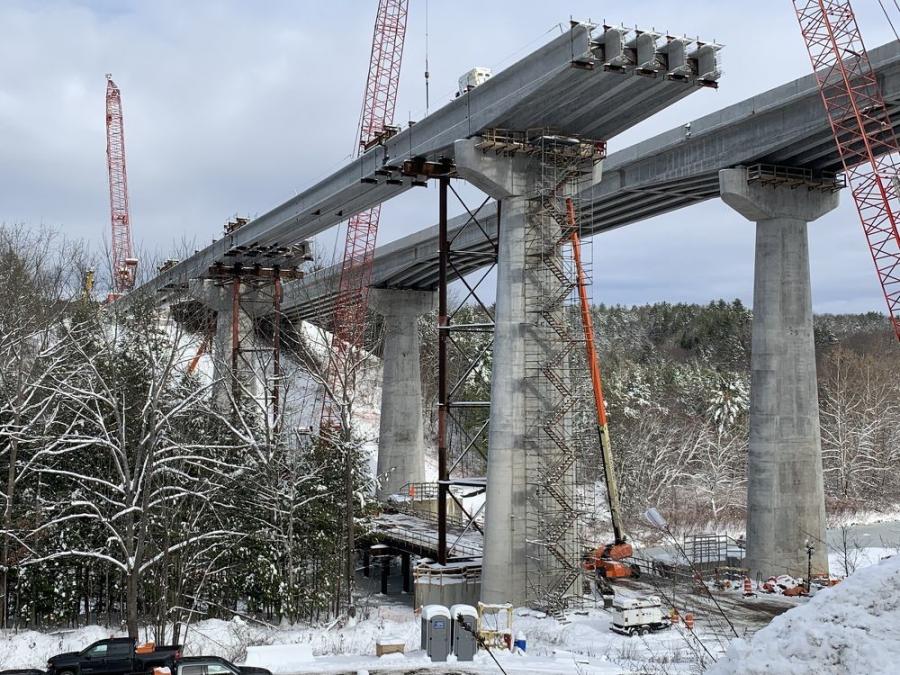 The construction of the Rockingham twin bridges, which travel over the Williams River and the Green Mountain Railroad on I-91 in Rockingham, Vt., will be completed in July, with Reed & Reed of Woolwich, Maine, finishing 24S, the southbound bridge.

"We finished all cast-in-place for the concrete deck and barrier, and now we have membraning and paving that will be completed this summer," said Reed & Reed Project Manager John Phillips. 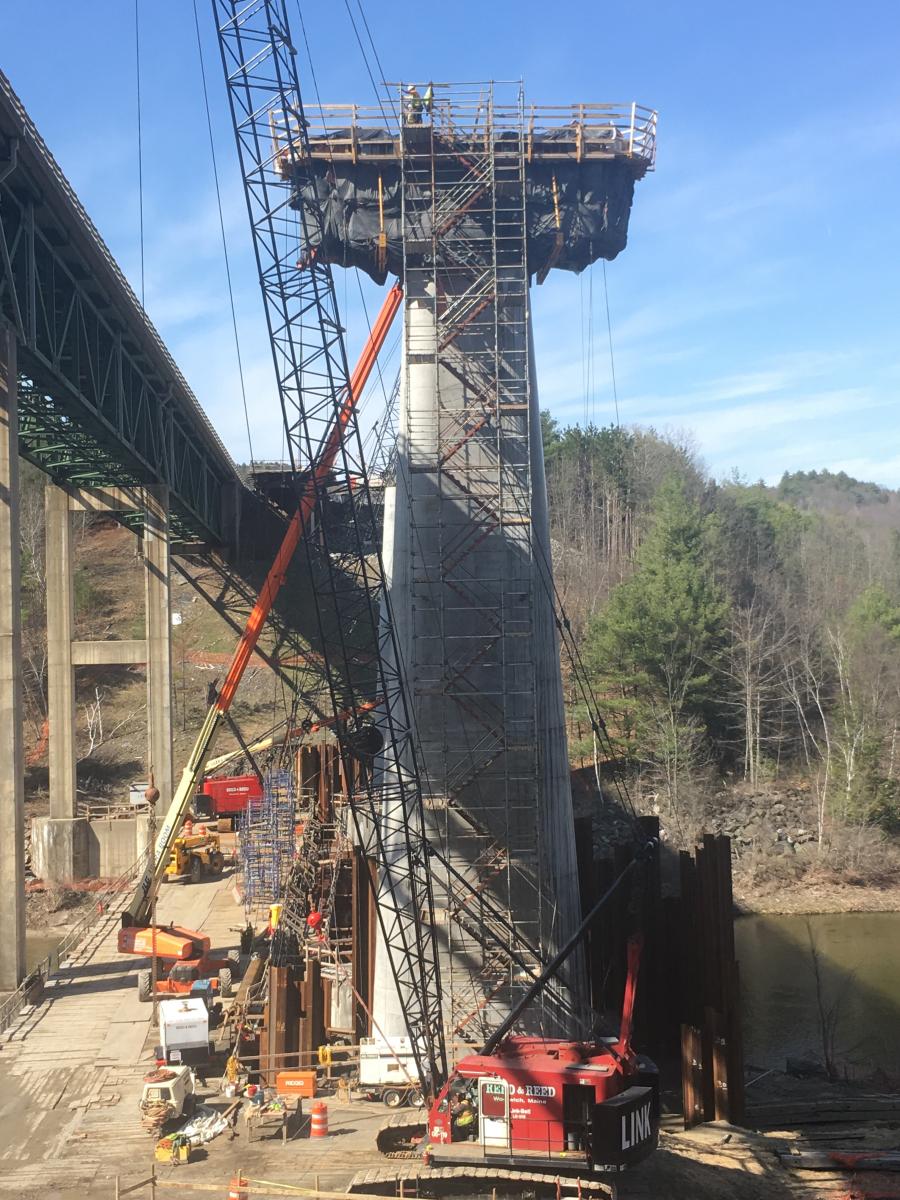 The construction of the bridges, which started with the northbound bridge in 2017 utilized precast post tensioned girders sitting on top of cast-in-place concrete columns with an overall structure length of 860 ft. and a height of 140 ft. The bridge decks are 130 ft. above the Williams River.

"The new bridges are a little more than six feet wider than the previous bridges and are a four-span spliced precast concrete girder structure, which is a first for Vermont," said VTrans Resident Engineer Daryl Bassett.

"This project is Reed & Reed's first ever spliced concrete beam bridge," the company said in a statement. "The beam structure consists of five runs of seven individual concrete beams that were installed on temporary support framework, aligned and held in position with 30 steel strong backs. Cast-in-place concrete closures were placed between the ends of the beams and then three, 19 strand tendons running from abutment to abutment were installed and tensioned. Each bridge includes piers that vary in height from 70 to 138 feet tall. To accommodate VTrans' stringent requirements for pier slenderness, we used two bearings per girder at each pier, which increased the rotational stiffness at the pier caps."

Thomas French, senior project manager of HDR Engineering Manchester, N.H., the design firm on the job, said, "The precast girder fabricator delivered the bridge segments one at a time. They varied in weight up to nearly 200,000 pounds. Each segment was precast and includes pretensioned steel cables in them."

Phillips noted working with the girders was a big challenge of the job.

"Splicing girders in mid-air … it was a big challenge how to connect them and the nature of the site, with the deep river below the bridge working at height to erect the girders and handling the girders between two bridges," he said. "We did it by rolling road blocks. We also needed to heat work areas for concrete placement in winters."

The job that was a design build project, which required companies to propose their methodology for the job as well as a price. 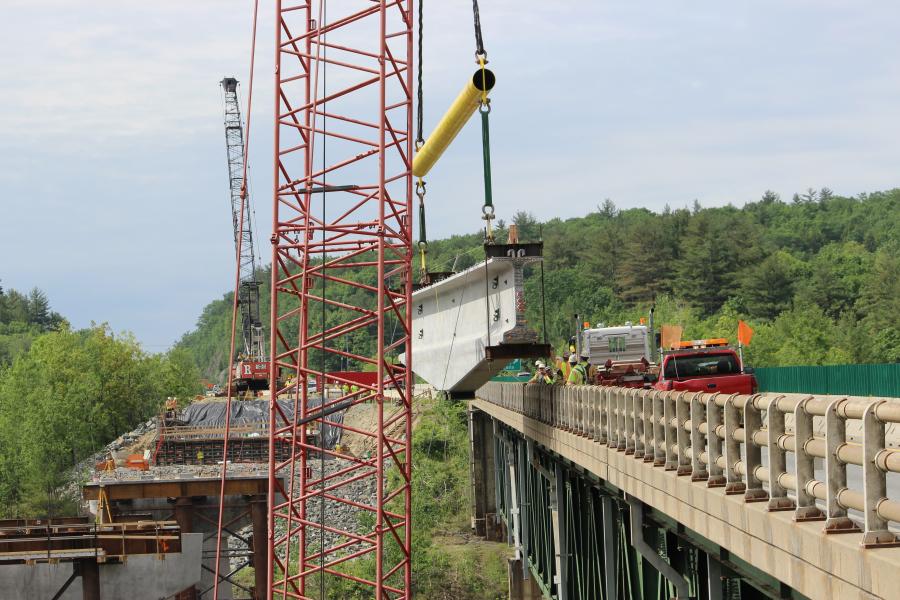 "Our winning proposal was a twin four-span precast concrete spliced bridges. Abutments and piers are supported on pile foundations," the Reed & Reed said.

Their bid price of $44.3 million also was accepted.

"Our team looked at a combination of price and proposal of how they will construct the bridge with details on maintenance and awarded it to Reed & Reed on a mathematical formula," VTrans said.

The final price total is $50.9 million and is 90 percent federally funded.

Age and heavy traffic took a toll on the Rockingham bridges, known locally as the High Bridges, which were built in 1960, rehabilitated in 1988 and were in poor condition, with areas of significant concrete spalling and exposed rebar on the underside of the deck and areas of section loss in structural steel. An engineering study determined the most long-term cost-effective solution was to replace both bridges.

The new bridges were designed for a 100-year service life and are expected to save money on painting and maintenance over the next century. To accomplish this, designers used stainless steel reinforcing in the pier caps and deck, as well as concrete highly resistant to chloride penetration. An analysis of the site's soil also was completed to ensure the piles were large enough to account for 100 years of degradation.

Once bridge 24S is open, the temporary crossovers will be removed and traffic will be restored fully in both directions. CEG