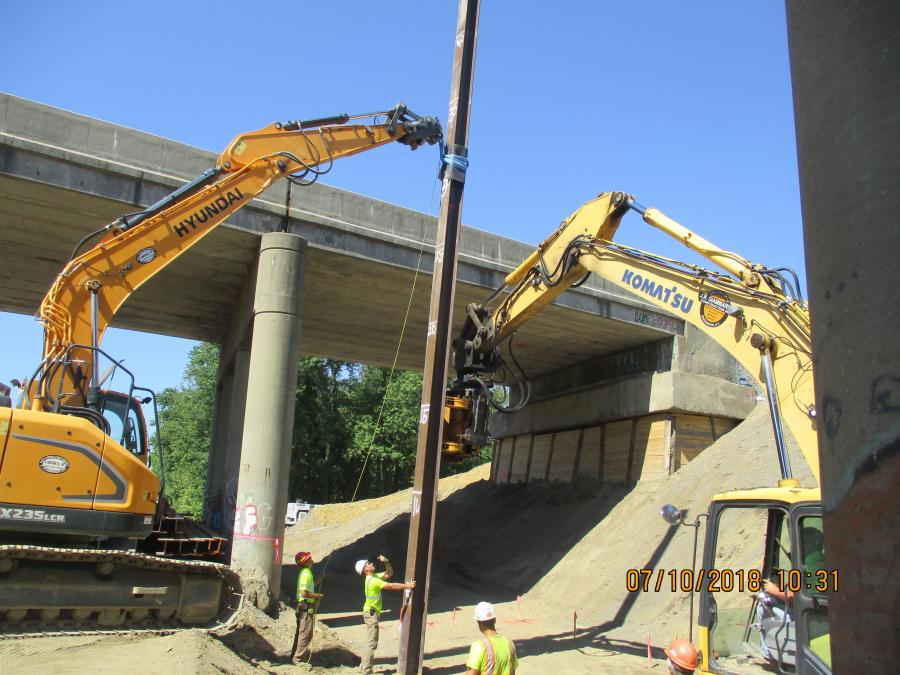 NYSDOT is removing and replacing the bridges carrying Interstate 84 over Metro-North Railroad lines in the town of Fishkill, Dutchess County. Work on the $15.8 million project began in April 2018. (NYSDOT photo)

In an effort to enhance the safety and longevity of Hudson Valley infrastructure, the New York State Department of Transportation (NYSDOT) is removing and replacing the eastbound and westbound bridges carrying Interstate 84 over Metro-North Railroad lines in the town of Fishkill, Dutchess County. Work on the $15.8 million project began in April 2018.

“Replacing the aging bridges over the Metro-North Beacon Rail line on I-84 with modern new structures ensures this important interstate highway will remain safe and efficient for the more than 50,000 freight, commercial and passenger vehicles who use it daily,” said Paul Karas, acting DOT commissioner. “Governor Cuomo is committed to improving New York State's infrastructure so it will remain safe and functional for generations to come.”

Karas also said keeping I-84 in good condition enables trucks and commerce to proceed without impediment in the Hudson Valley region. The old three-span bridges, built in the early 1960s, will be replaced with a single, modern continuous span bridge that will contribute to better traffic flow and operations. The bridge will improve the horizontal and vertical clearance over the railroad line, making certain it meets current bridge height requirements over the railroad tracks. 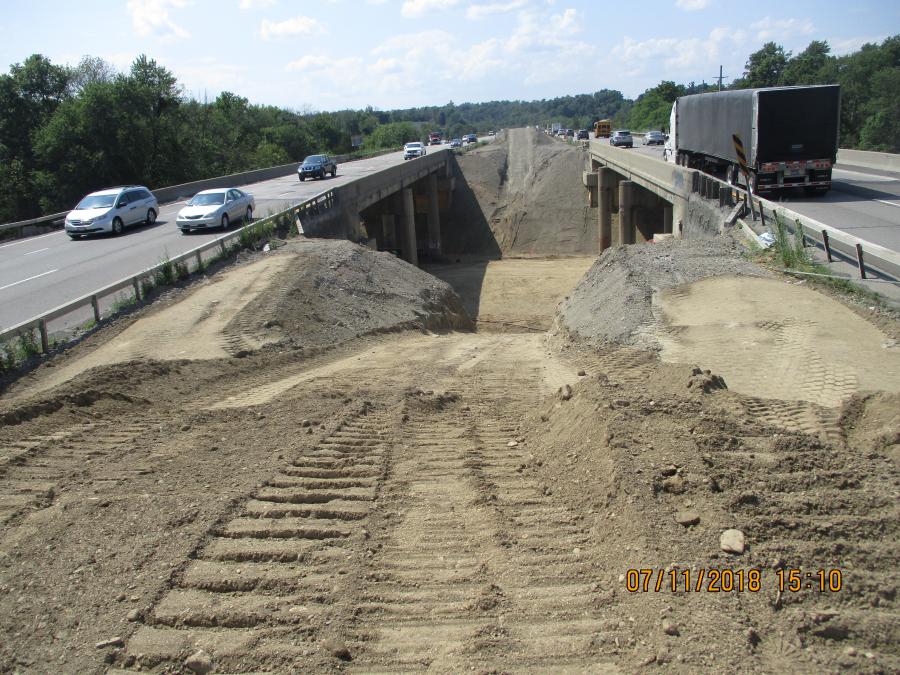 In addition to the new bridge, the eastbound Exit 12 on-ramp and the westbound Exit 12 off-ramp will be raised to adjust the vertical clearance over the railroad, and the I-84 deceleration lane to the off ramp will be lengthened. Pavement, guiderail, signs and pavement markings within the project limits will all be replaced, as part of the overall construction plans.

In keeping with Gov. Cuomo's Drivers First Initiative, the project has been designed to minimize impacts to the traveling public. Construction will be accelerated to limit the length of construction on the interstate. Traffic will be maintained in both directions on I-84 for the duration of the project. The Exit 12 exit ramp will be closed with a posted detour for roughly seven days. Lane and the ramp closures will be announced in advance.

Bridge construction is not expected to impact the rail line, but area motorists will need to be extra cautious during construction. Drivers are reminded that fines are doubled for speeding in work zones.

Funding for the project is provided by both federal and state sources. According to Gina DiSarro, NYSDOT public information officer, Hudson Valley Region, the money is being put to good use.

“The bridges are being replaced because, though safe, they were nearing the end of their useful life, and replacing them was the most efficient and cost-effective way to update them.” 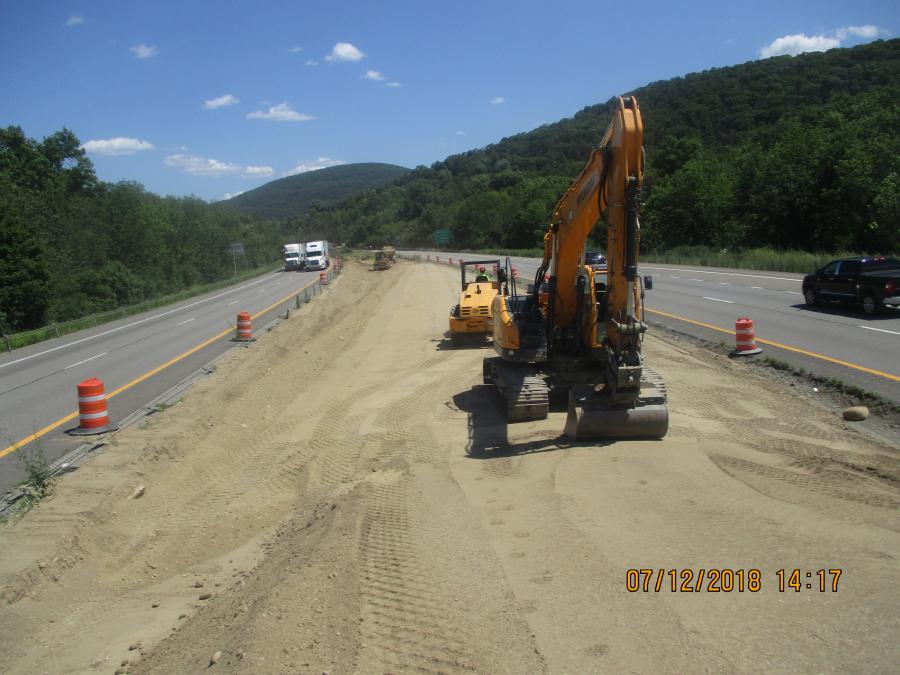 Construction crews are making steel repairs along the current bridge embankments and setting pilings for the new bridge. The project will construct a bridge in the median and eastbound traffic will be shifted onto the bridge during removal and replacement of the eastbound bridge. When the eastbound bridge is complete, westbound traffic will be shifted to the median, while the westbound bridge is removed and replaced. The final configuration on the new bridge will include expanded shoulders.

Various heavy machinery is being used on the project. A bulldozer, excavator and dump trucks have been required for earthwork, excavating and moving soil. To install steel H piles into the bedrock, a vibratory pile driver and hammer are being utilized.

“Keeping the interstate's bridges in good condition enables motorists, including commercial trucks, to proceed without impediment, which has a positive impact on the economic sustainability and vitality of the Hudson Valley and New York State, as a whole.” 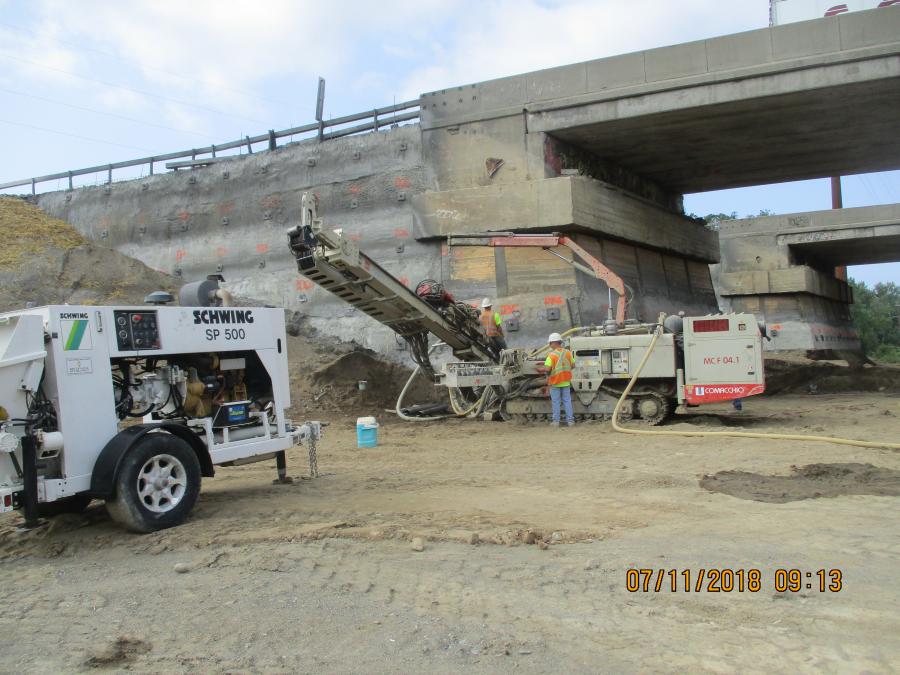 Excavation at the existing abutments is slow and controlled, as plans called for individual 5-ft. cuts (steps), with wire mesh and shotcrete applied. Sixteen-in. soil nails are then installed to hold back the embankment. Excavation is generally clean and straightforward, because the material used when the original bridges were built was appropriate backfill. No stones more than 6 in. have been found.

The condition of the site before work began was not ideal.

“Below the bridges is an abandoned railroad spur,” said DiSarro. “This set of tracks has been proposed for a future trolley, and alongside it a walking path. When we arrived, there was refuse strewn around and brush growing in all four quadrants of our site.”

As work continues, crews will be working toward specific goals.

“There are three project milestones. The first will be to get the median bridge built, pave the crossover and be prepared for continued construction early next spring. Traffic is not expected to use the crossover during the winter months. Then next spring, eastbound traffic will be moved onto the crossover, and the eastbound bridge will be demolished and replaced. When that is complete, traffic will be switched, and the westbound bridge will be swapped and replaced.”

The elements will continue to be a factor during the ongoing work.

“Weather can impact almost any construction project — good or bad weather,” said DiSarro. “If the weather is generally favorable, it could mean work gets done ahead of schedule. If there is adverse weather, there can be challenges accomplishing some of the work in a timely fashion, or it can make the work more complex. Either way, crews are prepared to handle whatever occurs.”

The project is currently on schedule, and is expected to be completed by the end of 2019.