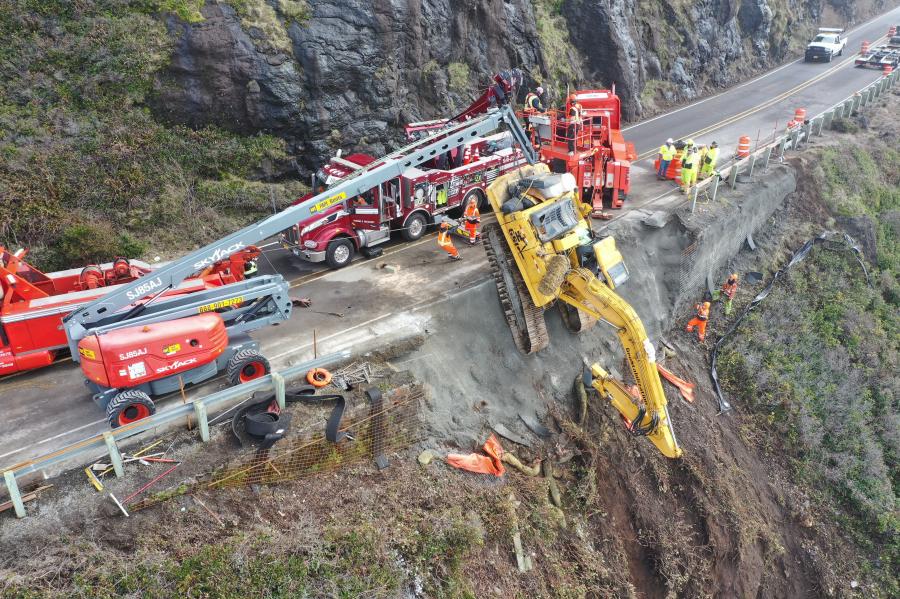 A portion of U.S. 101 collapsed on Feb. 5 causing a drill rig and the operator to plummet from the 150-ft. high road when it gave way.

Angela Beers-Seydel was enjoying some well-deserved downtime on Feb. 5 when she learned of the collapsed U.S. 101 Oregon coast highway that sent a drill rig and its operator plummeting from the 150-ft. high road.

Seydel, spokeswoman of the Oregon Department of Transportation (ODOT), knew instantly they were dealing with an accident that might very well turn out to be tragic; and that getting help would be hindered by the lack of cell phone coverage in the area. 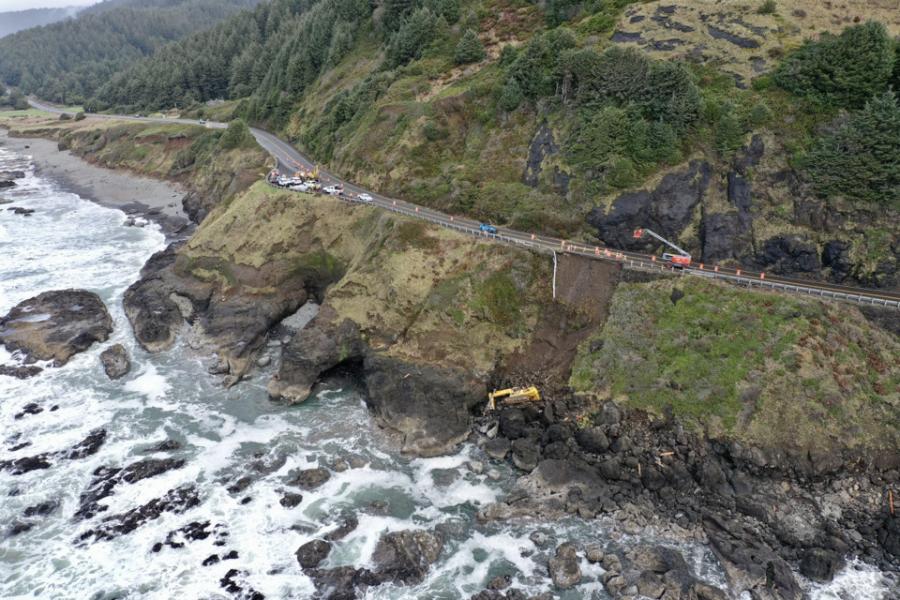 "When I was called, all that was known was that the rig had gone over the edge, that emergency services were on their way and that Coast Guard rescue had been called because no one was sure about the status of the operator, and whether or not the rig would stay on the rocks or go into the ocean," Seydel said.

At the time of the collapse, crews with GeoStabilization International (GSI) were on the scene working to stabilize the historic highway after cracks were reported in January. A tiltmeter indicated a retaining wall beneath the surface was moving and would require 150 ft. of micropiling to stabilize. That was the job at hand when 50 ft. of the wall collapsed.

Crews feared the worst. But as it turned out, the operator survived the fall with three fractures.

"We now know that the rig slid down the hill," Seydel said. "He stayed belted in the cab, and had the presence of mind to turn off the engine before the crew and others helped him out and up the hill to the surface."

Days later, crews with Mast Brothers Towing & Recovery, based on the southern Oregon coast and in business since 1969, were on site with three semi-tow trucks ready to retrieve the drill rig from the rocks and thundering waves below. The equipment included a 2017 Peterbilt with a 50-60 ton Jerr-Dan rotator unit; a 1995 Peterbilt with a 35-ton Jerr-Dan wrecker unit; and a 2001 Kenworth P2000 with a 45-ton Vulcan 940 wrecker unit.

While it was originally thought a crane would be necessary to recover the rig, that idea was quickly dispelled.

"A crane was not the best option because it doesn't have that capacity," said Josh Mast, general manager and second-generation member of the soon-to-be 4th-generation family business. "A crane's power is in the direct pick up. It has to be directly over it. Cranes aren't meant to drag and winch and scoot things. That's not where all the lift is."

One of Mast's biggest concerns was whether the highway could hold the added weight of the recovery equipment. A portion of it had already collapsed and there wasn't much remaining of the already-narrow stretch. They called in an extra team from GSI and a repel team from Seattle to fashioned a plan. 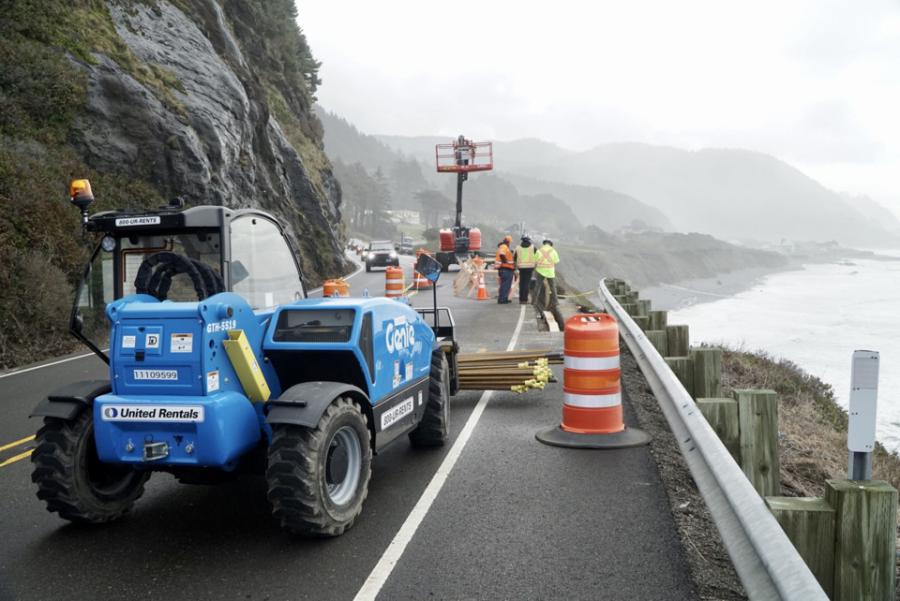 The first day was spent on prep work, cleaning up debris from the fall and getting the drill rig — now facing the ocean and wedged in the rocks — upright, turned around and facing uphill.

"The way we anticipated hooking to that machine ... normally, they have eyes you can grab ahold of it," Mast said. "Once I got down and could look, I could tell there were no holes. We had to rethink the way we were going to hook to it and pull it out. It kind of changed our initial plan, but it worked out really well. In the back of the machine is a compressor unit. It was all but torn off, but there were mounting holes and we used those for our primary pull points. We needed the drill head off because of the position the boom was in and also because of the vertical drop we had to go up. If we didn't get the drill head off, the drill was going to dig in like an anchor. We had to get it off not only because it was going to dig in, but those drill heads, even beat up, are extremely expensive."

Recovery of the rig was set for Feb. 26. But Mother Nature had other ideas.

On that morning, crews found a winter storm had moved in with waves already breaking over the rig and winds rocking to 60 mph. They knew it was only going to get worse, and decided to wait.

The very next morning, the weather and ocean had both calmed, and the tide was low. Crews moved the trucks into position, hooked the lines to the drill rig and started pulling. 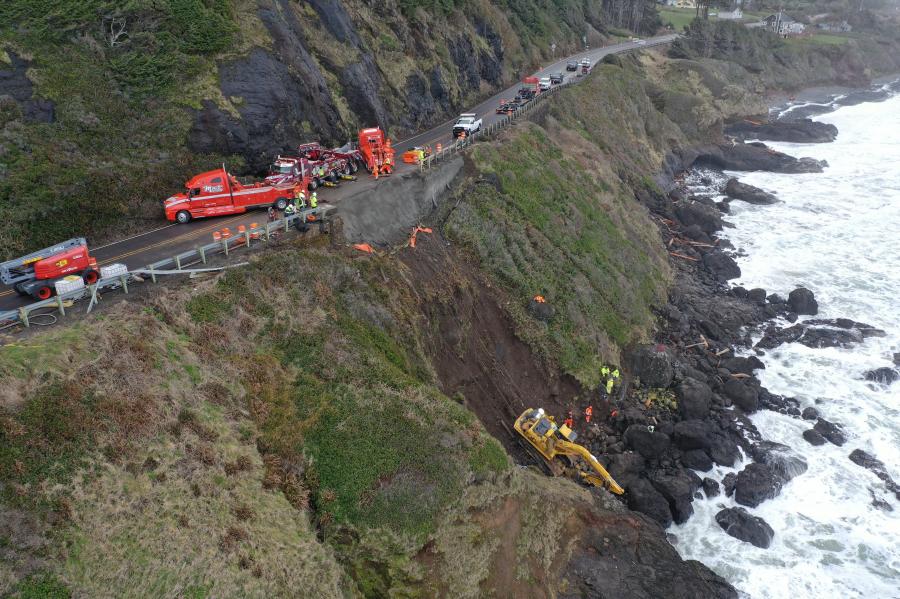 "The wreckers were set in position and the drill rig had been moved a few feet up the rocks," she said. "Crews surrounded it, re-setting and testing tow lines. People moved out of the way, engine sounds increased, everyone near the edge watched intently and the tow lines became taunt. Everyone holds their breath. The drill rig inches up. Everything stops, lines are reset and it moves forward again.

"Reaching the road surface, the drill rig was held, the front half in the air and the back leaning on the slope, for what seemed like forever," she added. "Slowly it lowered to the ground to a collective sigh of relief. Recovery had gone according to plan."

For Mast, it was one for the books.

"We've done a big variety of jobs," Mast said. "I would say out of all … this is probably one of the more challenging. It was unique. When you get stuff over the side, it's usually cars, or you might get a semi truck, but nothing of that weight, plus the terrain and only lane to work with and three semi tow trucks, and an excavator fit in a spot not very big. It made you think, that's for sure." CEG