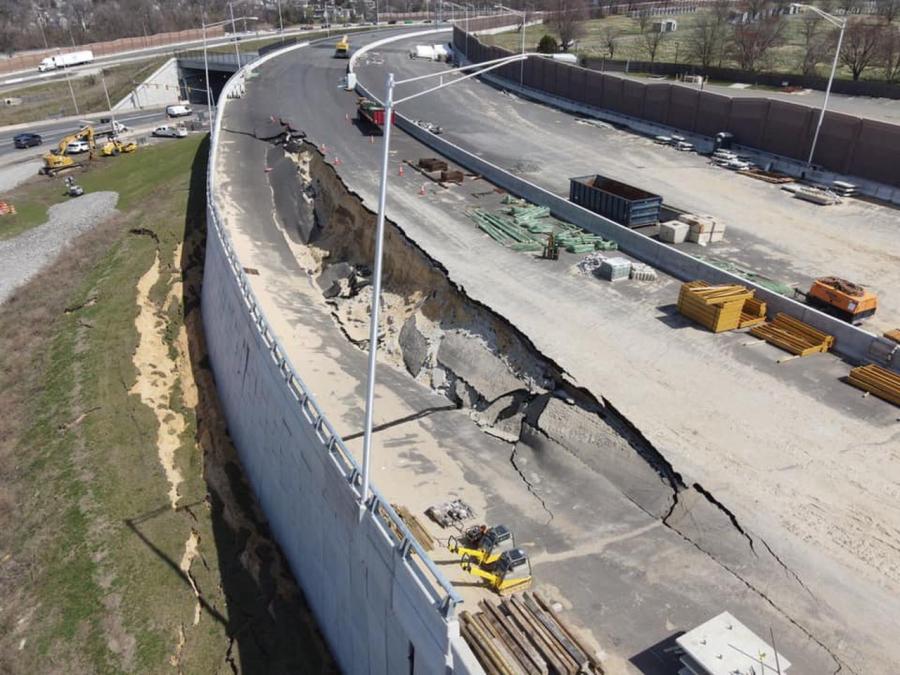 An aerial photo shows the top of a partially collapsed retaining wall on I-295 in Bellmawr. The bottom of the wall is bowed outward where the roadway surface on top fell in March 25. (NJ.com photo)

A partial collapse of a retaining wall along Interstate 295 in Bellmawr, N.J., on March 25 quickly led crews to the accident site to make repairs while lane closures snarled the freeway east of Philadelphia.

The New Jersey Department of Transportation (NJDOT) is investigating the cause of the "rare" incident along I-295 in Bellmawr, agency spokesman Steven Schapiro said the day after the collapse.

The NJDOT also is working to further reinforce a slope by the highway, and to monitor its condition, he added.

"At this time, everything looks stable," Schapiro said, noting that the repair crews fixing the accident would continue "at least through Monday [March 29]."

NJDOT closed the right lane of the northbound highway around noon on March 25, after a retaining wall "shifted and partially collapsed" during the overnight hours,

"Motorists should expect heavy congestion on I-295 northbound and Route 42 northbound," the agency said in announcing the closure.

The lane shutdown will continue "as a precaution while engineers gather data," Schapiro said.

He said the NJDOT "is working with our contractors, consultants and in-house staff to evaluate the situation to understand the cause and design a repair."

"It is too soon to determine what repairs will be necessary," Schapiro explained on March 26.

Engineers also are examining other retaining walls "in the vicinity of the collapse," he added.

"We don't anticipate any additional lane closures at this time," Schapiro said.

The collapse occurred in an area undergoing widespread highway work as part of the NJDOT's multi-year Direct Connection project in Bellmawr, Gloucester City and Mount Ephraim.

The $900 million effort is intended to ease congestion and reduce accidents for motorists using I-295, I-76 and NJ Route 42, also known as the North-South Freeway.

Schapiro cautioned that "it is too soon to know how this will impact the project schedule.

The Direct Connection currently is set for completion in 2027.

The retaining wall collapsed in an area north of Browning Road, where workers are building a new portion of I-295, he explained.

"It is near where I-295 northbound curves to the east and meets traffic coming from I-76 east and goes into the tunnel," Schapiro observed. "The lane closure begins near Essex Avenue for safety reasons."

He said Direct Connection workers "observed cracks in the asphalt and began investigating a day before the incident."

"The collapse is not near active lanes," Schapiro said. "It was on a portion of new roadway under construction. The lane was closed as a precaution, as a portion of it is near the wall."

A representative of the primary contractor for the Direct Connection, South State Inc. of Bridgeton, N.J., could not be reached for immediate comment.