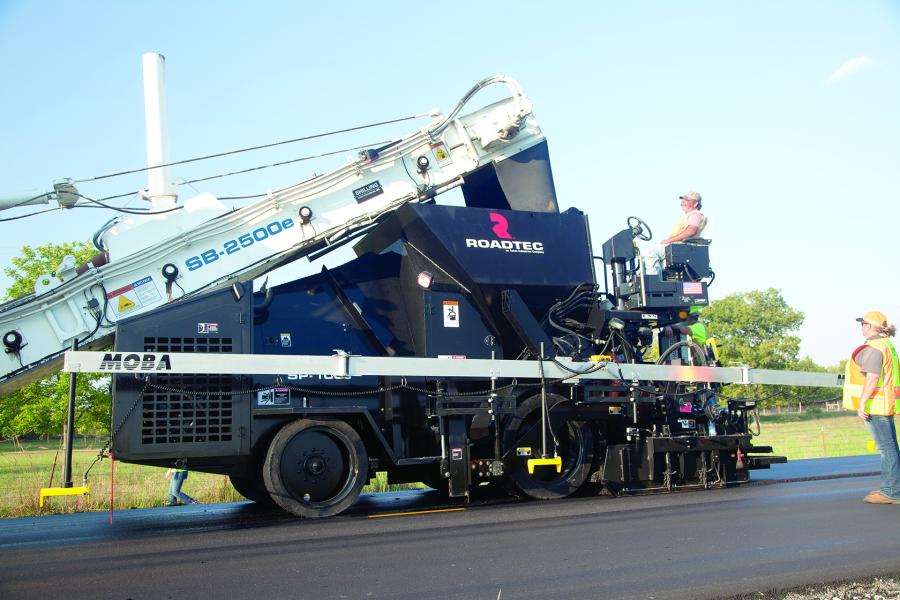 The 32,360 lb. (14,678 kg) machine is designed to be a low-maintenance, completely gravity-fed paver specifically for operating in conjunction with a Roadtec shuttle buggy material transfer vehicle.

Roadtec employed some unconventional, but impressive, inspiration when designing the SP-100e stealth paver. The U.S. Military's stealth aircraft are known for a radical shape and unusual paint that allow them to do things no other planes can do.

The company used a similar strategy to create a paver it claims is unlike any others on the market. The Roadtec stealth paver is designed to reduce operating costs with its limited wear parts and high ft/min paving. The angular design and black paint are designed to pay homage to the planes it emulates.

The 32,360 lb. (14,678 kg) machine is designed to be a low-maintenance, completely gravity-fed paver specifically for operating in conjunction with a Roadtec shuttle buggy material transfer vehicle.

The SP-100e accepts the hot-mix asphalt (HMA) at the top of the machine, where gravity feeds the material through flow gates directly to the auger from the cone-shaped mass flow hopper. Gravity flow eliminates the need for slat conveyors, hopper wings, push rollers and tandem front bogies — and the cost of replacing the wear parts to these components. There is no need for the engine power and fuel consumption to run all of those moving parts. The simple design is intended to reduce maintenance costs and initial purchase price…in other words, cheaper to buy and cheaper to run.

By combining the SP-100e stealth paver gravity fed system with the Roadtec shuttle buggy, it is intended to address several common issues found in conventional asphalt paving. The SP-100e hopper is designed to create further material segregation prevention as the material moves through the machine. Finally, the head of material in front of the augers is automatically controlled by an electronic control system. All taken together, the HMA is expected to be delivered in one smooth motion to provide a uniformly placed mat with consistent density and smoothness.

The solid-rubber wheeled stealth paver is equipped with a Tier IVi, Cummins QSB 6.7 173 hp (129 kW) two-speed hydraulic engine, which operates at 2,200 rpm. This is a smaller engine that uses less fuel. Due to the light weight of the machine, Roadtec engineers were able to derate the engine and provide fuel savings.

The stealth can be operated from either side of the paver. Operator platforms can swing out to provide a line of sight for the machine operator. The machine's controls and display screen move with the seat to allow for safe and convenient machine operation. Operators also sit up high, allowing them to see more of their surroundings.

Greater operator comfort is expected to be achieved through Roadtec's FXS airflow system that creates an air barrier between the back wall of the hopper and the operator. This feature is designed as an air curtain to push the asphalt fumes and heat up and away from the operator platform.

All engine maintenance and inspection areas are designed to be easily reached through access doors on the sides and top of the paver. The hood lifts hydraulically and has a manual-lift back-up feature. The engine compartment is engineered to be roomy enough to make component access possible.

In the end, just like the military stealth aircraft, the Roadtec SP-100e stealth paver is designed to precisely execute its own mission… paving a smooth-finish mat.