Because this bridge is a signature river crossing, the DOT is working with local officials and community leaders to design the aesthetics of the bridge. 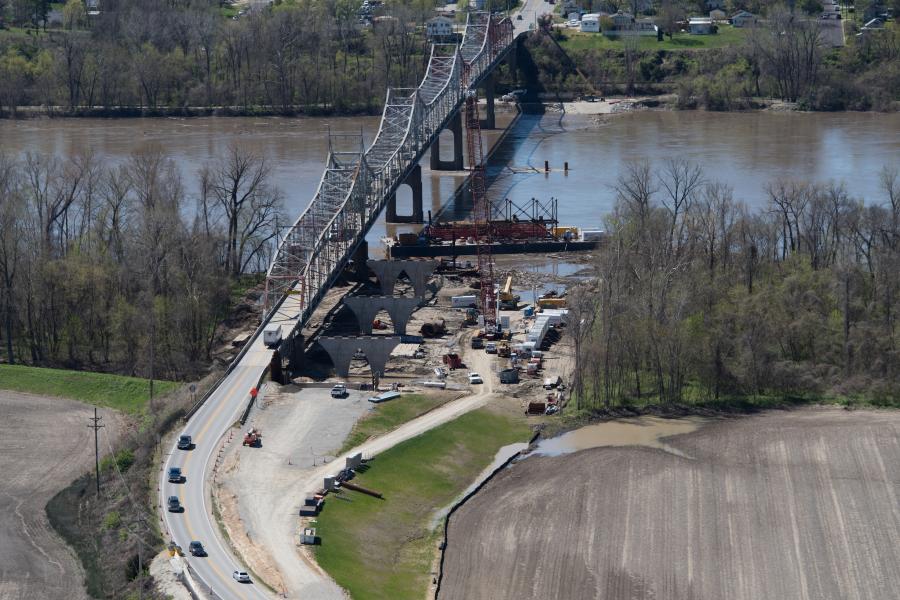 St. Louis-based Alberici Constructors is engaged in a major hometown project — the construction of the new Route 47 Missouri River Bridge, located roughly 75 mi. from Jefferson City and about 50 mi. from St. Louis, which provides a vital link between Warren County to the north and Franklin County to the south.

St. Louis-based Alberici Constructors is engaged in a major hometown project —the construction of the new Route 47 Missouri River Bridge, located roughly 75 mi. from Jefferson City and about 50 mi. from St. Louis, which provides a vital link between Warren County to the north and Franklin County to the south.

The project to replace the Washington bridge, led by the Missouri Department of Transportation, has many partners — the city of Washington, Franklin and Warren counties; the East West Gateway Council of Governments; and the Boonslick Regional Planning Commission.

The work began last summer and should be completed in the summer of 2019, with the bridge to be open to traffic in late 2018. The total cost is $69.2 million, which is being financed by $45.4 million in federal funds, $13.8 million in state and local funds and a TIGER Grant of $10 million.

Alberici is currently planning on subcontracting out the demolition of the current bridge, which has outlived its lifespan.

“The bridge needs to be replaced because of its deteriorating condition,” according to the project web page. “It serves as a vital link for the communities on both sides of the river. The bridge, which opened in 1936, carries about 11,000 vehicles a day. The existing bridge has narrow lanes, no shoulders, restrictive weight limits and requires a regular cycle of rehabilitation work. The new bridge will provide safer and more efficient travel for the many motorists going between Franklin and Warren counties.”

The new bridge is being built upstream, about 50 ft. away and have two 12-ft. lanes and 10-ft. shoulders on each side of the bridge, and a 10-ft. wide protected bike/pedestrian path to make it more user-friendly. Expected bike/ped traffic is anticipated at 5,000 annually.

“In addition to providing a safe and easy connection to the KATY Trail, the new bridge provides connections to several other trails in the area,” said Judy Wagner, MoDOT Franklin/Jefferson County area engineer. “This is the eighth Missouri River crossing in the state with a dedicated bike-ped trail. It's a very special feature of the bridge because it allows people to connect to the beauty of the region and the Missouri River.”

Because this bridge is a signature river crossing, MoDOT is working with local officials and community leaders to design the aesthetics of the bridge, including decorative lighting, railing and decorative columns.

The bridge was designed by HDR.

“The main span of this bridge is a variable depth plate girder bridge but the approach spans are precast concrete girder,” said Wagner. “The great thing about this new bridge is the anticipated life span is 75 to 100 years.”

In terms of traffic impacts, MoDOT noted that off peak lane restrictions are possible and more major impacts are likely once the new bridge is ready to be tied into the existing roadway. The delivery of materials has affected traffic on Route 47 in Warren County to allow the trucks to pull on and off the road. In addition, a section of the Rotary Riverfront Trail in Washington has been closed for the construction.

Thus far, the company has completed the substructure on bents one, two, three and four and have drilled shafts installed on bents five and six. The company is currently working on the shafts on bents seven and eight. The 2017 construction season will have them complete the substructure and erect girders on units one and two, as well as have the deck formed and poured.

“Construction is going great,” said Wagner. “We obviously have challenges, as you always do working on the river, especially with the recent flooding in the region, but so far we haven't faced anything we can't handle. We are always looking for ways to improve things. For example, Alberici Constructors submitted three Value Engineering Proposals to modify the substructure design, including raising the bottom of footing elevations and modifying the foundation design. Those all resulted in cost savings.

“Environmentally, we had to clear some trees before the bats roosted in the trees,” she added. “With that, along with everything else, we are following all permits and procedures outlined in our NEPA document.”

The bridge consists of 10 piers and nine spans.

The crews are working day shifts, with an average of 50 Alberici and subcontractor personnel on-site.

The new bridge will be built using 4,500 cu. yds. of concrete for the deck and 7,400 cu. yds. for the remainder of the bridge. The bridge also will have 5,781 tons of structural steel and three million lbs. of reinforcing steel.

“Because this bridge is being built so close to the existing one there is limited work space,” said Wagner. “MoDOT acquired temporary construction easements to facilitate the contractor and allow them to store equipment and have easier access.”

Alberici has assembled a fair amount of equipment for the project, including: cranes, barges and tugboats, as well as a large fleet of drilling equipment for the drilled shafts and rock sockets. In addition they are using excavators, dozers and haul trucks.

While MoDOT has several bridge projects ongoing, each one provides an opportunity for MoDOT and the contracting firms to hone their skills and be more efficient.

“One of the great things about this project and the town it's being built in is that people really do care,” said Wagner. “This bridge is important to them, it means something to them and to us. We have upwards of 75 people working on this project between field personnel and office staff and one of the great things is that we have been bringing in MoDOT employees who are from the region to work in the bridge. It gives them a chance to work on something that will mean so much to their community.”