A $1 billion replacement and upgrade of Doyle Drive in San Francisco came out of necessity. 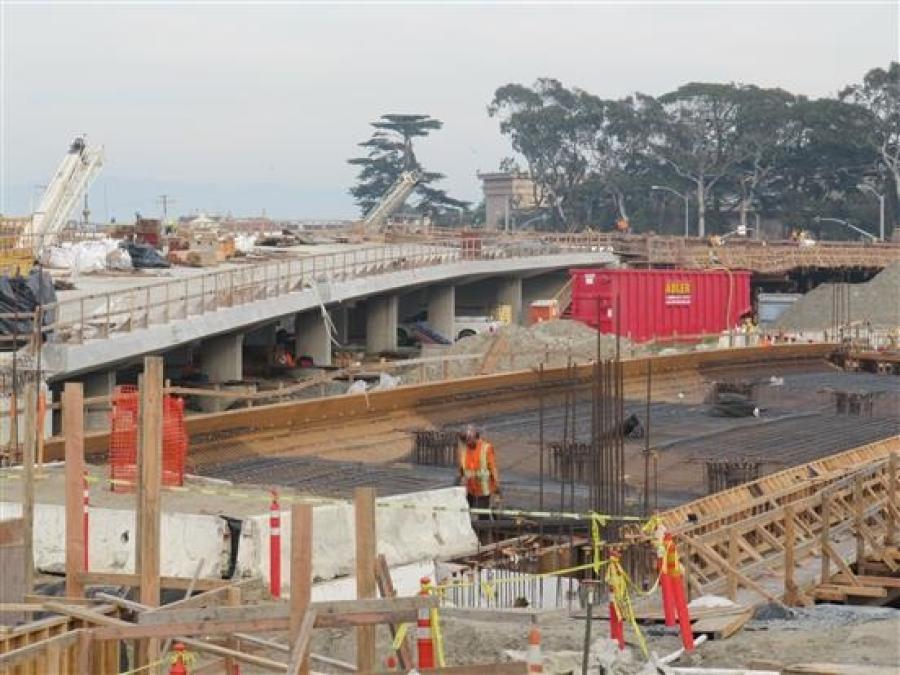 A $1 billion replacement and upgrade of Doyle Drive in San Francisco came out of necessity: it was structurally and seismically deficient.

A $1 billion replacement and upgrade of Doyle Drive in San Francisco came out of necessity: it was structurally and seismically deficient.

But the work, now in its second and final phase, also provided an opportunity for project designers to plan major improvements, including an environmentally-friendly design.

Designers also wanted to enhance the beauty of the area.

“In addition to bringing Doyle Drive up to current seismic safety standards, we also were given the opportunity to design a roadway that reflected the natural beauty of the Presidio, Golden Gate National Recreation Area and the Golden Gate Bridge,” said Caltrans Director Malcolm Dougherty, in a release.

Doyle Drive or Route 101 serves as the south access to the Golden Gate Bridge. It winds 1.5 mi. (2.4 km) along the northern edge of San Francisco.

Although work continues, workers opened the new Doyle Drive to traffic in mid-July of this year. Some of the final elements of the project, set for completion in late 2016, include barrier rail installation, landscaping and reestablishing local roads that had been cut off by the Doyle Drive construction.

One such street is Halleck Street, which now crosses above a tunnel portion of Doyle Drive.

“Local roads are being restored,” she said. “We are finalizing work on surrounding areas including parking lots.”

Some major ramps to Doyle Drive also had to be closed briefly during mid-summer to allow for construction.

The project area extends from the Golden Gate Bridge Toll Plaza on the west, to Broderick Street on the east and includes Richardson Avenue, Gorgas Avenue and Marina Boulevard.

The new roadway will serve the same traffic capacity as the former route. But it will minimize traffic impacts on local roads by providing direct access to the Presidio.

Trees removed for construction will be replaced with young and more diverse tree varieties.

Originally constructed in 1936, engineers determined that Doyle Drive had reached the end of its useful life. In April of 2012, workers shifted traffic onto a seismically-safe temporary bypass that would handle traffic until completion of the new Doyle Drive.

Graham said the project will have a positive impact on the surrounding area. The tunnel sections of the project will allow for 13 additional acres of park space above the tunnels, she said.

“Safety on Doyle Drive also will be enhanced,” Graham said.

North and south traffic will now be separated by a barrier. “There will be no head-on collisions,” she said.

Also drivers on Doyle Drive will have direct access to The Presidio from Highway 101.

In addition, roads for bicycling and walking have been improved.

Although contractors refer to the new roadway as Presidio Parkway, it will continue to be Doyle Drive on signs and maps.

Doyle Drive will create a regional gateway between the Golden Gate Bridge and the city of San Francisco. The project team envisioned a roadway that would reduce impacts to biological, cultural and natural resources within a national park and national landmark district.

The team also wanted a project that would meet community needs including construction of a safer roadway.

Workers completed Phase I of the project in 2012. It included construction of the southbound High Viaduct, southbound Battery Tunnel and a temporary bypass.

Funding for the project is from a number of sources including federal grants, American Recovery and Reinvestment Act, State Highway Operations and Preservation Program State Highway Account and Proposition K sales tax.

C.C. Myers Inc., a Rancho Cordova, Calif.-based construction company specializing in building highways and bridges, was the contractor for Phase I of the project that included a replacement bridge on Highway 1 north of the MacArthur tunnel, the new southbound Presidio Viaduct, the first of four short tunnels and the southbound Battery Tunnel. C.C. Myers bid $496.3 million for the work. It was the low bid.

Golden Link Concessionaire of San Francisco was selected contractor for Phase II that includes design, construction and finance of the northbound Presidio Viaduct, Battery Tunnel, the Main Post Tunnels and the new Girard Road Interchange with a direct connection to the Presidio. Extensive landscaping also is part of the project.

In addition, workers will construct new on- and off-ramps to the Presidio and Marina Boulevard.

Golden Link Concessionaire, which bid $360.5 million for the Phase II work, will operate and maintain the project for 30 years.

With operation and maintenance added, total project costs for both phases comes close to the $1 billion figure, Graham said.

The arrangement is described as a public-private partnership, which did not require acceptance of the lowest bid.

Along with the primary contractors, the project required multiple subcontractors of all trades, Graham said.

About 250 workers were on the job during the peak of the project.

One subcontractor, Ferma Corp. of Mountain View, Calif., had the job of tearing down about a mi. of Doyle Drive over one weekend in August of 2012.

“The timeframe is what made this difficult,” said Marc Ferrari, president of Ferma Corp., following the demolition.

Giant excavators and special attachments helped in the process. Ferma Corp. used various attachments to the excavators including metal shears and pavement breakers. The shears were able to demolish concrete columns quickly.

Doyle Drive construction commenced following the demolition with a requirement to use 12-ft. (3.65 m) diameter piles as a foundation for the elevated roadway.

To prevent damage to historic buildings in the Presidio, the piles had to be inserted into the ground with limited vibration. It meant that workers could not use a pile driver with an impact hammer.

Graham said one of the other major challenges of the Doyle Drive project was to rebuild the roadway in a tight space while providing access to Golden Gate National Recreation Area. The project team was successful in maintaining the beauty and access to a national park that attracts 10 million visitors a year, Graham said.

The team designed the roadway so it would be tucked into the natural contours of the Presidio and the Golden Gate National Recreation Area. And ramps are provided to reach both destinations.

Work on Doyle Drive is proceeding on a 7 a.m. to 7 p.m. schedule Monday through Friday and from 9 a.m. to 6 p.m. on Saturday. Sunday work is done on an occasional basis and night work is conducted as needed.

“It's mostly daytime work,” Graham said. “But there are some double shifts.”