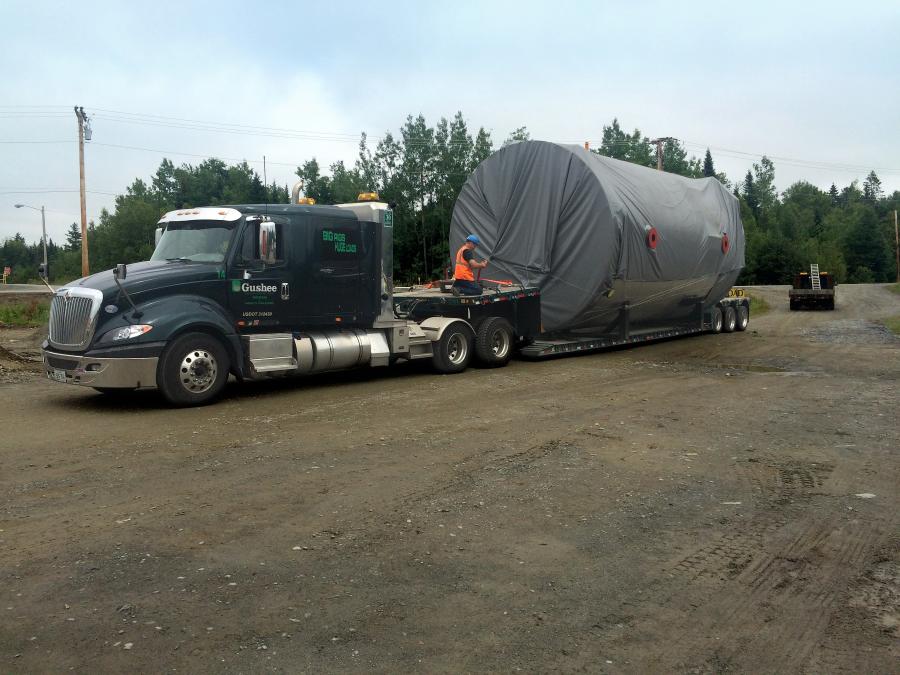 Since it was established in 1983, many industrial companies in the United States and Canada have come to trust Gushee’s for its ability to move anything and everything — even large complex loads.

Trailers are one of the most crucial products in the marketplace because of their ability to take anything from point A to point B, no matter the industry. They are largely underappreciated because they are simply the transportation vehicles, not the end product. However, to companies like Gushee's Rigging & Heavy Hauling in New Gloucester, Maine, trailers are their lifelines and what has kept their business succeeding over the long haul, quite literally.

Since it was established in 1983, many industrial companies in the United States and Canada have come to trust Gushee's for its ability to move anything and everything — even large complex loads. For instance, it recently transported an industrial boiler to a customer despite some unique challenges. Whatever machine the heavy hauling company moves is typically a very expensive and vital piece of the customer's business. Just having it show up damage-free is sufficient, but Gushee's delivers the load in a safe and timely manner as well.

“We have been around for 32 years so we have the expertise as riggers to safely move, load and haul just about anything from the smallest of machine tools to the largest of industrial machinery and equipment,” said Daryl Gushee, owner and founder of Gushee's Rigging & Heavy Hauling. “We haul many diverse loads, so our trailers really are crucial to our success, which is why we have many different options.”

Completing moves in a short amount of time is not an easy thing to do on the East Coast. This is because the eastern United States has more law restrictions surrounding transportation than other parts of the country regarding height, width, and weight constrictions, primarily due to the low bridges and aging infrastructure.

Standard legal transportation height is 13 ft. 6 in. in New England, and once a load gets taller than that, it takes considerably more effort to plan the route to avoid areas with lower infrastructure. Even with over height loads, keeping the height as low as possible provides the operators additional route options, which can save significant transport time.

While Gushee features more than 30 trailers in its lineup, the company relies on XL Specialized Trailers, a manufacturer of custom-engineered heavy haul trailers, to meet its heavy hauling needs. According to Gushee, XL Specialized Trailers are very dependable and have added features on its trailers that other trailer manufacturers do not. Most recently, it added the XL 60 mini-deck lowboy to its lineup, which has a capacity of 60,000 lbs. overall, and a unique three beam design, which facilitates a loaded deck height of 12 in. with 4 in. of ground clearance. The mini-deck clears low bridges without sacrificing strength, and adheres to the East Coast bridge laws.

The XL 60 turned out to be valuable for Gushee recently when it needed to haul an industrial boiler to a customer. The boiler was moved from the port at Searsport, Maine, to Main Woods Pellet Company in Athens, Maine. It was a difficult load with a width of 17 ft. 5 in. and height of 18 ft. when loaded. The boiler also was very heavy, giving the trailer all it could handle with a maximum-capacity load.

The boiler was eventually transported in August after six weeks of route preparation and planning. There were more than 25 vehicles in the convoy, which included four state police escorts, four pilot cars and line crews with bucket trucks from several different utility companies (if they entered their jurisdiction along the way). Anticipating eight hours of transport time, Gushee was just under its estimated time, moving the boiler a total of 104 miles.

“If we would have put that boiler on any of our other lowboy trailers, we would have been well above 18 feet and if you do that, you are asking for trouble,” Gushee said. “In reality, even 15 feet is high especially on the East Coast. We do not have anything else close to how low to the ground the XL 60 is. Every inch over what the XL deck allowed us would have brought complications to this job. The XL trailer was absolutely crucial in this move and it handled the load very well. We were able to deliver the boiler on time without incident and all overhead wires were left intact.”

When it comes to heavy hauling, Gushee is a solutions leader, always saying yes to a customer in need no matter the load, and the industrial boiler was no exception. Always doing right by the customer and having the fleet of trailers to back it up has proven to be a winning combination for 32 years.

In the case of Gushee's Rigging & Heavy Hauling, its strong fleet and diverse lineup of trailers has not only taken customers' machinery and products from point A to point B, but has also helped position the company as a leader in the field.