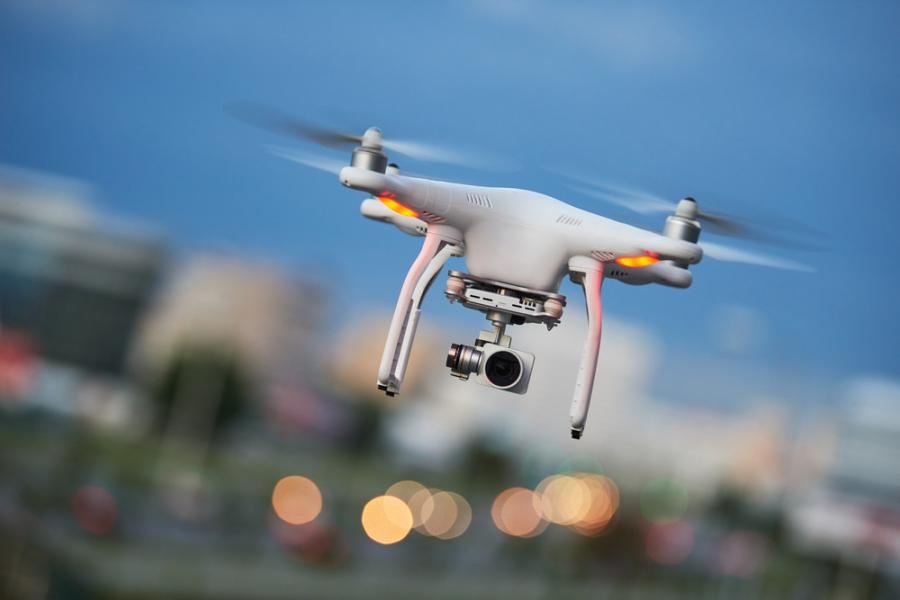 MEDFORD LAKES, N.J. (AP) There's a tree in the field behind Jon Moraglia's house that still has a drone stuck in a branch at the top.

It's been up there for about four years. That's back when he was playing around with toy drones.

Now the 18-year-old takes drones very seriously. In fact, he started his own company called The Drone Life two years ago and business is booming.

The 2019 Shawnee High School graduate is working his business full-time now since graduating from high school. He regularly works with engineers, construction companies and real estate companies and he loves every minute of it.

"I started just as a hobbyist," Moraglia said recently standing in the driveway of his family home. "First off, I thought drones were super cool. I had some toy ones I got that were super cheap. I kept on buying them, I kept on crashing them ... Then I got a more expensive one."

His dad, Michael, worked in the mortgage industry for a long time and often met with real estate companies and made a suggestion for his son.

"He thought ‘why don't you take the drone and film this house that was for sale'," Moraglia recalled. "It was like 40 acres, it was a big property. I did that and it turned out really nice. I kept on doing it. I realized, this is a new industry. There's hardly any businesses out there, especially in this area, who do this. It was really this niche market that I was able to get into. It's been paying off pretty well."

When Moraglia was nine years old he came up with the idea of building a mini-golf complex in the backyard of his family home. Jon's Mini Golf was created.

"I've done a lot of stuff," he said. "The mini-golf I started when I was nine. I get trash and stuff people donate to me and then I make the whole mini-golf course in my backyard. It's a dollar to play and the kids and the families all around come every day to play it. This year was my last year building it and having it run in my backyard. I'm going to be focusing on my drone business full-time."

His father saw the entrepreneurial spirit in his son many years ago and it's only continued to grow from there.

"I've seen it for many years with the golf course, lemonade stands, shoveling snow, cutting lawns, everything, he's all about wanting to make money," his father said. "It's great. We love it. He's got such a drive. He'll get up and cut our lawn without even asking. He's not the normal kid that just sits around. He wants to get out and do things."

"Last summer, I learned how to fix some stuff on cars," said Jon Moraglia, who has two older siblings. "You know how car headlights get yellowish over time? There's actually a way to clean it. Last summer I did around 100 cars for $50 each. I do a variety of different things. All of them completely unrelated to the other."

Moraglia said he learns a lot of things by watching YouTube. He's taught himself a lot about drones that way and many other things.

But it takes hard work and sacrifice as well.

"You have to work hard for what you want," he said. "There are lots of sacrifices you have to make. I'm sitting in my room all the time learning things. I've lost a lot of friends. My family is supportive of what I do, but I know there are other people out there who their families don't think they should start a business, ‘it's too much money, you need to go to school and be a doctor'. Try to do whatever you want to do in life I would say."

Moraglia received his FAA Drone License a few years ago so he could fly drones commercially.

Participants must be at least 16, have to pass an aeronautical knowledge test, must apply for and obtain a remote pilot certificate and must pass a background check by the Transportation Security Administration.

"I got that in May of 2017, I think," he said. "You need to go through training and testing with the FAA to be able to fly drones commercially. You need to go through this entire course and learn about all these aeronautical things as if I was going to fly an airplane. A lot of the stuff is not relevant to drones but you still have to learn it."

Before he flies his drones, he has to check various apps which show if there are flight restrictions in the areas he will be flying the drones.

"Recently at the Flying W, there was a temporary flight restriction because they were having an air show," he said. "That was within 15 miles or something. Usually around here, there's no restrictions for flying drones. On that day, there was. If I had a job, I would've had to cancel it.

"You have to know what you're doing if you want to fly for money and get paid. Before I go to a job, every single time I have to check the apps that I have to check the air traffic and the patterns. Could be areas where I'm flying near a military base, an airport, or a temporary flight restriction like if there's a Phillies game going on. You can't fly around those. You have to always keep updated and make sure you're flying legally and safely.”

He mainly films in South Jersey but has done jobs in Maryland and Philadelphia.

"Around the area if people need jobs, like I said, there's not that many companies that are doing this," he said. "I'm on the forefront of this new industry."

One project Moraglia is particularly proud of is the work he did to help save an eroding island in Ocean City called Shooting Island.

He was contracted to use his drone to shoot aerial footage of the marshy island. The video and photos were used in support of New Jersey Department of Environmental Protection and U.S. Army Corps of Engineers permit applications, which were ultimately approved.

"Around a year and a half ago, I did a shoot in Ocean City, New Jersey," he recalled. "We were filming Shooting Island. It's a marshy island right off the bay. It was deteriorating really quickly. Waves coming in were bashing against it. You could see big chunks falling off into the water.

"There's lots of wildlife on that piece of land, too," he said. "They wanted to use the drone to film the island and show how it was deteriorating. It's a marshland so no one can walk in there and film. You can use a boat but you can't get the full perspective."

He said a whole survey video of the island was created.

"They ended up getting $2.2 million to save the island," he said. "Now there's rocks all over it so the waves hit the rocks now. I thought that was super cool. That was amazing that I was able to be a part of something that big and make a huge difference."