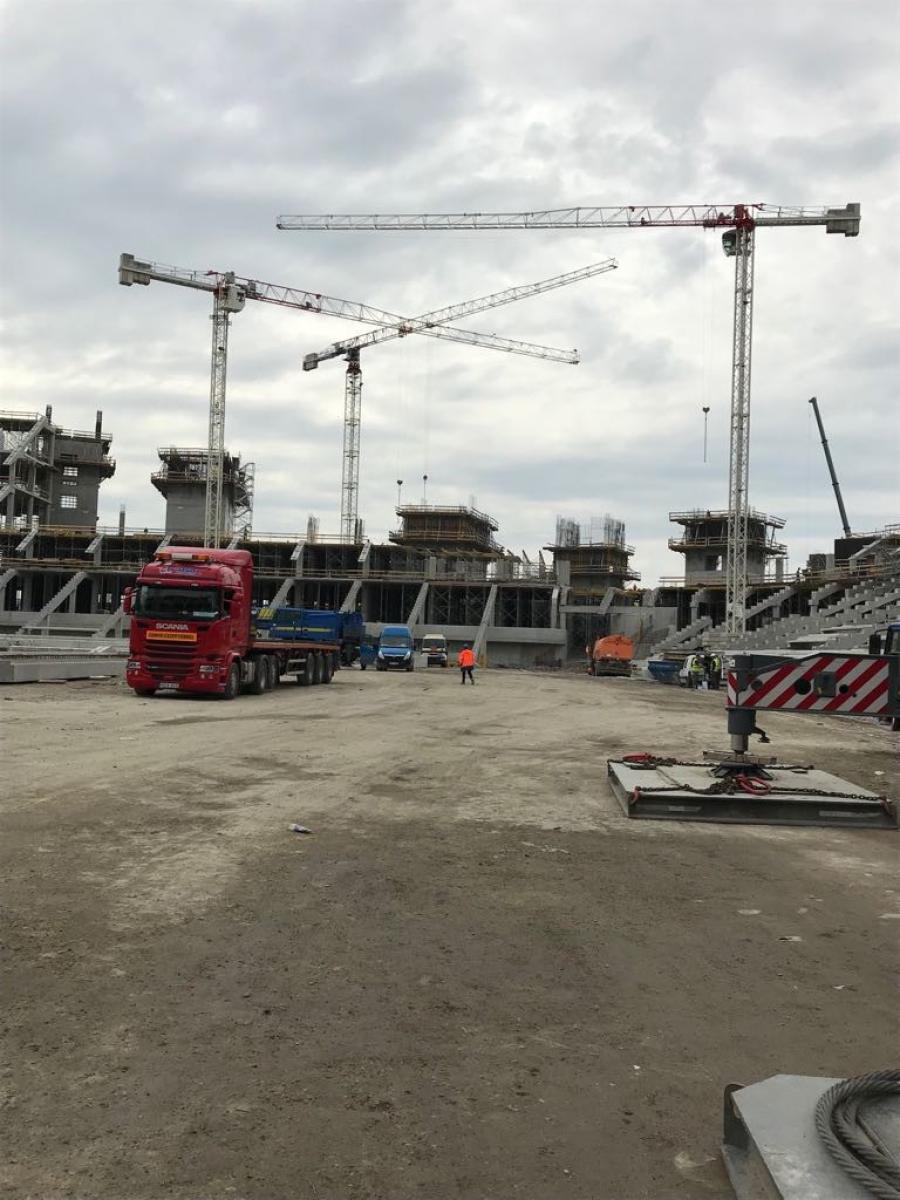 In order to ensure that the ambitious schedule works, there are 15 tower cranes at the work site.

Work on the new Ferenc Puskás Stadium in Budapest has been going on since the beginning of 2017. The soccer stadium is being built at the exact same spot as its predecessor of the same name, which was built in 1953 and torn down in 2016. The construction work is scheduled to be completed in November 2019, at which point the stadium will be able to accommodate 67,000 spectators with its length of more than 984 ft. and height of up to 164 ft. In order to ensure that the ambitious schedule works, there are 15 tower cranes at the work site. Most of them are Terex models owned by Hungarian crane rental company TDH Toronydaru Kft., and are being assisted by a number of machines, including a Demag CC 6800-1 crawler crane owned by Sarens.

The list of Terex tower cranes being used is long: The range extends from the GTS 511B, through the CTT 91-2.5 and the CTT 91-5, all the way to the CTT 181 and the CTT 331. When asked why this manufacturer in particular is so heavily represented, TDH Toronydaru Technical Manager Sandor Zubor said: "On one hand, the Terex tower cranes were perfect for the work site requirements in terms of their heights and lifting capacities; on the other, there are very few cranes of comparable size in Hungary that could have properly tackled the work that needs to be done at the site."

The fact that the TDH location was close to the work site proved to be a logistical advantage when selecting the cranes. This meant that only half an hour was needed to cover the 7.5 miles of distance between them.

"Nevertheless, we still needed a total of about 80 to 100 truck runs to get all cranes to the site," TDH General Manager Oliver Vonhauser said.

When setting up the cranes for the two largest construction companies involved — Magyar Építő and ZÁÉV — the Terex cranes' ease of assembly proved to be a boon for the THD team, which had anywhere from 12 to 14 people, depending on the specific unit. Smaller cranes such as the CTT 91 were erected in one single day, and the experienced team only needed three to four days for the larger CTT 331 models.

The logistics involved in transporting the Demag CC 6800-1 crawler crane were significantly more complex, as it had to be taken from its previous work site in Peru to Antwerp by ship, and from there to Budapest by road. The overseas trip itself took 25 days. It would then take another two weeks to set up the crane at the site, with the corresponding work including paving the ground where needed, assembling the Superlift system, and preparing the SPMT modules that would be required as well. The main challenge involved in the setup process was the fact that the Sarens team had to deal with confined spaces available at the work site during crane setup. 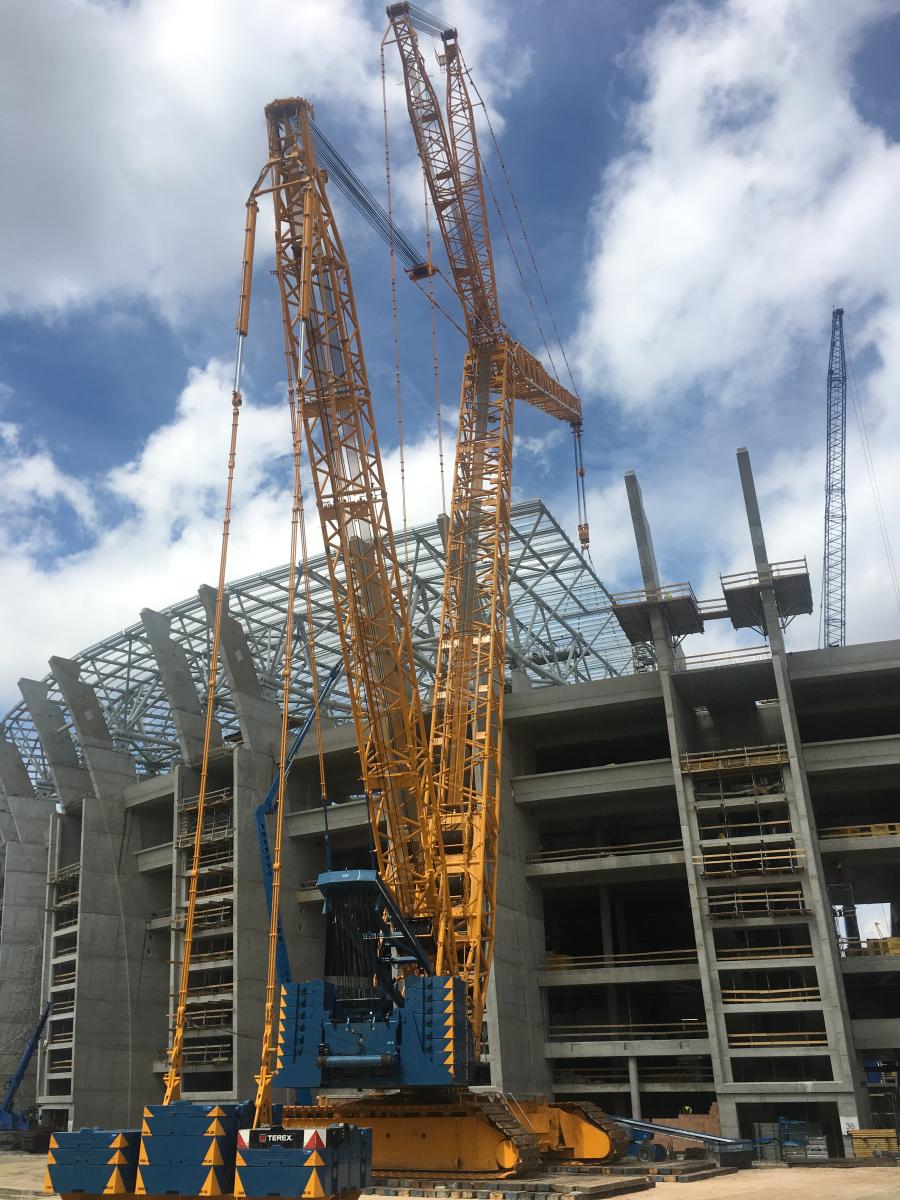 The Terex tower cranes were set up with hook heights ranging from just under 105 ft. to 279 ft. in order to make sure that they would be able to perfectly take care of their work, completely covering the required lift spectrum. Most of the cranes are set on foundation anchors, although some are mounted on an undercarriage.

"The challenge when working with so many cranes at a work site this big is to be able to coordinate them so that the work goes smoothly instead of bottlenecking the actions on the job site," said Tibor Major, who helped with the preparations for the project. In particular, coordinating with the mobile cranes requires an extremely precise and conscientious approach, but it is nothing that the experienced TDH Toronydaru Kft. team cannot handle.

"Needless to say, the fact that the operators of the Terex tower cranes and the Demag crawler crane are able to communicate well with each other is extremely advantageous," said Peter Nagy, who is part of the TDH sales team. In addition, the fact that all the tower cranes used are equipped with inverter drive technology also makes it much easier to coordinate them in terms of working speed and maneuverability.

Everything Is Going According to Plan

With these features, the cranes have proven to be able to tackle their demanding work quickly, safely, and reliably. And the work is not only demanding, but also extremely varied: It ranges from lifting concrete buckets and rebar to installing prefabricated steel and concrete elements.

"So far, everything's going perfectly smoothly. In fact, we're pretty sure that our cranes will be able to complete their work at the site by February 2019, i.e., right on schedule," Oliver Vonhauser said. On top of this, the Demag CC 6800-1 is playing its part as well, and will have lifted a total of 75 steel structures for the roof. In other words, soccer fans all over Europe can start looking forward to the Euro 2020 games that will be played at the new Ferenc Puskás Stadium and know that Terex and Demag are playing a part in making it all a reality.