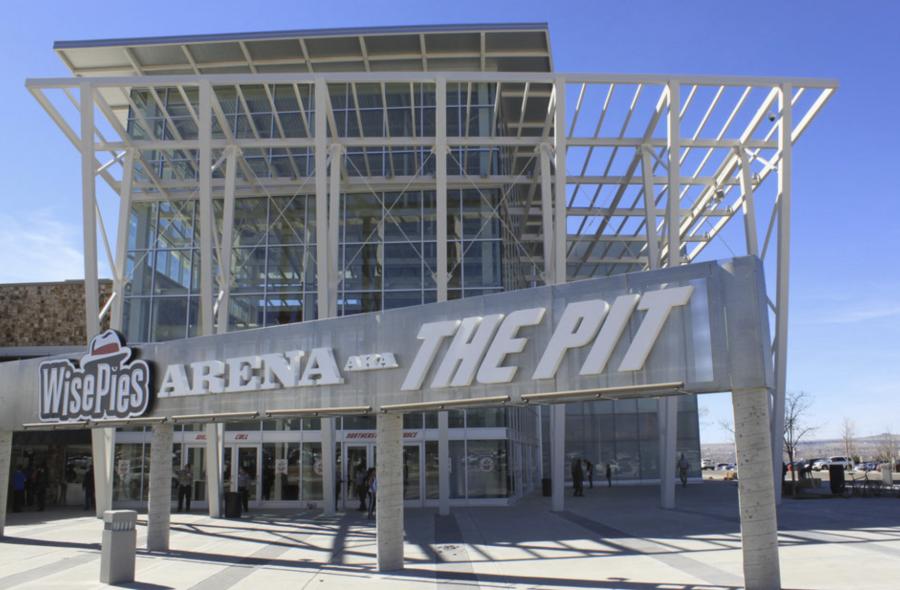 East side of the university's famed basketball arena which is referred to as "the Pit".

The University of New Mexico's legendary basketball arena, a mid-century fixture that was modernized as part of a multimillion-dollar renovation a few years ago, is being recognized by the U.S. Green Building Council.

Built in 1966, The Pit is one of college basketball's most famous — and loudest — buildings. Now, the council has included the arena in a report showcasing some of the most impressive sporting venues, convention centers and other public gathering spaces that have transformed their environmental footprint.

Since renovations were completed in 2010, The Pit has boosted its water savings by nearly 50 percent and energy savings has been calculated at more than 20 percent. By preserving much of the existing building, construction waste was limited and nearly all of the materials from the demolition were recycled.

John Pate of MolzenCorbin , the architecture firm hired for the renovation, called The Pit one of the most unique sporting venues in the world. Its sunken court has attracted more than 13 million fans over five decades.

“Saving the building from demolition while preserving its cherished atmosphere set up conditions to accomplish the most sustainable of design and construction efforts: reimagining an exciting sports venue, reusing all that was good and integrating new, sustainable technologies,” Pate said in a statement.

The Green Building Council has estimated that buildings certified under the Leadership in Energy and Environmental Design program, or LEED, can save more than $2 billion in combined energy, water and maintenance savings over a three-year period.

As for collegiate sports programs, the council contends that they have the ability to reach the largest and most diverse audiences through their commitments to greener practices. So far, more than 3,700 higher education projects across the country, including sporting venues, are LEED-certified.

The University of North Texas' stadium, Middlebury's field house with its competition track and synthetic turf infield and UC-Berkeley's California Memorial Stadium also were highlighted in the report, along with performing art centers in Louisiana, New York and Pennsylvania.

In Albuquerque, fans are greeted by a modern skin of steel and glass that envelops what was once an aging and inefficient building. On the north and east sides, high glass walls offer views of downtown and the Sandia Mountains.

With the playing surface 37 ft. below street level, the building used to look more like a warehouse when viewed from outside.

The Pit hosted the 1983 Final Four as well as numerous regional and early-round NCAA competitions over the years.