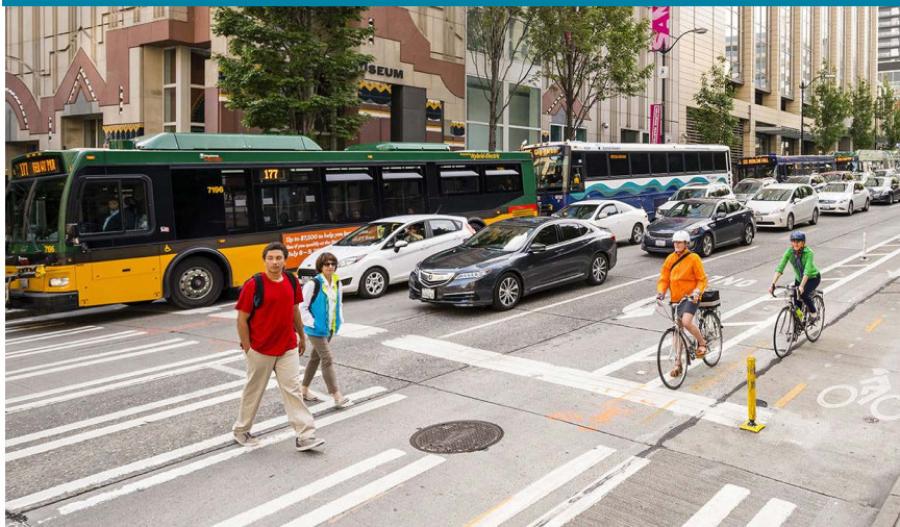 Despite the increase in transportation funding provided by the passage of the bipartisan Infrastructure Investment and Jobs Act (IIJA) in November 2021, the nation's roads, bridges and transit systems remain significantly underfunded and will require increased investment for needed improvements and repairs.

Fees on highway users continue to be a critical source of funding for the preservation and improvement of the nation's interstate highway system, other critical roads and bridges eligible for federal-aid, and the nation's public transit systems.

The federal Highway Trust Fund (HTF) is the primary source of revenue for the IIJA and receives its revenues exclusively from highway user fees — taxes on motor fuels and other specified motorist purchases — and from interest on its existing balance (owed by the federal government on money borrowed from the Trust Fund). The HTF is deficit proof, financing road, bridge and transit improvements on a pay-as-you-go basis.

The federal motor fuel tax is 18.4 cents per gallon for gasoline and 24.4 cents per-gallon for diesel fuel. It has been increased five times since 1956, with the most recent increase in 1997.

A new report released Mar. 24 by TRIP, a Washington, D.C.-based national transportation research nonprofit, evaluates the condition, use and funding of the nation's system of roads, bridges and transit. The TRIP report, "Funding America's Transportation System," finds that, as vehicle travel reaches pre-pandemic levels, 40 percent of the nation's major roads are in poor or mediocre condition, and 7 percent of bridges are rated in poor/structurally deficient condition. The report also finds that traffic fatality rates are the highest in a decade, 42 percent of the nation's busiest roads experience congestion during peak travel times, and one-fifth of transit vehicles have met or exceeded their useful service life.

The IIJA will provide a significant boost in federal investment in roads, bridges and transit and offers an opportunity for the nation to make progress in improving the safety, reliability and condition of the transportation system. The IIJA will provide $454 billion over the five-year period from 2022 to 2026 for investment in highways and transit, resulting in a 38 percent increase in federal investment in 2022. The report's Appendix includes the total revenue each state will receive over the next five years as a result of the IIJA, and the percentage increase in 2022.

As U.S. vehicle miles of travel (VMT) return to pre-COVID-19 levels, the nation's highways are again congested, hindering the movement of people and goods. Overall VMT bottomed out in April 2020 at a level 40 percent below April 2019. By December 2021, U.S. VMT was just one percent below December 2019 levels (the most recent pre-COVID December), and VMT rates in 24 states now exceed pre-pandemic levels. Forty-two percent of the nation's Interstates, freeways and expressways experience congestion during peak travel times, robbing commuters of time and money and imposing increased costs on businesses, shippers and manufacturers. The report's Appendix includes the rate of VMT change in each state from December 2019 to December 2021 and the share of Interstates, freeways and expressways in each state that are considered congested during peak travel times.

The nation's 2,250 transit systems provide access to employment, education, health care, shopping, recreation and social activities. In 2020, 20 percent of transit vehicles, including buses, rail cars and demand response vehicles, had met or exceeded their useful service life. Included in the report's Appendix is the share of transit vehicles exceeding their service life in each state.

In order to improve the condition and performance of the nation's network of roads, highways, bridges and transit systems, a significant increase in investment levels will be required to offset the large backlog in needed funding.

"Additional federal funding from the IIJA will help the U.S. move forward with needed improvements to the nation's roads, bridges and transit systems that will enhance their condition, safety and efficiency," said Dave Kearby, TRIP's executive director. "Even with this significant boost in funding, the system remains significantly underfunded and will require increased, reliable and sustained investment to meet the transportation and economic goals of the 21st century."