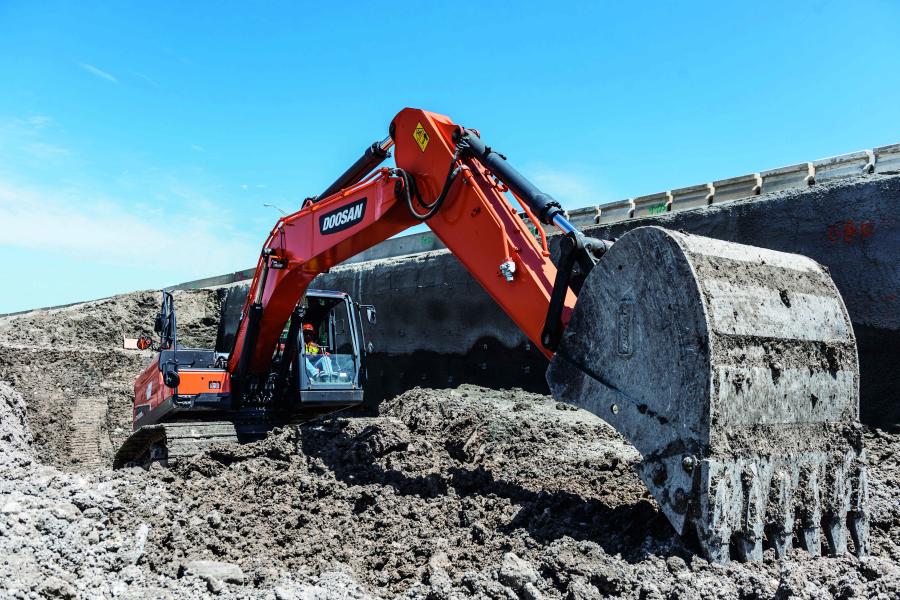 One benefit to owning and operating only one brand of excavators and wheel loaders is the consistency and familiarity for the operators.

Oscar Orduño could have easily followed in his father's footsteps by working in the bakery business. After all, Orduño came from a family of bakers. Both his grandfather and father owned bakeries in Mexico, and Orduño was destined to do the same. But the well-worn path wasn't for him. Today he's the owner of a successful construction company, with 180 employees, working in the Dallas-Fort Worth area — one of the fastest-growing metropolitan areas in the United States.

After his parents sent him to Texas to live with an aunt, Orduño learned to speak fluent English, graduated from high school and enrolled at the University of Texas at Arlington School of Architecture. Two years into college, a good friend told Orduño about a degree program that caught Orduño's attention — construction management.

“My friend told me what I could do with a degree in construction management,” Orduño said. “He took me to a job site, and I realized that was truly what I wanted to do. Ever since I was a kid, I always wanted to build things.”

It wasn't long after that Orduño transferred to Sam Houston State University in Huntsville, Texas, where he completed a bachelor's degree in construction management in 2005. That move set off a series of events that changed Orduño s life and opened new doors in the construction world.

After signing on with a local general contractor, Orduño's first project was supervising and managing the construction of a new Home Depot store in Houston. From there he went on to become a senior project manager for Craig Olden, a division of Hayward Baker. He gained valuable experience in temporary and permanent earth retention systems. He then took that knowledge and started his own company — Oscar Orduño Inc. — in 2014.

“I've always wanted to have my own company,” he said. “The first six months to a year were very tough. I have a special affection for the guys that joined me when I had six months into the business. It's a family-oriented business. Our employees have bonded together as a group.”

Many of Orduño's earth retention projects are for underground parking structures and support for high-rise buildings with underground structures.

“There are only a few companies based in Texas that can do the type of work we do — construction of underground structures on the commercial side, and temporary retention systems for highway expansions and bridge constructions,” he said.

The company builds permanent retaining walls, too. Many of the construction projects are located in the expanding Dallas and Austin areas, and Orduño routinely has 16 projects in progress at any given time. After just three years in business, his company has already completed 50 projects with more than 100 projects in progress.

One of the first pieces of equipment Orduño needed for earth retention projects was a specialty drill attachment powered by the hydraulics on a Doosan crawler excavator. Orduño turned to a company called REV Drill, coincidentally a large purchaser of Doosan excavators, to rent one of its drills and a Doosan excavator. This was his first experience with the equipment brand, and it made such an impression on him that today it's the only brand of crawler excavator in his fleet.

“I received a lot of great feedback from our operators and our superintendents about the Doosan equipment,” he said. “We were pleased with the hydraulic performance from Doosan machines.”

Orduño's business quickly took off. Shortly after he rented and eventually purchased his first Doosan excavator, he needed a second machine, then a third and so on. In 2015, Orduño initiated a relationship with the local Doosan dealer, R.B. Everett, and in just three years, Oscar Orduño Inc. has purchased 32 Doosan machines — a combination of crawler excavators and wheel loaders — making him one of the largest, if not the largest, individual owner of Doosan equipment in North America. His primary machines are the DX225LC-3 and DX225LC-5 crawler excavators, however, last year he purchased three DX140LC-5 excavators.

“During the transition to the '-5' version, the hydraulic performance of the DX140LC-5 excavators was boosted and it allows us to use the smaller machines to accomplish much of the same work done by the larger DX225LC-5,” he explained.

In addition to the crawler excavators, the company owns a variety of Doosan wheel loaders, including tool carrier iterations, for jobsite support. He said the wheel loaders, fitted with a quick coupler and paired with a bucket or pallet fork, are instrumental in moving materials around the job sites and are doing dirt work that was previously outsourced to other companies.

“There are some projects where our clients have asked us to perform the excavation and pile the material that gets removed from the job site,” he said. “Having our Doosan wheel loaders allows us to take care of those needs. It's a big advantage. We're able to not only do what's needed for our retention work, but we can perform work previously done by other companies. It's a cost savings and a time savings for the clients and us.”

“My Doosan equipment performs very well, especially for the type of work we do,” he said. “My excavator operators tell me the machines are fast, and speed is important for our production. Plus, the Doosan wheel loaders have the lifting capacity and speed we need to load and unload our materials quickly. I don't see a need for switching brands because the performance of the Doosan equipment is excellent for us.”

Another benefit to owning and operating only one brand of excavators and wheel loaders is the consistency and familiarity for the operators. It's much simpler for an operator to transition from one job site to the next when the machines are all the same brand and function similarly.

“My operators can go from one job site to another and use the same type of machine,” Orduño said. “That minimizes them not knowing how to properly operate the equipment. That's another advantage of being consistent with the Doosan brand.”

“Doosan and R.B. Everett have been a big part of our ability to grow,” Orduño said. “It's difficult for startup companies to get this level of commitment or support from an equipment dealer. I feel like they're a partner to us and they have shown that throughout our relationship.”

In fact, as Orduño's construction equipment inventory increased, the dealership's service department ramped up with additional mechanics, even allocating one mechanic almost exclusively to Orduño's business.

“If we need help, they'll be there within the same day, sometimes within hours,” Orduño said. “Stopping, for us, is like any other company — you're losing production and you're losing revenue. Having a dealer that can respond to issues immediately is critical to our success on schedule-driven projects.”

In addition to parts and service support, the dealer has worked with Orduño and his staff on training opportunities. Employees have visited the dealership for equipment training sessions, and R.B. Everett staff even helped Orduño's safety manager develop specific training materials for the company's Doosan machines, based on the material presented in the operation and maintenance manual.

Keeping life in balance is paramount to Orduño, and he can do that with the help of his Doosan equipment. He doesn't let himself get overburdened with the stresses of owning a large construction firm. Instead, he makes a point of including personal fitness and exercise in his daily routine. While he chose a different career path than the family tradition, Orduño still helps his wife, Odette, run the bakery to take his mind off his construction projects.