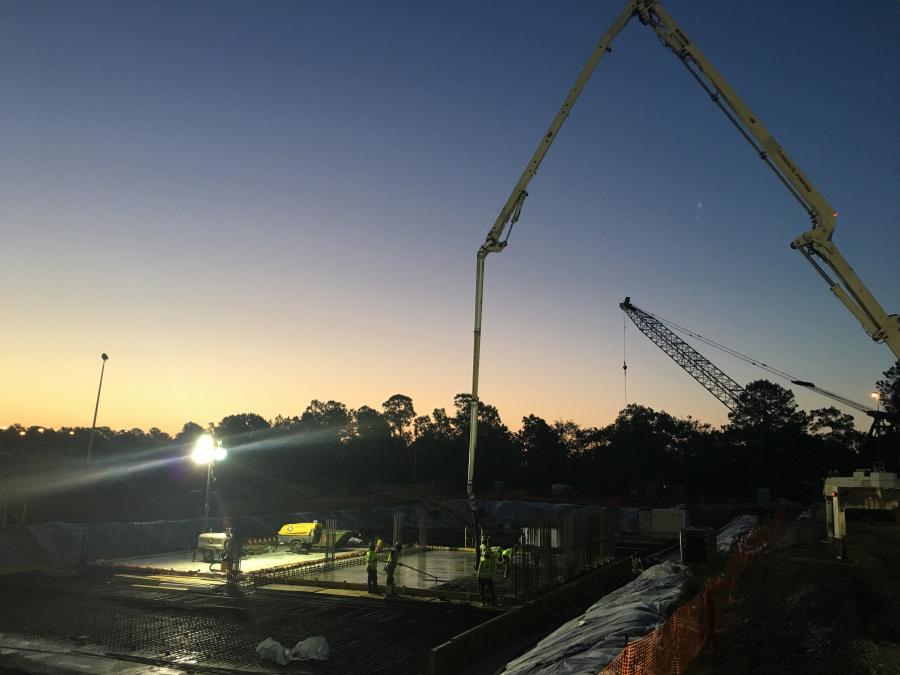 The vibrant communities in and around Charleston, S.C., are seeing their primary water treatment plant being modernized this year at a cost of $40 million to handle current and future population growth.

Keeping drinking water clean and safe for an ever-growing metropolitan area demands a treatment plant that can continually be upgraded to meet changing needs.

The vibrant communities in and around Charleston, S.C., are seeing their primary water treatment plant being modernized this year at a cost of $40 million to handle current and future population growth.

Construction crews are busy at the city's Hanahan Water Treatment Plant performing another in a long series of upgrades to the facility since it was first opened in 1904. The plant currently provides clean drinking water for about 400,000 area residents.

The work crews at Hanahan are under the expert leadership of PC Construction Company, based in South Burlington, Vt. The veteran firm works up and down the East Coast and maintains a strong presence in South Carolina, while maintaining a warehouse/yard in Raleigh, N.C.

As a matter of fact, building and upgrading waste water treatment facilities makes up about two-thirds of PC Construction's varied portfolio, according to company vice president Brian Walker. That is more impressive when you consider that the company averages about $550 million in volume each year.

The major task at hand at the Hanahan plant is to replace one plate settler basin and add two more at the site just north of North Charleston.

By way of definition, plate settlers are alternatives to the standard settling tanks used in many water treatment facilities. They utilize a series of inclined plates to separate solid organic waste, like bacteria and sediment, from water and filter that waste into basins, which aids in the overall treatment.

The process begins at Hanahan when raw water from the Bushy Park Reservoir and the Edisto River is pumped into the plate settler. As the solids begin to settle onto the plates, they then accumulate in collection hoppers at the bottom of the plate settler. That sludge is then drawn off at the bottom of the hoppers and the filtered water exits the basin at the top over a weir, or low dam.

From there, the water goes through a series of purification processes to make it potable before it is piped into local homes and businesses.

According to the Charleston Water System, the planned capacity of each new plate settler basin is 20 million gal. per day. The addition of the three new basins will increase Hanahan's total sedimentation capacity up to 139 MGD, which will match its existing filtration capacity.

Set to Be Complete Next Spring

Walker and his people have been doing earthmoving and concrete work for about seven months and the entire project is on schedule to be completed by next April, he said.

"This is largely a replacement project," Walker explained. "Hanahan has had an existing sedimentation basin for treating the water, but now it has reached the end of its functional life, so we are adding a new plate settler basin. We will then demolish the old basin and put in two new basins. Once we build the new Basin 7 and put that in operation, we can take the old one down.

"The new settler basins are the primary part of the job, but we are also doing upgrades to the solids-handling work facilities at the plant, such as connections to the plate settler basins. "

PC has between 25 and 30 people working at the site now, most local workers, but Walker said that when this first phase — the construction of the new Basin 7 — is finished and operational in the fall, they will then move onto the next phase after the first of 2018 when about 60 folks should be working on the job.

Earthmovers and Cranes a Must

PC Construction is self-performing the entire project, save for a few subcontractors for rebar and electrical work, and it has brought in all its own equipment from the company yard in Raleigh.

The major pieces of equipment working at Hanahan include a Caterpillar 930K wheel loader, a Cat 315F and a 330 excavator and a Cat D5 dozer. In addition, Walker identified a Volvo ECR58 Midi excavator and a Terex HC110 lattice boom crawler crane as being on site.

The crane is being used for form work, as well as rebar and concrete placement for the new plate settler basins, he said.

"We have recently completed the excavation for the first new basin," Walker said. "Now, we are running underground utilities on site. Those are the two big earthmoving parts of the job. We are also in the middle of doing all the concrete work for the new basins."

One complicated element to the project was working out how to build the new basins around the plant's existing utilities.

"High-voltage overhead electrical lines run through the plant, as well as underground utilities that move through the area," Walker said. "We did a lot of logistics planning with regards to working around those utilities and not damaging them. It is an old plant, the second-oldest existing water-treatment facility in the state of South Carolina. The excavation at the site is complicated and we need to be very careful not to damage any of these utilities due to the plant's age and the fact that it needs to stay operational at all times."

The reason for the needed increase in Hanahan's basin capacity is quite simple: a booming population growth.

Charleston and North Charleston, as well as other nearby towns, are rapidly growing communities that have attracted people of all ages to South Carolina's sun-soaked Low Country. In addition, a number of military bases and facilities are located in the area, meaning that soldiers, sailors and airmen, as well as their families, have all moved there.

With water treatment facilities being such a big part of his business, that type of population increase also has fueled PC Construction, Walker said.

"Our business is driven off growth, so if an area is seeing an influx in population, that often means more water-treatment plant projects need to be built or modernized," he said. "Another major factor in our business is the increasing number of plants that have met the end of their useful life and need to be replaced. It used to be that increased government regulations would require treatment plants to be upgraded, but now, though, we are not seeing that as much.

"You can find water-treatment plants that we have built all along the East Coast, from a facility in Brunswick, Maine, all the way down to one in West Palm Beach, Fla. It is all from population growth and aged infrastructure."