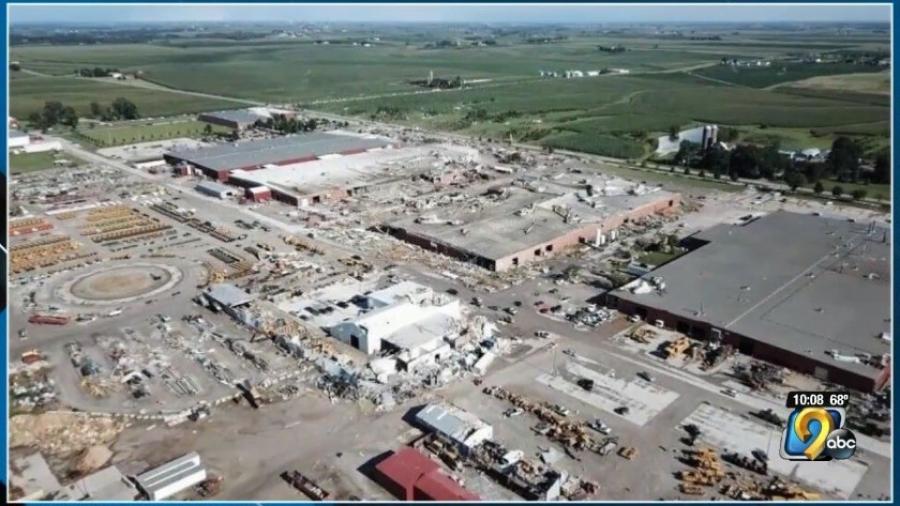 The two plants that were damaged in the event will slow the company's operations, and according to officials, its waste management facility has been lost completely. (Photo Credit: ABC 9)

Two Vermeer plants were severely damaged in a series of tornadoes that ripped through central Iowa during the afternoon of July 19.

Around 400 people had gathered at the company's facility in Pella, Iowa, to celebrate the company's 70th anniversary when the tornado alarm went off, the Des Moines Register reported.

“All of a sudden, like, big tubs full of metal and cars started flying by the window, and that's when we realized it was bad,” said David Ayala, a worker who was inside building 5 at the time of the tornado. “And then all of a sudden, the lights went off and everyone got to the floor, and the roof next door and the wall came off, and that's when everybody started freaking out.”

Seven people went to the hospital with minor injuries after the tornado, and all have since been released, said Vermeer CEO Jason Andringa.

Pella police praised the company for effectively following its emergency response procedures and getting workers to safety, the Des Moines Register reported.

The two plants that were damaged in the event will slow the company's operations, and according to officials, its waste management facility was “a complete loss,” the company said in a news release. In addition, Vermeer said that three buildings will need to undergo structural assessments before determining the extent of their damage, and its effect on operations

The tornado that hit Vermeer was one of at least five that caused damage throughout the state that day, the Des Moines Register reported.