Colorado’s Yule marble is celebrated as one of the purest marbles ever quarried. 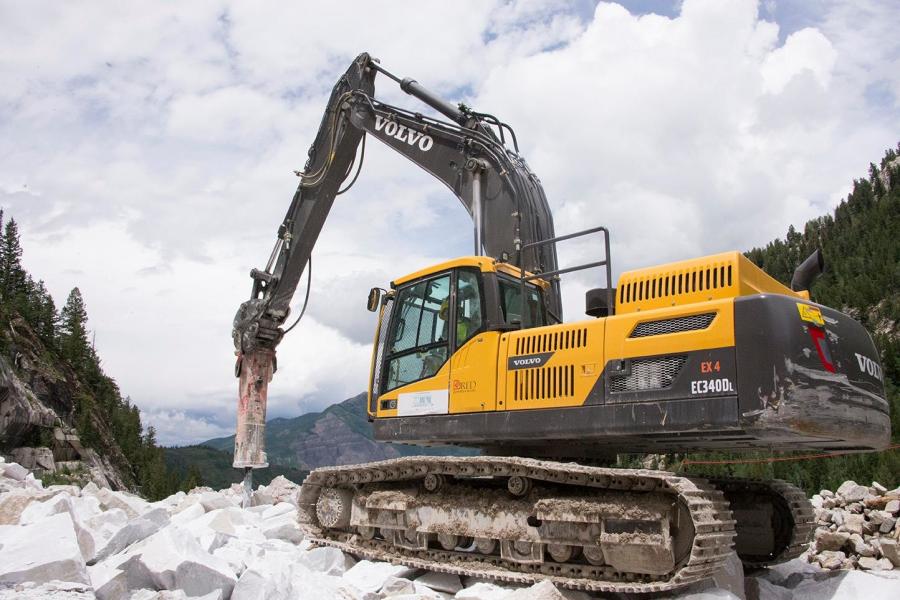 To meet the growing demand of the Calacatta Lincoln marble, Colorado Stone Quarries employs a crew of 40 in its year-round operations.

Cited as a rival to the Italian marbles of classic notoriety, Colorado's Yule marble is celebrated as one of the purest marbles ever quarried, and has adorned many legendary monuments and buildings, including the Lincoln Memorial and Tomb of the Unknown Soldier. Although its almost snowy whiteness and uniformity once made it a sought after stone, quarrying the Yule marble was deemed uneconomical due to its remote location. By the mid-twentieth century, production in the state ceased and remained dormant for nearly 50 years.

However, excavation of the exquisite stone is experiencing a renaissance, due to Carrara-based R.E.D. Graniti. As the leading stone producer in Italy, R.E.D. Graniti assumed ownership of the Colorado Yule marble quarry in 2011. R.E.D Graniti operates the quarry, located in the aptly named city of Marble, Colo., under the name of Colorado Stone Quarries. Today, the company holds all mineral rights to a 26-hectacre section of land, known as Treasure Mountain, rich in high-quality marble.

Diamond in the Rough

During the assessment of the quarry, general manager Daniele Treves and quarry master, Stefano Mazzucchelli located a new vein of stone. To access this new source of stone, the Lincoln Gallery, named after the Lincoln Memorial, was unearthed. This new vein, Calacatta Lincoln, is now the top-selling stone worldwide for R.E.D. Graniti.

“We calculate that we have 1.9 million [cubic yards] of marble remaining here,” said Treves.

To meet the growing demand of the Calacatta Lincoln marble, Colorado Stone Quarries employs a crew of 40 in its year-round operations. Because the stone is extracted with precision cuts, rather than blasting, the company relies on a fleet of 30 machines that includes Volvo L350F, L330E, L120E and L90E wheel loaders, an ECR58D compact short swing radius excavator, EC340D and EC480D crawler excavators and an A35D articulated hauler.

Inside the Lincoln Gallery, crews work on two levels. On the lower level, after the initial cuts are made, a Volvo EC340D or EC480D excavator slides deftly into place and uses its bucket teeth to loosen the stones, gently placing them onto the gallery floor for the L350F wheel loader to load out. Once the large blocks are removed, a Volvo L90E wheel loader with pallet forks repositions the saw for the next round of cuts. On the second level, the marble blocks are skillfully sliced from the rock face and extracted using the block forks on the L350F.

The two Volvo L350F wheel loaders are the mine's workhorses, clocking up to 10 hours a day.

“Both of the L350F loaders have the Volvo standard duty block handler kit and forks, which can carry up to 65,000 pounds,” said Troy Langston, of the Volvo CE dealership Power Equipment Company, based in near-by Grand Junction, Colo.

The L350F is known for its high capacity and outstanding rim pull. The standard Volvo block handler kit boosts capacity for lifting and withstands the rugged conditions of block handling. Because these loaders use the same linkage systems as standard machines, they can easily swap tools and be used as bucket handlers to load trucks; an advantage over competitor machinery equipped with shortened booms.

Colorado Stone Quarries replaced its entire fleet of equipment when it purchased the mines. When the operations management reviewed bids, bottom line price was not the only factor taken into consideration. Total cost of ownership and dedicated dealer support influenced the decision to buy Volvo machines, especially due to the heavy duty cycling work of the loaders and the remote location.

Fuel economy sold the loaders to management, but the Volvo cab won the praise of the machine operators.

“I move rock for 10 hours each day, so I like the comfort of the Volvo wheel loader,” said operator David Porter. “My back doesn't hurt, and it is easy to steer with the joystick controls. We are picking up blocks weighing more than 50,000 pounds and the power is still there.”

Two Power Equipment Company service technicians carry out preventive and routine maintenance on the Volvo units and other equipment, including the stone saws.

“We chose Volvo equipment for the quality of the machines and the uptime support we receive from Power Equipment,” Treves added.

The Volvo L350F wheel loader handles the marble blocks with ease due to impressive lifting forces.

As Gold as Gold

Once the marble blocks are selected and carved from the face, they are washed and trimmed to size. Each block is inspected and approved, then loaded onto flatbed semi-trucks and hauled to a logistics stockyard in Delta, Colo. From there, the majority are sent by rail to Norfolk, Va., and transferred to containers ready for shipping to Italy. When the stone arrives in Carrara, it is sold to companies specializing in the supply of cut-to-size material for projects all over the world.

R.E.D. Graniti's marble expert, Marco Pezzica, travels to Colorado several times a year to inspect and cherry-pick the blocks that are ultimately exported.

“It's very important that production matches the market request,” he said.

In addition to Calacatta Lincoln, Treasure Mountain also yields Statuario Colorado and Calacatta Golden. Pezzica describes a perfect example of Calacatta Lincoln as bold white with brown and gray veining and slight brownish fading of the surrounding veins. “This is what makes our material famous — and expensive — and the only place in the world we produce exactly the same type of stone as the original in Carrara is here in Colorado,” he said.