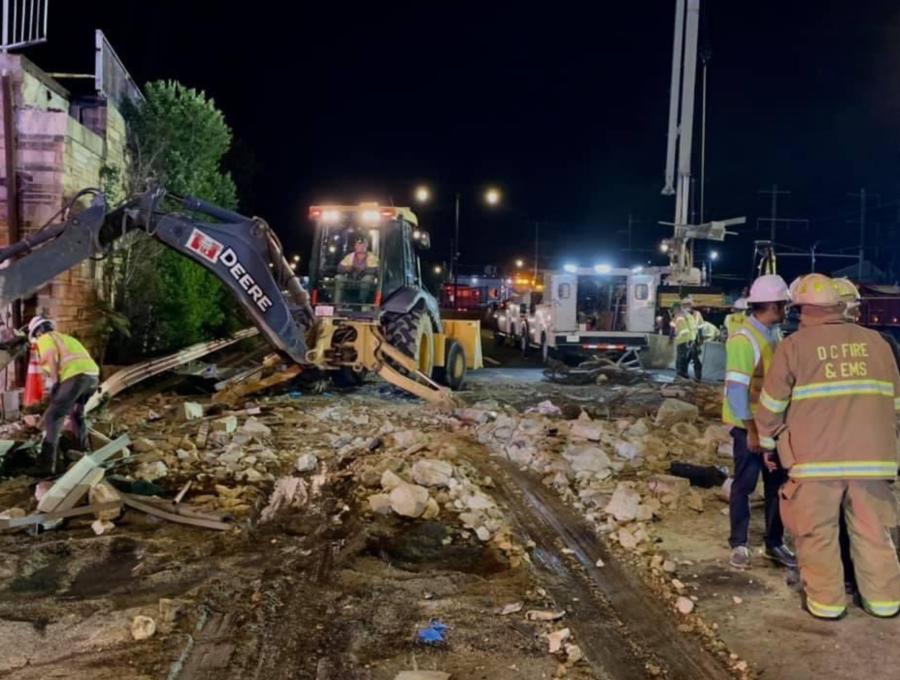 An incident report from D.C. police concluded that a boom truck working at a nearby construction yard got on the interstate but forgot to lower its boom, which collided with the bridge, causing it to collapse.

Both lanes of Interstate 295 in Northeast Washington D.C. reopened to traffic early Thursday morning, June 24, after crews worked through the night clearing debris from the roadway following the collapse of a pedestrian bridge on June 23.

The District Department of Transportation (DDOD) confirmed to WTOP that all lanes of traffic at the accident site were able to reopen just before 2 a.m., several hours earlier than first predicted and in plenty of time for Thursday's rush hour commute.

FOX 5 reported that six people were assessed for injuries at the scene of the collapse and four were transported to a local hospital. The highway was immediately closed in both directions as emergency crews worked to treat the injured and clear damaged vehicles. Fire officials said no serious injuries or deaths were reported.

D.C. officials also clarified the status of the bridge after the collapse, which shut down the major roadway for thousands of drivers and causing long traffic delays.

A few hours after the accident, city leaders said that the bridge on Kenilworth Avenue (known locally as D.C. 295) in Northeast Washington was last inspected in February and no structural concerns were discovered.

However, on June 23 evening, the mayor's office said it "misstated" the condition of the bridge when FOX 5 questioned its structural integrity.

"During today's initial readout to the media, we misstated the condition of Bridge 66," Deputy Mayor for Public Safety and Justice Chris Geldart said in a statement.

Geldart explained that after speaking with bridge engineers, it was learned that the structure had been given a 5 or "fair" rating on a national scale from 0 to 9 in 2019.

But, in its most recent inspection, it received a 4 or "poor" rating.

"A 4 means that there are some issues with the bridge that it needs to get into our capital projects," Geldart said to WTOP-FM, Washington's radio and online news source. He added that any bridge with such a rating does not necessarily mean it is in imminent danger of falling if not struck by a vehicle.

Six other bridges in D.C. have a score of 4 and need to go through a capital project to start repairs or rehabilitations, WTOP reported.

Geldart told the news outlet that his office has the city's bridges inspected every two years and when they begin to fall into disrepair, and are rated below a 4 on the scale, emergency repairs are initiated.

"But in this case, this bridge was just rated at a 4 in May, when the report was completed, so we were [planning] to make it [one of our] capital projects for next year," he explained.

An incident report from D.C. police concluded that a boom truck working at a nearby construction yard got on the interstate but forgot to lower its boom, which collided with the bridge, causing it to collapse, according to WTOP and FOX 5.

Geldart said investigators were able to speak with the driver of the truck at the hospital June 23, according to FOX 5. The driver's account of the incident, plus other evidence that was gathered at the scene, led them to make the determination.

Interestingly, a press release issued by the DDOT on May 27 announced that the pedestrian bridge over Kenilworth Avenue at Lane Place was scheduled to undergo "preservation and repair activities" from May 27 through June 18. WTOP noted, however, that the transportation agency has not yet confirmed if the project was completed or if the work played any role in the collapse.

Geldart said it was his understanding that the pedestrian bridge's clearance was 14 ft., and that the truck would have been able safely clear the structure. Whether the load it was carrying was low enough to pass underneath was unclear, he told WTOP.

There may also be issues with the company that owns the truck that hit the bridge, FOX 5 reported. According to U.S. Department of Transportation records, the truck's DOT number, which is required of certain commercial vehicles, is inactive.

An employee who answered the phone at Frank's Scrap Metal in Silver Spring, Md., would not give a statement but did tell FOX 5 the driver is OK.

In the meantime, Washington's Metropolitan Police Department will continue to lead the crash investigation.

It is not known how long it will take to rebuild, but DDOT crews and engineers began examining the accident scene June 24 with an eye toward building another pedestrian bridge.

Siraaj Hasan, chair of Advisory Neighborhood Commission 7D02, told WTOP, "This happened literally at the end of my street; I could see it from my house."

He said the old bridge's location, near the Deanwood and Minnesota Avenue Metro stations, made it an important, and popular, link for area residents.

"Many people use the bridge as a walkway to get to and from the Metro," Hasan told the news outlet. "It is a very highly utilized bridge."

He said that he and his neighbors "have been voicing our concerns about the bridge. I mean, it's aging infrastructure — cracks in the concrete [and] rusted steel."

"Governments are very good at creating new infrastructure, but not so good at coming up with the money to maintain infrastructure after it's been created," he said.

No Major Injuries, But Plenty of Traffic Backup

Inevitably, the shutdown of D.C. 295 caused sizable delays on the expressway June 23 afternoon and evening.

WTOP Traffic Reporter Dave Dildine said the bridge collapse led to "major delays on New York Avenue through Northeast and Northwest D.C., as well as in the 3rd Street Tunnel."

Gail Thurston told the news source that she was getting ready to merge onto Kenilworth Avenue when she saw the collapse and witnessed the southbound side of the bridge fall onto the roadway first.

"I couldn't tell if anybody was trapped or hurt," she said. "All I know is, everybody around me who had stopped were trying to dial 911 and nobody could get through."

Geldart said it was fortunate no one was more seriously hurt.