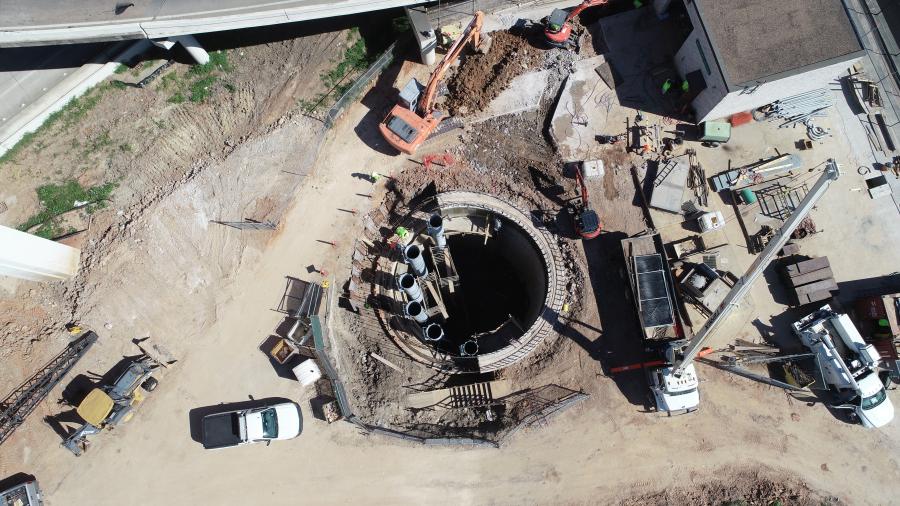 The $259 million reconstruction of the interchange connecting Interstate 69 to the 610 West Loop near the Galleria is being constructed by Williams Brothers Construction.

Williams Brothers Construction Co. Inc. is now in Phase 4 of the seven phase, $259 million, I-610 West Loop/I-69 Southwest Freeway Interchange improvement project in Houston that began in late December 2018 and is expected to be completed in 2024.

According to officials, the project will improve safety and mobility, reduce congestion and upgrade the interchange to current design standards. 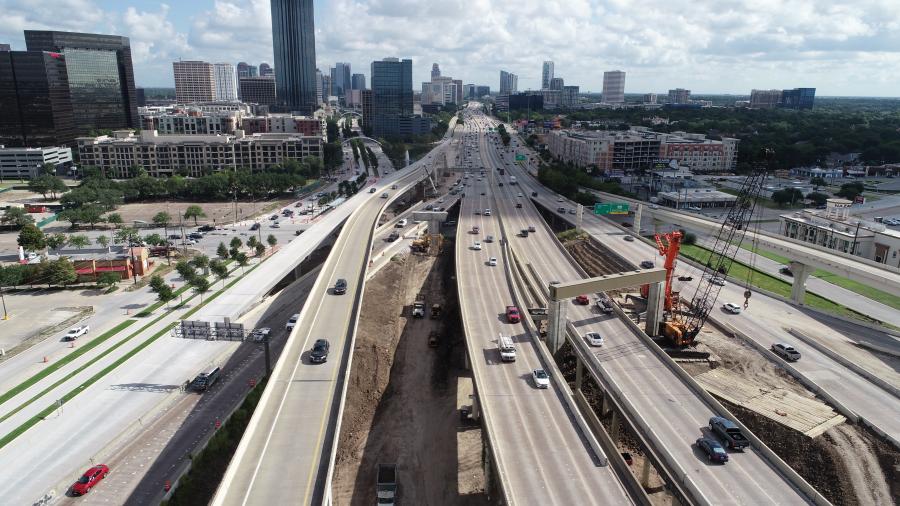 "One of the biggest design challenges for this project is the lack of space throughout the interchange," said Danny Perez, a TxDOT public information officer of the Houston District. "In order to resolve this issue, many of the proposed connectors were phased. This helps prevent closing multiple connectors at the same time. This also allows for shorter closure durations for the proposed connectors that are in the same footprint as the existing.

"[The project will] address several issues – one-lane direct connectors that are over capacity, projected growth increasing demand, lack of shoulders, low vertical clearances, below minimum sight distances and crashes in merge areas. I-610 West and I-69 South are heavily congested during peak hours, and though the I-610 West Loop is ranked as the number one most congested highway in Texas, this project aims to change that statistic." 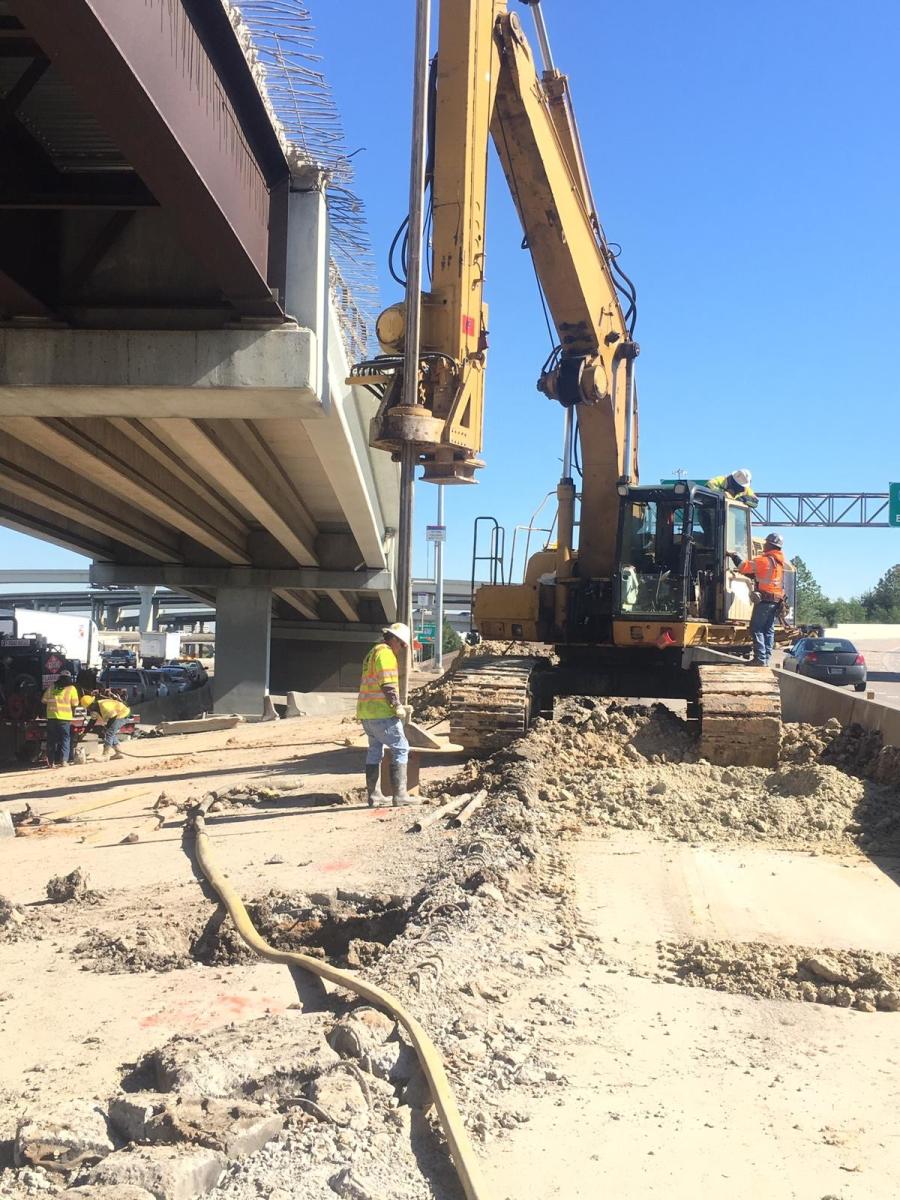 "This will certainly impact the traveling public because the proposed connectors are limited to the same footprint as the old in certain locations," said Perez, "meaning that when these closures take effect, the traveling public will have to utilize major detours. The good news is that 2021 will also bring the opening of the new IH 610 northbound to IH 69 southbound connector, as well as the newly configured IH 69 southbound exit ramp to Chimney Rock Road.

"The project is being built in phases as some direct connectors have to be built before other phases of the project can be linked to them," he added.  "A detention site has been established between the IH 69 mainlanes and Westpark Drive west of IH 610. We are making great progress and taking every opportunity to accelerate work where we can. Our goal has always been to complete this project as quickly as possible while also minimizing impacts to the traveling public."

The tight work zone has its challenges, but the project team is making every effort to overcome these challenges, according to Perez.

The new I-69 northbound connector ramp to I-610 southbound was opened last May.

"This included the opening of the Fournace exit from the connector ramp," said Perez. "Motorists coming from Sugarland that want to go to Bellaire, for example, could use this exit ramp without having to get onto I-610. This work required lots of coordination with the contractor, Transtar and TxDOT in order to make sure the public was aware of the many and major traffic switches required to construct this connector."

The new I-610 southbound exit to Fournace opened in late May.

"Unfortunately," said Perez, "many unknown utilities affected this exit ramp. Working with the contractor and the utility companies helped to resolve this."

Nearby, the new I-610 southbound entrance ramp from Hildalgo/ Westheimer was opened to traffic around the same time.

Crews are close to completing the demolition of the old I-69 northbound connector ramp to I-610 southbound.

"This will allow for the work to progress on the IH 610 northbound to IH 69 southbound connector," said Perez. "The existing IH 610 northbound to IH 610 southbound is still up as the new one has yet to be opened but again, coordinating with all parties [contractor, Transtar and TxDOT] ensures that everyone is on the same page [and] that the message of traffic impacts were relayed to the traveling public."

Over the summer, the IH 69 northbound frontage road between I-610 West Loop and Newcastle was completed, which included the Newcastle Drive intersection.

"This required lots of coordination with the nearby companies along IH 69 northbound frontage road," said Perez. "One of which was the Houston Chronicle. Meeting with the business owners in person and speaking with them to help us understand their concerns and how we could mitigate those concerns was very helpful. In turn we were also able to help explain what is to be expected and the potential durations to the business owners." 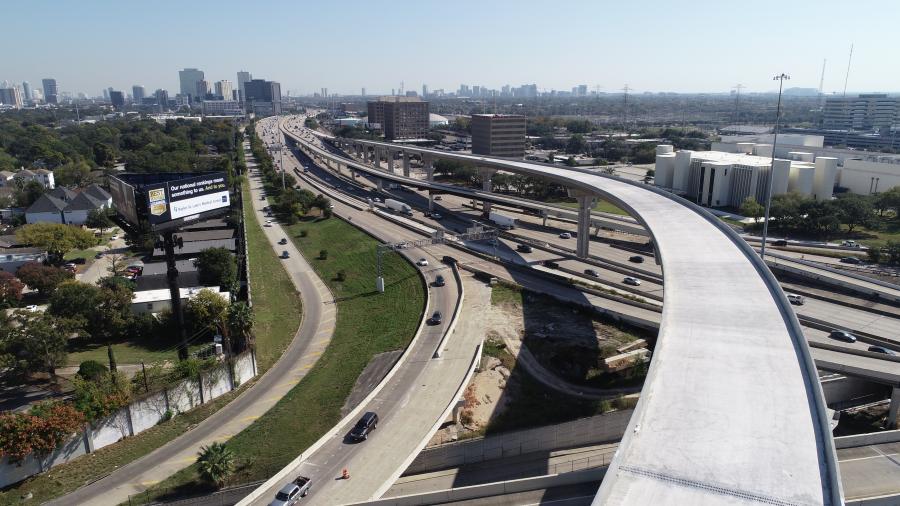 The drainage infrastructure being installed along the east side of IH 610 includes new trunk lines between the mainlanes and the frontage road.

"This work was completed in late 2020," said Perez. "Coordination with business owners in the area and even residential facilities was key to the success of this operation."

Cat excavators and motor graders were used to help move prefabricated concrete pieces and dig out areas for infrastructure installation.

The expected lifespan of the new roads and bridges and infrastructure is approximately 20 years.

"We're addressing safety issues by adding shoulders where there were none, increasing sight distances, reducing weaving at decision points and increasing connectors to two lanes," said Perez.  "The design supports the construction by phasing closures in order to minimize the impact on the traffic while providing safe work zones for the contractor to work."

"The I-69/I-610 interchange is a major connection point of two extremely busy highways serving the Greater Houston area," Perez added, pointing out that safety, mobility and congestion will be addressed by "widening the connector ramps to two lanes, increasing sight distances and vertical clearances, and providing remedies to eliminate weaving. The work also calls for adding shoulders on the I-610 West Loop mainlane bridge over I-69 and adding detention ponds."

In terms of financing, $87.5 million has been provided by Texas Clear Lanes program, with the remainder from state and federal funds.

On a daily basis, the interchange carries approximately 300,000 cars and trucks and when delivered, will be able to accommodate 450,000 vehicles and meet traffic demands for approximately the next 20 years. The infrastructure upgrade was designed by multiple consultant engineering firms, as well as TxDOT. 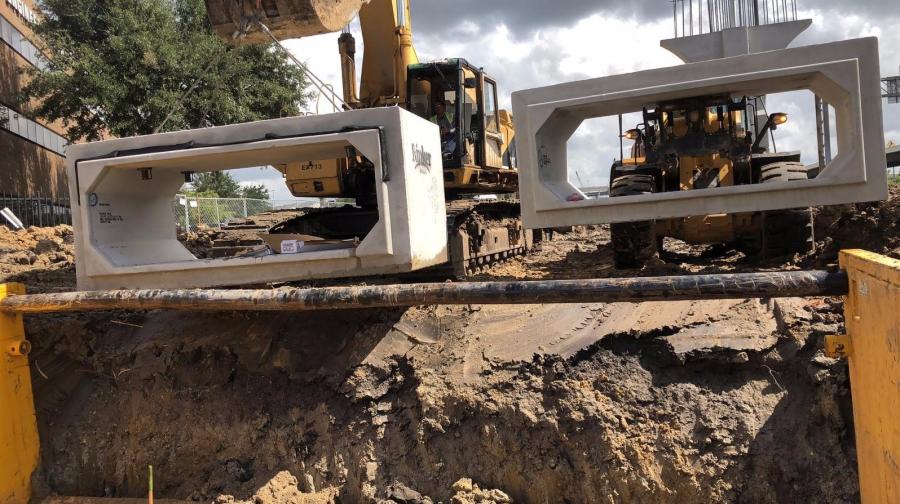 Congested already, the construction at the interchange is having major impacts on traffic and TxDOT is doing its best to minimize them. The phased construction has resulted in night and weekend road closures.

"The project has incentives and disincentives to encourage the contractor to complete various phases sooner than anticipated," said Perez.

"Temporary detours have been required as a means of traffic control," said Perez, "but all business and residential access within the project limits have remained open during construction. Certain areas within the interchange have and will always have high traffic counts, such as Richmond Avenue, but for the most part people are utilizing the traffic plans and slowing down. Most of this work will happen during nights or weekends. Not just to prevent traffic backups, but also to keep both the traveling public and the contractor safe."

The DOT is employing Smart Work Zone technology, which is the application of computers, communications and sensor technology to freeway transportation.

"This system obtains and analyzes traffic flow data in real-time and provides frequently updated information to motorists," said Perez. "It is portable and allows its installation, with minor modifications as necessary, at different locations. It also operates in an automated manner with as minimal supervision by TxDOT personnel, and provides accurate and reliable information, keeping in mind the serious consequences of misinforming motorists in work zone situations.

"[It] better informs motorists and reduces their frustrations and encourages them to take alternate routes, reduces congestion and allows for more free flowing traffic," he added. "It will also help to clear incidents more quickly. It will certainly make work zones safer for highway workers and motorists."

Extensive public consultation was undertaken by TxDOT in 2012, 2015 and 2016 via open houses and public meeting summaries. This was important in light of all the other ongoing projects in the Greater Houston area that have many general contractors and subcontractors on-site at many locations.

This project will not result in an increase to the base flood elevation to a level that would violate floodplain regulations and ordinances. 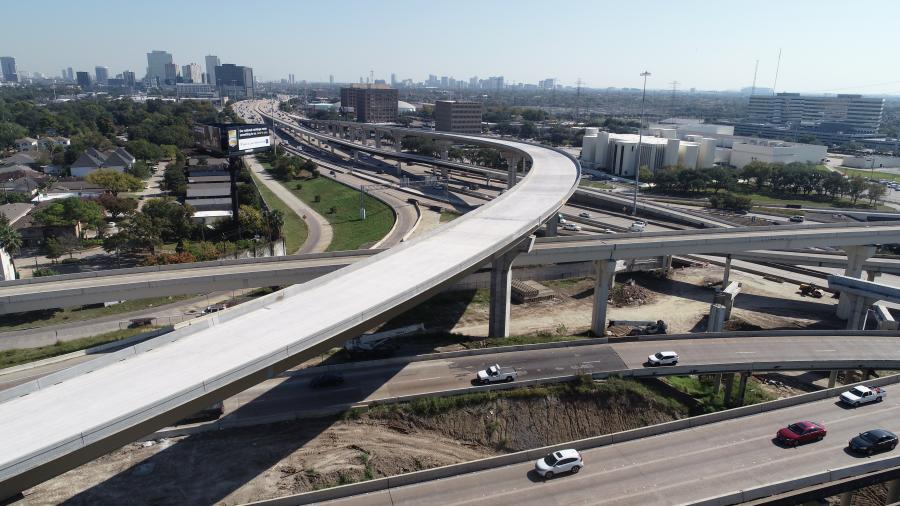 "The hydraulic design and detention facilities for the project are in accordance with current TxDOT and Federal Highway Administration policies and standards," said Perez, who pointed out that sight distance and vertical clearances are being modified to fit more updated standards by raising the elevation of the new connectors.

As noted, the project has early completion incentives built into the contract for certain critical construction phases to encourage the completion of work ahead of schedule, as well as disincentives to monetarily penalize the contractor for not completing work as scheduled.

"Incentives have been proven to help the contractor finish key construction points on time and sometimes even earlier than expected," said Perez. "TxDOT and the contractor are able to resolve any conflicts or issues quickly due to its good and long-standing relationship."

Additional equipment being used includes various types of cranes, such as crawler cranes that can be easily moved about to help with various operations where large pieces of concrete had to be lifted and placed; excavators and dozers from several manufacturers; various types of loaders; an assortment of rollers and pavers; and other standard pieces of iron.

Being based in Houston, Williams Brothers is able to dispatch mechanics to the work site from its  shop/yard and nearby construction sites.

The company purchases and rents equipment from local and regional dealerships. CEG