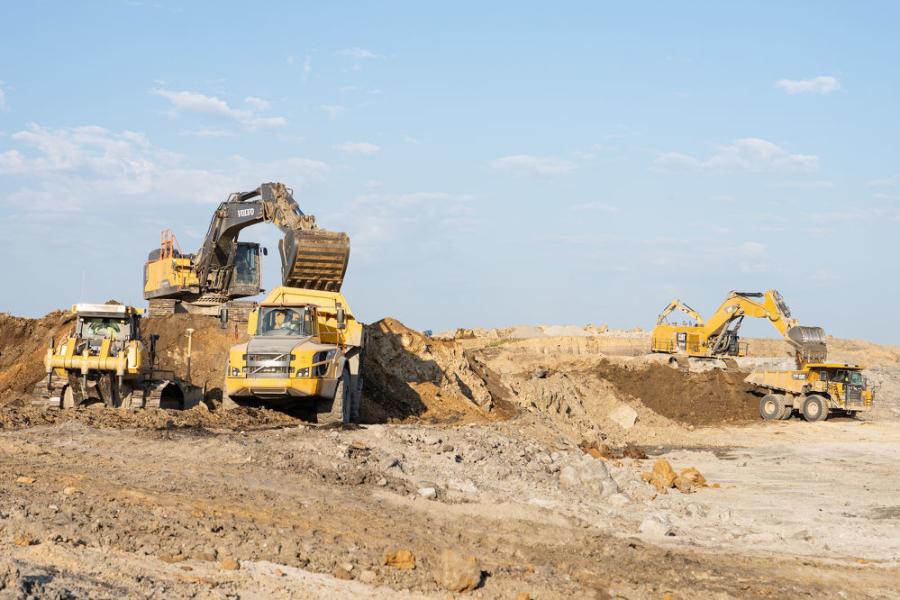 Wolfe's Excavating LLC started like a lot of businesses — small. Alex Wolfe started the company in 2007 with just a single-axle dump truck, a trailer and a mini-excavator.

Since then, the business has grown exponentially and Wolfe's has completed some large scale, high-profile projects. Wolfe also started an aggregates company, Ace Aggregates LLC in early 2020. Ace's quarry is located in Philippi, W. Va., and the business also has a materials yard in Clarksburg, W. Va. 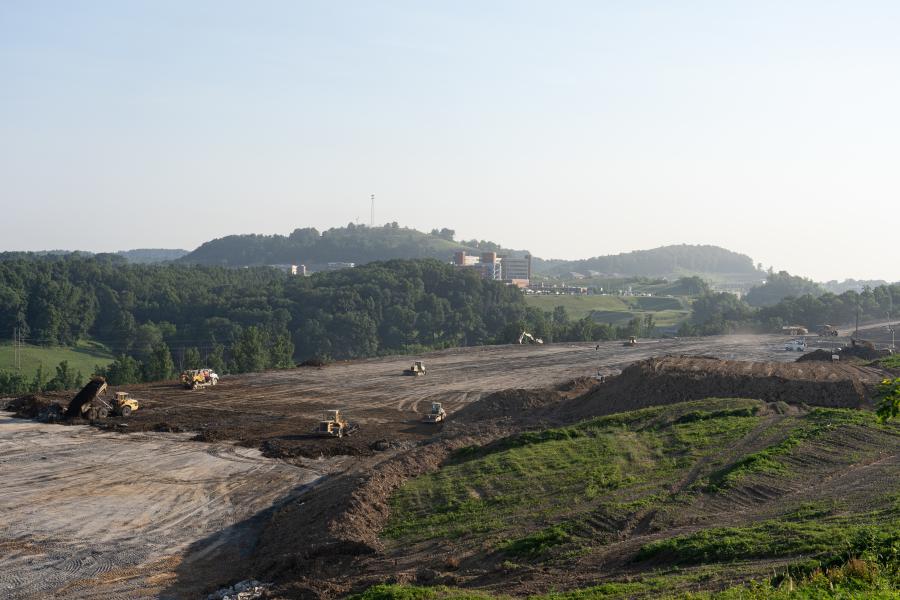 Recently, Wolfe's Excavating has been working on part of the $1.4 billion multi-use "Charles Pointe" campus. The site is located at exit 124 on I-79 where Route 279 connects to I-79. Wolfe's scope of work includes all grubbing, clearing, creation of environmental controls, sediment ponds, mass excavation, storm water management, sewer, water, underground communications and power, curb, gutter and paving.

"We perform all of the work possible in-house," said Jason Manning, project manager of Wolfe's Excavating.

Blasting is provided by Wampum Hardware, Compost Filter Soxx by Filtrexx, Hydroseeding by Sand Hill LLC, and curb and gutter by Cannon Curb. All aggregates for the project will be provided by sister company, Ace Aggregates. The work is not intrusive on the surrounding area. The total cost for Wolfe's work is $18 million. The company has completed similar value projects and larger scale pipe projects, but this site is the largest as far as earthmoving.

Charles Pointe is a mixed-use site, with commercial, residential and recreation. Currently, only a third of the project has been sold for development, slated to become a Menards home improvement store. The Menards is expected to bring economic benefits in addition to new jobs for the surrounding area. Of note, the project critical path for the Menards was completed ahead of schedule.

Wolfe's began the project in October 2019 by land clearing, grubbing and building the access road into the site. Since getting into the bulk of the project, Wolfe's runs both a day and night shift on the project. Night shift begins on Sunday evening and ends Friday morning while the day shift begins Monday morning and ends Friday evening. Day shift runs with 25 people while the night crew consists of 15, plus maintenance crews for both shifts. 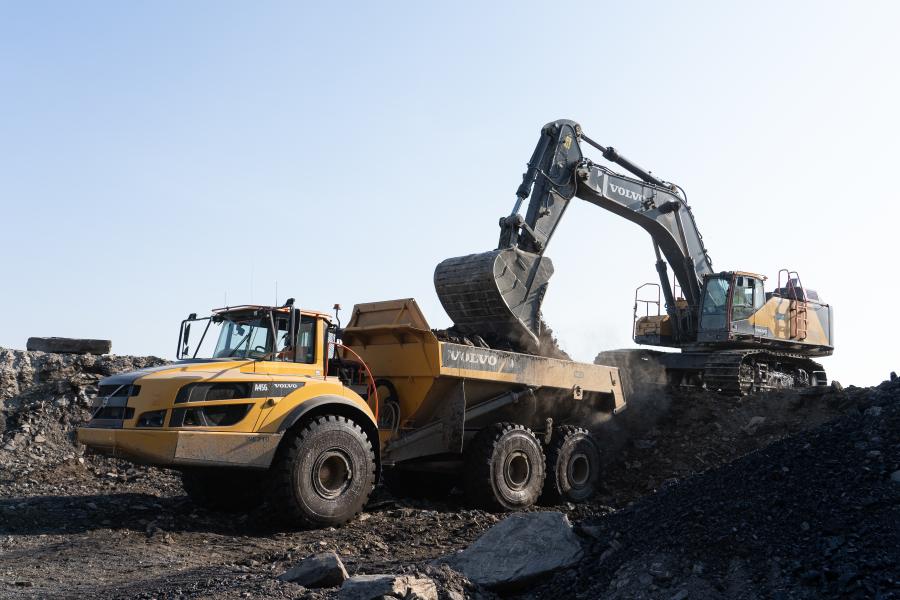 The site is approximately 150 acres in size and once complete there will be 70 acres of useable pad space. The project consists of 4.1 million cu. yds. of material being relocated throughout the site. Some of the tallest fills are nearly 135 ft. in height. Other than topsoil and colluvial material, which needed to be reworked, the site is pretty much balanced. Another significant project on the site is a 155-ft. cut near a 90-ft. tall active airport radar tower. This was accomplished by means of blasting and caused very little disruption on the site side and the airport side. There have been more than 200 shots on this project, including small diameter, large diameter and pre-split. The largest shot to date produced close to 35,000 cu. yds. of material. Wolfe's said Wampum Hardware, the blasting company, has been a huge part in making sure the project stays on schedule.

"The biggest challenges have been the 155-foot tall pre-split cut face below the active radar tower as well as the mine spoil material we ran into" said Manning.

The pre-cut split face blast was challenging because crews had to make sure they caused no damage to the tower itself or to any of the power and data cables coming and going to the tower. Manning also added that this blast went much better than originally anticipated and caused very little disruption to the airport or the job site. This particular spot on the site also is where the new four-way intersection providing access to the site will be located. The mine spoil material also presented a challenge as it had to be worked and reworked into engineered fill for use on the building pads. There also are a few seams of coal running through the job site, which provide another challenge.

When Wolfe's was awarded the contract, a decision was made to add additional equipment to its fleet. A Caterpillar 6015B and four Caterpillar 775G haul trucks were purchased from Cleveland Brothers CAT to assist with the massive amount of earthmoving involved with the project. The rest of the equipment was already part of the fleet. Also on site are multiple Volvo A45Fs and Gs, a Volvo EC750EL, a Volvo EC480, multiple Caterpillar excavators, such as 336Es and Fs, a 349F, John Deere 950K dozers, a Caterpillar D8T, a Caterpillar D10T, a Caterpillar 140M2 grader and a handful of brush clearing equipment including a Caterpillar 522B tracked feller buncher and FAE PrimeTech PT-300. 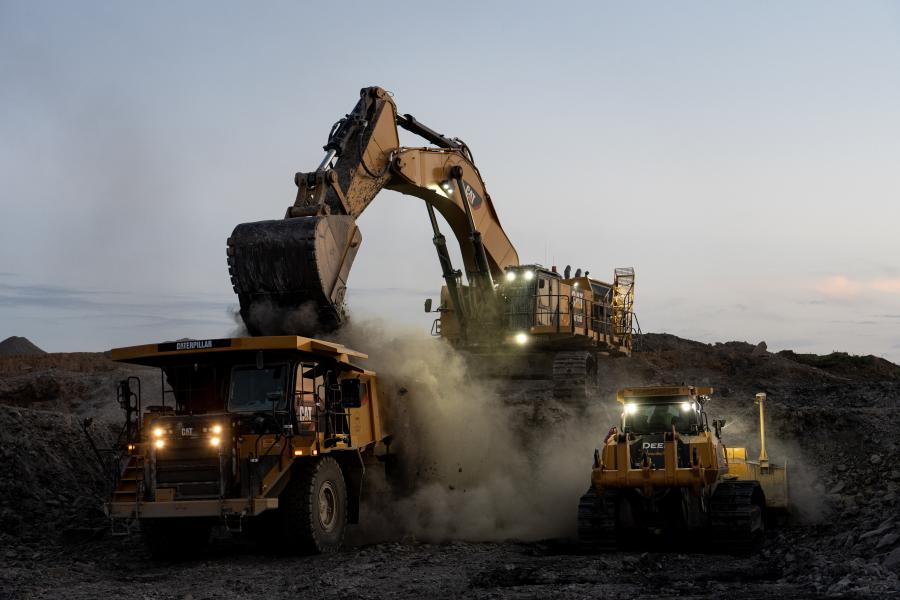 The Cat 6015B is paired with the 775G haul trucks to move as much material as possible. It is not often that a 6105B (classified as a hydraulic shovel by Caterpillar) and 775Gs on a job site as they are normally found in mining applications due to their size. However, many heavy civil and heavy highway construction companies, including Wolfe's, have found the 6015B to be a critical asset on job sites. Wolfe's said the 6015B has been a significant factor in keeping the project running on schedule.

The Volvo EC750E and Volvo EC480 are paired with the Volvo 45-ton trucks. Once loaded, the haul trucks take the material to a pad site where John Deere 950Ks and a Cat D8T grade the material. The dozers also are responsible for cleaning up material near where the excavators are loading the trucks. A lone Cat 140M2 grader provides grooming of the haul roads because it's a decent distance between the loading site and dump site. Maintaining the haul roads is important as it extends tire life on the haul trucks. The D10T works with the excavators up top during the day, mostly feeding them material. It also is responsible for cutting in certain sections of the site, in addition to cleaning up the upper part of the site.